CHICAGO – Friday was the kind of day that restored my faith in wrestling-that it has a past and it has a future. A little research and a little Ring of Honor did the trick.

I’ll be honest. Coming to Wrestlemania in Chicago probably seems like a dream to diehard fans out there. However, to me, it’s work, and often frustrating work. Even more than normal, WWE tries to control the spin of its product, inviting in dozens of publications and TV and radio stations that rarely give pro wrestling the time of day. 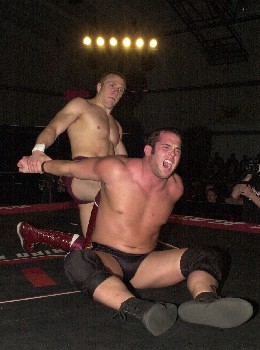 So a 10-hour drive may result in little more than live reports from Hall of Fame event, and the Big Time show itself. In time, SLAM! Wrestling readers will know how I fared. I’m thinking positive.

But I doubt that anything will top Friday. Five hours in a library, followed later by more than five hours of entertaining, innovative, passionate and breathtaking wrestling — it’s not everyone’s cup of tea, but I loved it.

The research came at the Joyce Sports Research Collection at Notre Dame University in South Bend, Indiana. The Jack Pfefer Wrestling Collection is housed there. Pfefer was a pro wrestling promoter for 45 years during his life, from 1894 to 1974, everywhere from Chicago to New Jersey.

Fortunately for wrestling historians, he was a notorious packrat. He kept everything — programs, posters, financial records, photographs, clippings, and so much more. But by far, the most fascinating thing he kept was personal correspondence from hundreds of wrestlers, fellow promoters, business partners, arenas and friends.

Sitting down with the Pfefer Wrestling Collection is a serious investment in time and energy. Its scope is overwhelming, and curator George Rugg and his staff deserve kudos for starting to catalog and organize the 100 cubic feet of materials that came into the university’s hands via former IWA promoter (and part-Chicago White Sox owner) Eddie Einhorn.

Most of the research will be tidbits in upcoming volumes of the Pro Wrestling Hall of Fame series of books for ECW Press, but having been there once, I know I need to go back again, and soon.

I got the same feeling from my first-ever Ring of Honor experience (ROH). Yes, you read that right. Until Friday night, I was a ROH virgin.

The show, held before over 1,000 people at the Frontier Fieldhouse in the suburb of Chicago Ridge, Illinois, was an absolute eye-opener.

ROH celebrates a pure, unadulterated joy of wrestling, and the show had a little of everything.

If it hadn’t been one o’clock in the morning when it ended, I would probably have said that the mat-based, adrenaline-pumping 56-minute main event where “American Dragon” Bryan Danielson kept his ROH world title by making Roderick Strong submit, was the best thing on the show. But if I feel as exhausted as the wrestlers, it’s hard to have that enthusiasm. The fans mostly stayed with the long match too, which both surprised me given the lateness of the hour, and pleased me that there is hope for non-gimmick wrestling. Strong and Danielson give it their all. There’s no other way to put it. The fans believed in them as warriors, not TV celebrities who are called “sports entertainers.”

It was the bout just before intermission, a titanic struggle between two factions from the Japanese Dragon Gate promotion that stole the show for me and many others. Photographer Mike Mastrandrea’s first words to me after the match, which he shot at ringside for SLAM! Wrestling, were “Thank you” for just getting him in to see the match. I’ll second that thank you to the Dragon Gate performers: the victorious Do Fixer team (Dragon Kid, Genki Horiguchi & Ryo Saito) and the defeated side, Blood Generation (CIMA, Naruki Doi & Masato Yoshino). I can’t even begin to describe the action, the countless near-falls, the death-defying action, the pageantry and sportsmanship. Suffice it to say that fans chanted “Please don’t stop” during the bout, as well as “this is awesome” during it and a standing ovation with “that was awesome” afterwards. I put down the notebook to do the same.

Fortunately for the rest of the wrestlers on the show, intermission followed the killer match. No man in their right minds would try to follow that. Luckily, ROH had imported some pretty good women wrestlers for an exciting six-way battle to get the fans going again after the break. Unlike, say, the Torrie Wilson versus Candice Michelle bout set for Sunday, this match was as real as it gets. Competing under the ROH-affiliated SHIMMER banner, MsChif came out on top over Lacey, Daizee Haze, Allison Danger, Rain and Melissa Anderson, who was probably the most solid of the six-pack and the least likely ever to end up in WWE-land. (Again, to her credit, that has something to do with being real.) As for MsChif, I never thought that green mist worked right with a woman until I saw you…

The ROH show wasn’t perfect. Besides being way too long for the end of a workday for most people, it was a little tough to understand for a neophyte like me. I can’t even really give a full account of the results, since the announcer wasn’t always clear and the events in the ring didn’t match completely to the program. I can say that Austin Aries is far more impressive in person than what he’s shown on TNA so far, that A.J. Styles is, well, phenomenal, Delirious was great fun and way over with the crowd, that Jack Evans is like the little brother you always threw around and that Samoa Joe rocks.

Apparently ROH Commissioner Jim Cornette has it in for hardcore wrestlers, yet two of them from CZW showed up not once, not twice, but three times to break up the momentum of the show. And if ROH is so anti-hardcore, then why was there a First Blood match, won by hometown boy Ace Steel over Chad Collyer? Likewise, what was the point of all the profanity? Using it once, with a real bad-ass like Homicide, can make a point. But when the first wrestler on the microphone swears, it ruins the rest of the show for this prude – and probably for the parents of the kids in the audience.

It’s also going to take a while to re-educate the general public. With WWE’s enforcement of a “wellness program,” fans are about to see differently-shaped wrestlers again. This is a good thing.

However, the general emphasis on size in the big league also results in the prejudice I saw Friday night: A Chicago Ridge police officer arrived came into the building, saw the diminutive Dragon Gate wrestlers standing behind the curtain watching the show, and smirked, “Are these guys wrestlers?” Buddy, they were that and much more. The whole show was full of guys who put it on the line to entertain, just as you put it on the line to serve and protect. How about a little respect?

So to both the University of Notre Dame and Ring of Honor, I say thank you, and quite enthusiastically, “I’ll be back.” (But unfortunately, I won’t be back Saturday night for Danielson vs Lance Storm. How dare the WWE Hall of Fame interfere!)