In his time as a pro wrestler, TNA star Bobby Roode has occasionally been referred to as “The Natural.” Of course, that’s on the grounds that the Ontario native took to the grappling game with relative ease during this training with Val Venis and Shane Sewell. But there is another “natural” side to Roode that not all fans get to see. As anyone who has corresponded with him will know, he has a natural intelligence outside of the ring, just as he does within it.

Take his opinion on the recent changes to TNA’s time slot, for instance. 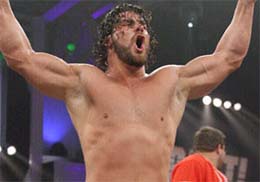 “When they told us about that (the time slot change), we weren’t sure if it was good news or bad news,” he told SLAM! Wrestling. “But now it seems like good news. There’s an expectation that ratings will improve, simply because Thursday night is the most watched night of television. I guess Spike TV thinks we’re a good anchor on that night. Instead of going head-to-head with shows like CSI which gets a 23 or 25 rating every night, putting us on at 11 p.m. will give both us and Spike a better rating.”

Thoughtful words, especially so from a man with the tough-guy ring persona of “The Canadian Enforcer.” He was speaking to SLAM! Wrestling prior to his Twin Wrestling Entertainment (TWE) bout with Samoa Joe on March 16th, a match in which he eventually tapped out to “The Samoan Submission Machine,” losing the TWE Championship. However, it is clear that this loss will not affect his wrestling goals, as Roode approaches the sport of professional wrestling as any true competitor would.

“It’s like if you’re in the NHL, you want to be the best,” he declared. “I’ve been doing this for eight years, and always wanted to be a champion. I got that chance with the NWA World Tag Team Championship (on two occasions). But there’s always that part of wrestling where winning the NWA heavyweight title, in singles competition, is the goal. If the opportunity comes my way, I’m going to take the ball and run with it.”

Despite these dreams of singles glory, Roode is currently embroiled in a tag team feud -– alongside his partner Team Canada “Showtime” Eric Young -– with The Naturals (Chase Stevens and Andy Douglas), whom they defeated at March’s Destination X pay-per-view. Like many Canadian wrestlers, Roode is particularly proud of his roots. “You can relate it to a hockey player who gets to go overseas and represent his country in the Olympics or the World Junior Championships. It’s exciting for me to be one of the representatives of Canada in TNA.”

Although TNA is now branching out into the house show market, recently in Detroit and upcoming in Virginia, Roode also confided in SLAM! Wrestling that he enjoys wrestling on independent shows. “It gives me the opportunity to go back and do some of the stuff that got me to TNA,” he said. “Sometimes in a big company, you’re limited in what you’re able to do in the ring. You’re given certain time limits, or they have to get certain stories advanced on TV. So to go out there and have a chance to perform for the people and do the things you want to do. It’s a lot of fun.”

More than just having fun though, Roode furthermore realizes that the success of independent shows can only be good for a business the WWE holds in the proverbial guillotine choke. “The business as a whole has been really hurt over the past couple of years, but Twin Wrestling here tonight had a good turnout, and Blood, Sweat and Ears (in Mississauga, Ontario) always do too. Those are the kind of promotions that go out and try to give the people what they want every month. With people like Samoa Joe coming in tonight, and Christopher Daniels who came to Toronto recently, it helps build that interest (in other promotions).”

With his understanding of the business, natural ability in the ring, and work-ethic of a sportsman at his peak, it may not then be long before Bobby Roode does in fact edge himself into the NWA Heavyweight Title scene. Indeed, with the young, dynamic Christian Cage the current champion, Total Non-Stop Action could do much worse than consider the similarly-sized Roode for a championship match.

For now though, business must be finished with The Naturals. After that, a championship –- be it in singles or tag team action –- must be a target. Both Christian and the team of America’s Most Wanted, should beware.

— with files from “Bloodthirsty” Bob Kapur