After 26 years as a pro wrestler, Maria “The Tigeress” Bernardi will be remembered as a secretary. Not just any secretary, however. She was the glue that held the Cauliflower Alley Club together for 35+ years. Her death yesterday closes the book on the club’s original members.

Bernardi retired from the wrestling wars to care for an ill sister in Los Angeles. Fortunately, she found that there were some other wrestling alumni around. 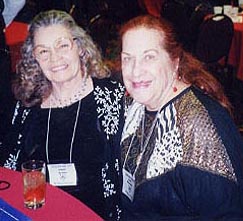 Ehtel Brown and Maria Bernardi in 2001 at the Cauliflower Alley Club banquet in Las Vegas. -photo by Rose Diamond

“Having retired from the ring, I can recall in the early ’60s reading a column in the Hollywood Independent newspaper mentioning Cauliflower Alley Club meetings being held at Mike Mazurki’s restaurant, the Baron Castle near downtown Los Angeles,” Bernardi recalled in a Cauliflower Alley Club (CAC) newsletter. “I contacted Mike, who encouraged me to attend the Wednesday luncheons, and was designated as club secretary.”

Bernadi, and treasurer Arthur Abrams, were key to the CAC’s growth, while Mazurki was the club’s public face. She was Member #3.

“As secretary during this time period, the experiences have been many. I initiated the Lifetime Membership drive, a program that is still a part of the club today,” Bernadi wrote.

In an interview in mid-February, Bernardi recalled the struggle to become the first woman honoured by the CAC in 1985. “I insisted on it. I kept asking them and asking them. They said later, later, later. I said, ‘Later my ass, let’s do it now.’ ‘Well, it’ll shut her up, so let’s do it.'” Recognizing the contributions of women wrestlers has been a regular part of CAC events ever since.

The daughter of wrestler Nick Bernardi, Maria was born June 3, 1925 in Culver City, California (a part of the Los Angeles area). Though her father wasn’t big enough to really succeed on more than a local basis, Maria had big plans.

“All my life I dreamed of being a wrestler,” she recalled. “My dad would take me to workouts to get me out of my mother’s hair when I was three years old. I knew then that’s what I wanted to do. I thought he was playing.”

Maria would get in the ring with him and insist that he play with her. To quiet her down, he would. “The more he bounced me around the more I liked it.”

The oldest of 10 kids, Maria resented having to do chores and look after her younger siblings. She wanted out, and ger godfather, George Romanoff, and her father took her to Jacksonville, Florida to start her wrestling career when she was only 13 because she couldn’t get a license in California. Once she landed her first license in the state of Florida, it was easy for Bernardi to become licensed in other states.

At 5-foot-5, and 140 pounds, Maria Bernardi was good right from the start. “It felt like the thing I was born to do.”

Bernardi worked the “ballet” (or carnivals), wrestling men and women. These were mainly slugfests, and if Bernardi could be beaten the victor was awarded $25. Contemporaries Clara Mortinsen and Rita Martinez worked these challenges along with her in the mid to late 1950s.

In Mexico, Don Sebastian dubbed her The Tigress. And though Maria didn’t like the style in Mexico, she found success there as a wrestler.

Bernardi wrestled for outlaw promoter D.W. Van Vleet, who ran shows with his wife Violet Ray as the top star. Bernardi worked the South, Midwest, Alaska and Canada. Van Vleet called her “Maria Garibaldi” because he said he could not remember the name “Bernardi.”

She worked for Van Vleet for a number of years, then decided it would be more advantageous for her to work as an independent contractor. “When I was working for Van Vleet, $50 per match was average pay for the girls. On my own, I was making $300 to $500 per match, and I always demanded trans, hotel, food.”

In 1948, Bernardi won the Italian Lightweight Women’s title in a match in Rome that allegedly lasted one hour, 56 minutes. In 1952 Clara Mortinsen retired as World Lightweight Women’s champion, and this led to a tournament that saw Bernardi emerge as the new title holder. Bernardi would successfully defend this championship until her retirement in 1963.

When her baby sister got into trouble, and needed to be looked after, Maria quit the nomadic lifestyle to settle down in Los Angeles and look after her. Bernardi tended bar, waited tables, cooked — “Whatever I had to do.”

For the last number of years, Bernardi suffered many health issues. On Thursday, March 9th, she suffered a cerebral hemorrhage and entered into a coma at Cedar Sinai Hospital in Los Angeles. She died at Cedar Sinai about 5:30 p.m. PT on Monday, March 20. She was removed from her ventilator and lived about another hour.

Even though she had been in poor health and forced to relinquish the reigns of the CAC, Bernardi still kept a hand in the club and was an active member of the board of directors. In the full spirit of the CAC’s “Ring of Friendship,” she frequently arranged get-togethers of local club members at the Sportsman’s Lodge in Studio City, Calif., where the CAC held its award banquets for several years. Bernardi was adamant about keeping the events private (just as they had been for over three decades), and if any fans stumbled in with a glimmer of recognition in their eyes, Maria would scream, “Wrestlers only!” One warning in that trademark gravel voice was more than enough to shoo off anybody.

Her collection of wrestling memorabilia was willed to the Cauliflower Alley Club.

— with files from Kurt Nielsen