High on a wrestling return to school

Many people dream of visiting their old high school after having made it big in their chosen profession, perhaps as a doctor, lawyer or engineer. Few return to the former alma mater as a pro wrestler. Three Ottawa-based wrestlers — Misty Haven, “Mr. Know-It-All” Shawn Demers and “MVP” Michael Von Payton — were recently able to achieve this unique goal. 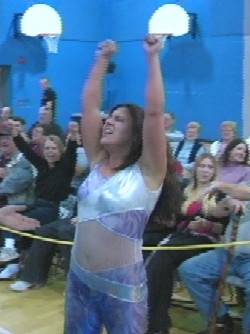 Demers and the married couple of Misty and MVP worked a show held at the Rockland Ontario District High School, east of Ottawa. The event, held on January 13, was a fundraiser for the local high school rugby team known as the RDHS Wildcat Rugby Club.

Von Payton (Michael Leduc) explained how the wrestling promotion Rage Wrestling became involved with the rugby team. “I met Mr. Ray Jones (former vice principal and rugby team tour manager) and mentioned doing a show to help them raise funds. He liked the idea and we went from there. I never did play rugby, which I now regret. Maybe my regret of not playing is what makes me want to help out so much!”

There was a very distinct community feel that is not present at many wrestling shows. Before the event, Misty Haven (nee Stephanie Landry) helped high school girls prepare posters promoting the matches. The ring was set up by the wrestlers and members of the rugby team. Shawn Demers had a friendly chat with a number of the students.

The first match of the evening featured Demers — a hometown favorite despite his Mr. Know-it-All attitude — against Zack “The Freak” Manson. Many of the high school girls seemed very impressed with Mr. Know-it-All’s sequined outfit and embroidered wrestling shorts. After a tough battle, Mr Know-it-All emerged victorious against Manson. 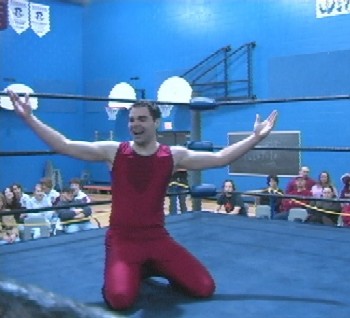 Demers said many of his former teachers did not recognize him in the ring. “I was quite shy in high school. When I take on the character of Mr Know-it-All and enter the ring. I become a different person.”

The second match featured Rockland-native Misty Haven against Portia Perez. It was obvious that Misty had much more experience and made quick work of Perez. Misty’s mom still lives in Rockland and had the chance to see her daughter perform.

The highlight of the night was a lumberjack title match between crowd favorite and alumni Michael Von Payton against the heel Drake Styles. The high school rugby team served as the lumberjacks for the match. It was great entertainment seeing the teenagers exuberantly throwing Styles back into the ring and then gingerly nudging MVP back into the action. The match featured a number of high-flying aerial moves and close two-and-a-half counts with Von Payton finally victorious. After the match, it seemed like MVP was related to half the crowd, receiving congratulations from high school girls to grandmothers. 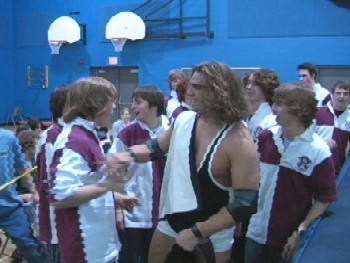 Rockland High School teacher and rugby coach Andrew Lawford was happy with the event. “This will help send our guys to Wales and England. It was great for Rage Wrestling to help us out.”