I made the mistake of opening the posthumously released Cheating Death, Stealing Life: The Eddie Guerrero Story about an hour before I intended to go to sleep. Two hours later I packed it away for the night, and by the next evening I had finished the book. Since then I have tried to figure out exactly how to put my thoughts to paper in review of the book. It hasn’t been easy. 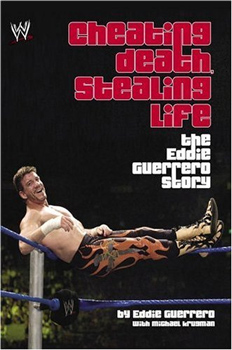 The difficulty lies in trying to balance my obligations as a reviewer with being a huge fan of Guerrero’s, as well as being human and still feeling the loss of one of my favorites. The book is well written and should be a great story about a man overcoming his demons and triumphing. That’s what the life story of Guerrero is supposed to be. Unfortunately, his death on November 13, 2005 still lingers in the back of your mind.

You can’t help but get chills when Guerrero talks about people like Brian Pillman and Curt Hennig and how they were taken to soon. His stories about how the early death of partner Art Barr affected him also ring morbidly. Both men were so talented and taken far too soon. When Guerrero talks frankly about almost dying in a car crash and of drug abuse and how thrilled he is to be alive, it will bring you to tears.

What makes the book so difficult to read and review is these moments, of which there are many, that take you on a roller coaster ride of emotions. It is also kind of creepy reading Guerrero’s own words and hearing his voice in your head knowing that the book was released after his death. At least in this case however the book was already planned to go to press, instead of exploiting Guerrero’s death like WWE is doing on TV every week.

Once you get past the sense of loss that the book brings about, Cheating Life, Stealing Death is an interesting story about Guerrero’s life. His relationships with his brothers, including the distance between Chavo, and living up to the pressure of being his fathers son is covered. It’s always interesting to read about the history of the business, and how Guerrero’s family lived off of wrestling. Breaking in the business in Mexico and his rise through Japan, ECW and WCW are covered — although not as in depth as one would have liked.That is the flaw with this, and most WWE biographies. The slant always seems to be that WCW was a horrible, horrible place, which, while has some accuracy to it, could also be said about WWE in some of its incarnations over the years. On the other hand, Vince McMahon is apparently a genius that can do no wrong. One can’t help but wonder if Guerrero would feel the same way watching WWE use his legacy and death so cheaply on TV. I find myself wondering if wrestlers release biographies once they leave WWE if the outlook would be so rosy.

Guerrero’s biography is worth reading. The proceeds are going to his family, which gives that much more motivation to purchase a copy. Had Guerrero not died then under better circumstances his biography would be a very good wrestling book.

But, as we discover reading the book, life doesn’t always go the way you hope or want it too. Guerrero’s life story teaches a lot of lessons about the toll of the business on family and your body, something anyone thinking of breaking into the business should look at.

At times comedic, at times tragic, you won’t finish reading Cheating Life, Stealing Death: The Eddie Guerrero Story without taking something away from it. What it is depends on the reader.