Anyone who has become a fan and regular watcher of Ring Of Honor knows what CM Punk’s contributions meant to the company. Through thick and thin, Punk was an ROH man and made his allegiances clear, while having great match after great match. At ROH’s Death Before Dishonor 3 that all changed, leading to a series of shows that are as compelling for their main storyline as for the matches themselves.

The seven-DVD series from Ring Of Honor starts with Death Before Dishonor as the first of Punk’s “Final night with the company” before heading to WWE. Punk challenged ROH Champ Austin Aries and at the end of the stellar match won the company’s World Title. It was then that things changed, as Punk cut a scathing and brilliant promo on ROH and its fans before threatening to walk out of the company to WWE with the belt. 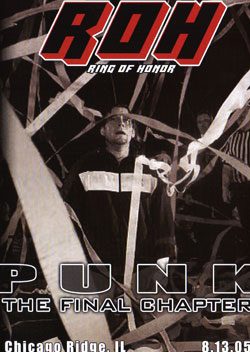 The next six shows had fans literally screaming for Punk’s head — the legitimate hatred and emotion comes screaming through even in DVD form as Punk disrespects the ROH title by signing his WWE contract on it and playing a cowardly heel in title defenses against Jay Lethal (Sign of Dishonor), Roderick Strong (Escape from New York), James Gibson (Fate of an Angel) and Christopher Daniels (The Homecoming). It all culminates in Punk’s final title defense at Redemption in Dayton, Ohio where Punk faces three of ROH’s best — Samoa Joe, Daniels and Gibson. The resulting match is fantastic, as expected with such a high caliber of talent, and the closing of the show induces goosebumps.

It is a credit to booker Gabe Sapolsky and his wrestlers that the series and angle works so well. Punk takes to his heel run with relish and even as a fan, you hate him. The passion the promotion, fans and wrestlers have over the disrespecting of the ROH title makes it obvious how important that belt is — something that has been lost in other promotions. The creative departments and booking teams of other companies could learn a few things from how to execute an emotional angle from watching these DVD’s.

It is a different emotion however on the final DVD in this set. Punk: The Final Chapter sees Punk return to his hometown of Chicago, Illinois to face his best friend and fellow Chicagoan Colt Cabana. Gone is cocky heel Punk on this night, replaced with one who walks through the curtain with tears streaming down his face. Whether you consider yourself a big CM Punk Fan or not, you will get choked up at this farewell to a man who helped create the company as it is today.

Aside from the Punk saga, the DVD’s have a number of other things to attract fans. “Fate of An Angel,” “Retribution” and “Punk: The Final Chapter” features Matt Hardy’s three ROH appearances. His matches against Christopher Daniels, Homicide and Roderick Strong show that Hardy can go with the up and comers in the business and what could have been had he not returned to WWE and their style. The matches are all quite good, and it is interesting watching the crowd dynamic as the first match against Daniels they cheer him, but when it became evident he would be going back to WWE after the next two matches, many in the crowd relentlessly turn on him. The WWE style finishes of two of the matches also hurt what was otherwise a good, albeit brief run for Hardy in ROH.

I could continue to extol the virtues of this DVD set for quite awhile, but the fact of the matter is you should just get the DVDs for yourself and see. If the Punk angle and Hardy matches aren’t enough to convince you, then mention great matches like Jimmy Rave vs. AJ Styles (twice) Samoa Joe vs. James Gibson vs. Homicide vs. Austin Aries, AJ Styles vs. Roderick Strong and The Embassy vs. Generation Next should whet your appetite. That’s just a sample of what is on the DVDs that makes them so good.

If you are tired of what is on your TV and looking for an alternative, ROH is a good place to start. The seven DVDs reviewed here are just a sample of the great product they are offering, as the company continues to put on must-see releases on a regular basis. For Punk fans this is a must have. For the casual fan, it’s a great look at why so many people are passionate about Ring of Honor.