Sting ready for one more run

When your the end of your career does not come on your own terms, you make a comeback. It’s an unwritten rule in other sports, and it is what Sting is going to do as he returns to the ring at this Sunday’s TNA Final Resolution pay-per-view.

“It’s now or never,” Sting admitted during a recent phone conference with the wrestling press.

Recently Sting signed a one-year contract with TNA. The contract will require Sting to work a “full-time” job, according to Sting. 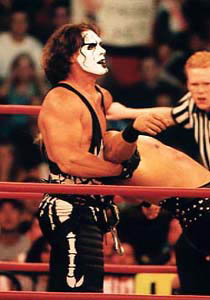 In a full-time role, Sting was last on the national level in 2001, when World Championship Wrestling was bought by the WWE. After his WCW/Time Warner/AOL contract expired in March 2002, Sting was not completely away from pro wrestling. He was a major part of the World Wrestling All-Stars tour in Europe in 2002-03, then made occasional appearances in TNA, teaming with Jeff Jarrett in June 2003, then wrestling him in November 2003. Most of 2004 was taken up with his movie, Sting: Moment of Truth, and his book of the same name.

The WWE deal over WCW left an unsettled feeling with Sting, who believes this year would had been his last chance to leave on his own terms.

“I am not getting any younger, but I feel I have a lot left,” Sting said.

Sting (real name Steve Borden) turns 47 in March, but says he has been going back to the gym and feels ready to return.

“The schedule is much easier than it was with the WCW or it would be with WWE. That was one of the main reasons why I chose TNA over an alternative,” he said.

It was Jerry Jarrett who gave Sting his first break in wrestling in the mid-1980s. Sting has always thanked him for the opportunity, and it was Jerry and his son Jeff that convinced Sting to return to wrestling.

Sting made sure it was okay with his family, though. Sting looked at the schedule and discussed it with his children and wife. Two of Sting’s children are in their teens, and while he has a younger girl, the schedule would only require him to be on the road for about five days a month.

“My boys are excited. They have been talking to friends at school,” Sting said. “My daughter is only five, but I think the light schedule will be okay for the family.”

Sting admits he has nothing else to prove in the ring. He looks at this chance to help elevate younger talent, singling out potential matches with Abyss and Samoa Joe. “I always liked my battles with bigger men. I liked matches with Big Show and Vader, and I look forward to similar battles with some of TNA’s bigger men,” he said.

But Sting might find that hard to do. TNA’s roster consists of a lot of smaller, cruiser-style wrestlers. This style might contrast with Sting’s traditional style.

“The action is second to none,” Sting said of the style in TNA. “I look forward to seeing how I fit in.”

The folks at TNA are thrilled that Sting has joined the team. “As far as this Sunday goes, I think the anticipation is as high as any we’ve had for a pay per view. From listening to people and reading the internet, you can just feel the anticipation. I think the expectations for this pay per view are higher, and he’s the reason why,” said announcer Don West. “Sting brings star power. He’s the one person that was in WCW that never went over to the WWE. He’s never been one of Vince’s guys. He’s kind of been the free agent that everyone wondered what would happen with; and boom, we’re getting him. He looks great, he’s been working out. I’m fired up because Sting is as big as name out there I think you can get that no one else has.”

Sting admits to TNA being far behind the popularity of the WWE. When asked what he thought could help, he quipped, “A new time slot.”

He has plans to propose a new time slot to the executives of Spike TV, which current airs TNA’s Impact weekly show late Saturday night. He said the only way for TNA to grow anymore would be to a get Monday night timeslot going head-to-head with WWE’s RAW show.

It’s no secret TNA has been asking for a Monday night timeslot since initially negotiating with Spike TV. Maybe Sting is the name they need to show Spike TV that they can compete with the WWE in terms of name power.

Sting’s return to the ring will be his first match in a year. He will team with Christian Cage to take on Jeff Jarrett and Monty Brown.

He does not see his time off as being a problem. “I might have a little ring rust, but I am excited to get in there.”

– with files from Ryan Nation