Of course, I knew of his father and his brother. 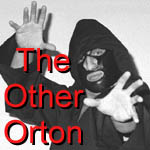 His nephew, Randy, was the first big name I ever interviewed. But all I knew of Barry Orton could be summed up in one word: scandal.

After a chance meeting in Las Vegas, I was given the opportunity to delve headfirst into the enigma, the abyss that is Barry Orton.

I was heading to the Cauliflower Alley Club (CAC) Reunion for the first time. I had just finished journalism school and heading to Las Vegas seemed like the ultimate reward for obtaining my degree.

A few days before boarding the plane, my grandmother read my cards. An eccentric practice to some, but it was a routine within our relationship whenever we saw each other. She told me that the Vegas trip was going to change my life in ways I was not expecting, ways I was not prepared for. If she only knew…

It was the last day of the CAC Reunion and I remember desperately trying to keep my composure the entire time. It was so difficult not to be overwhelmed when one moment you would turn and be face to face with someone like Harley Race and the next moment you’d walk by Walter “Killer” Kowalski eagerly regarding the youth, knowing all too well their motivations and visions of wrestling rings dancing in their heads, participating in the training sessions run by Les Thatcher. 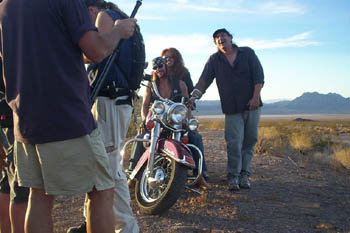 Barry (right) on location for Tweak the Heat.

Sin City itself had been a surreal experience for me. My entire being was buzzing from all the lights, sounds and the cheap margaritas.I often visited the exhibition room to calm down. Amongst all the merchandise for sale and wrestling displays, I caught up with my mentor, good friend and fellow Canadian, Bob Leonard. As he was introducing me to female wrestling legend Penny Banner, I noticed a guy with a video camera interacting with a few of the wrestlers. Bob pointed at him and told me that his name was Barry Orton (actually Randal Berry Orton). Barry came by where we were standing and started filming Penny, explaining that he was making a documentary. After I introduced myself, he told me that he and a few of the wrestlers were getting together the next day and he invited me along.

It was an offer I couldn’t refuse.

“Ox Baker, your limo is here!” Barry yells out his driver’s side window. We’re outside the Circus Circus hotel. With the addition of Ox Baker and his wife, Peggy Ann, there are now seven of us crammed into Barry’s van. It has to be a sight even to the people of Nevada. The booming Baker in the passenger seat; the dignified Sir Oliver Humperdink behind him; K-9 Kohl, a manager from Tennessee, dressed all in black is next; then there’s Bob Johnson, a current consultant/booker with Stampede wrestling; Peggy Ann and me, crammed in the back with my little notebook thinking no where in any of my journalism textbooks did it mention I would find myself in a situation like this. 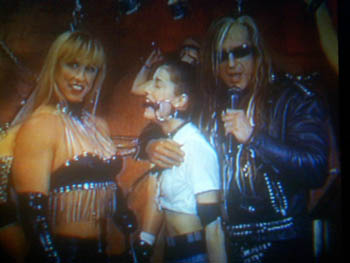 We head to Barry’s house which he shares with his mother and his sister, Rhonda. The awe and bewilderment were still fresh in my eyes because Barry leans in and offers, “Relax, they’re people just like you.”Feeling slightly, just slightly, more at ease, we all gather in Barry’s home edit suite and watch some promos from his days at World Organized Wrestling (WOW). The tape is from the early ’90s and has Barry portraying an S & M character. During one of Barry’s matches, a familiar face acts as referee. It’s his nephew and current WWE superstar, Randy Orton. Barry relays to the group how it was one of Randy’s first times in the ring. The wrestling speak soon unfolds in full force. There’s an old saying about wanting to be a fly on a wall in particular situations. For this afternoon, I was granted that privilege.

I sat there amongst the boys as they gave their best Stu Hart imitations with deepest respect and fondness. Then the “biz” talk started. It began with a talk about gimmicks. A subject, I soon learned, that Barry is extremely passionate about.

Barry revealed that in his own Stampede days when he was the Zodiac, a tribute to the character first portrayed by his father in the ’70s in the Florida territory. The character originally came on the heels of the Zodiac Killer out in California. Barry would read all the astrology books he could get his hands on to make the character authentic.

“The gimmick has to come from the heart,” Barry declared.Humperdink nodded and piped in, “A gimmick won’t work if you tell someone how to be.”

After discussing some of their ideas for improvements and storyline suggestions for the WWE, including Baker offering to portray Linda McMahon’s gigolo (don’t ask), it’s on to relishing the days of yore. Days before the higher flying moves, the riskier techniques of today.

Someone remarks that almost everyone is doing a power slam now. 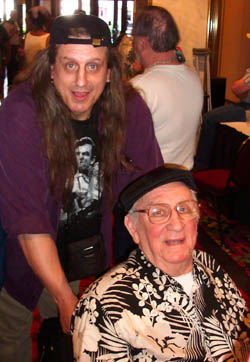 Baker joins in the reminiscing by commenting, “I remember when Jake Roberts’ DDT looked like it tore the guys’ head off.”

Then the gentle giant just shakes his own head.

The somber tone breaks when it is announced that lunch is ready. The forced normalcy continues and I giggle to myself thinking I just passed Sir Oliver Humperdink potato salad.

After eating, we assemble in the living room for the main event. It seems Barry has been using his creative energies outside of wrestling. He has been teaching acting classes for a few years now, enforcing a strict, organic and no nonsense style. His current project is a film called, Tweak the Heat.He shows us a few clips of the film that has him involved in the directing, executive producing and even co-writing along with his friend Zoë Wild. He tells us it’s about “a phenomenally intelligent New England girl” who is confronted by several obstacles in life, namely crystal meth. Something I later learn, Barry himself knows all too well.

Barry is beaming and his guests are impressed and proud of him.

At the end of the day Barry and I exchange contact information. He promises a personal interview. We hug and I thank him for his hospitality. I fly back home to Regina, Saskatchewan wondering if I’ll ever hear from him again.

“I was a central figure in one of the largest and most infamous scandals in the history of professional wrestling and I am ready to break my decade long silence, tell my side as it were. Through my eyes and with absolute responsibility and devoid of animosities. It is time.”

His words were glaring at me.

Several emotions ran through my brain.Panic.

I quietly cursed my grandmother’s prediction.