They don’t come much tougher than Larry “The Axe” Hennig. Yet, when he learned of his induction into the George Tragos/Lou Thesz Professional Wrestling Hall of Fame, his eyes teared up. Not that he would say such a thing.

Instead, it was his wife of 50 years, Irene, who told SLAM! Wrestling that “The Axe” was more like his old “Pretty Boy” persona when he was told of the honor in July by Mike Chapman, executive director of Iowa’s International Wrestling Institute and Museum.

“We were down in Newton, Iowa. It was a very, very hot day. From the hotel we were staying, we could walk over to the museum. So instead of walking around to the front door, we were going to take a shortcut through the basement,” recalled Irene Hennig. “That’s where we ran into Mike Chapman. He said, ‘Can I talk to you a minute?’ … He took us aside and he looked me in the face, and he said ‘Irene, I just want you to know that you’re standing next to next year’s Hall of Famer. Of course, I looked at Larry, and I put my hands to my face. My eyes welled up, and his welled up. It was just awesome. We were just overcome with happiness.”

Like a true championship tag team partner, Larry also said the honor in the plural — “We’re thrilled. We’re overwhelmed” — a credit to his wife.

Besides the support of his “Battle-Axe” Irene (as Bobby Heenan dubbed Irene Hennig in his autobiography), how did Hennig get to this point? After all, he’s entering the Hall of Fame with a pretty well-regarded Class of 2006: Dory Funk Sr., Bret Hart, Mike DiBiase, Tom Jenkins and Bob Roop.

A 1954 high school state champion in Robbinsdale, Minnesota, Hennig accepted a scholarship to the University of Minnesota to wrestle and play football. However, real-life would interfere.

“I was married when I was 19,” Hennig said. “The red, white and blue, the college, I had to bypass that. I went a year and a half there to college on my scholarship, but I just couldn’t maintain it because we had a young family started. We had to do it the old-fashioned way and get a job.”

The Hennigs started Larry Hennig Realty & Auction Co. Inc., a company that survived the wrestling years and is still going strong. But Larry also learned the pro-business under Joe Pazandak and entered Verne Gagne’s AWA promotion for further schooling. He was a quick study, and after refereeing and prelims, he would become a tag team specialist, winning the AWA tag titles with Duke Hoffman (Bob Leipler) and then, teaming with “Handsome” Harley Race, taking the belts four times.

Hennig and Race had met in Texas. “Harley came in here as just a young kid to Minnesota. Harley’s about seven or eight years younger than I am,” said Hennig. “Harley came to Minnesota and wrestled on TV. They just threw us in one day together and all of a sudden, it was unbelievable. We were a good team because we didn’t do the same things. I was more surface transportation and he was more air express. It worked out real good for us.” 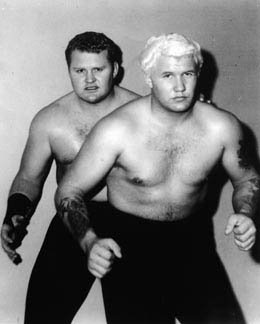 In The Pro Wrestling Hall of Fame: The Tag Teams, Race talked about the team, ranked in the Top 20 of all time. “If you go in there with the attitude of being a team, and leaving your ego and all that stuff out of the ring, you can become a hell of a team, and I think Larry and I were one of the better ones … Had he not gotten hurt, who knows?” Race speculated. “We might have stayed together.”

Ah yes, the injury. Hennig’s blown knee was one of the more famous in-ring incidents in wrestling history.

In his autobiography, King of the Ring, Race described the match in Winnipeg in 1967: “During a match on November 1, Larry was lifting his opponent, a 260-pound John Powers, when another wrestler bounced off the referee and into Larry’s legs, bending them inward. As Hennig lowered Powers, one of his knees bent the wrong way at nearly a 90-degree angle, tearing the cartilage and tendons in his leg. As I watched, I knew in an instant that our on-again, off-again two-year title run was off again. It would be the last time we would own the title.”

Race’s description only scratches the surface, though. Hennig said that he didn’t want to go to the hospital in Winnipeg, and rode in the back of the car with Harley driving all the way back home. “I gutted that thing out. It’s a 500-mile trip back to Minneapolis,” said Hennig. “The next morning, the doctor put me in the hospital, ready for surgery. That was on a Friday. Saturday they had the Amphitheater running in Chicago and Verne came to the hospital and said, ‘Larry, you’ve got to do me a favor. You’ve got to go to Chicago. You’ve got to make an appearance there. We’ve got to do something with the belts.'”

Business was going well, so Hennig agreed and was taken to a plane in a wheelchair to go to Chicago. At the arena, he was suited up — his leg was taped, he was given crutches and he leaned on Harley on the way to the ring. “They got me up on the apron and boom, boom, boom, the whole deal anyway. We lost the title there.”

Hennig turned around and went back to Minneapolis for the surgery. “I got back to the hospital at one o’clock in the morning, and they couldn’t operate on Sunday so they operated on Monday. Verne made the payoff … and he gave me $50 more than he gave me the week before.”

The poor payoff is just one of The Axe’s beefs with Gagne. But he acknowledges it demonstrates his toughness. “Who [else] would do that? Ride all night in a car, go to a hospital, they put me in there and prepped me for surgery. Guy said, ‘Where you going?’ I said, ‘I’m going to Chicago to wrestle.’ I told the guy in the bed next to me. Of course, they thought that was a big joke.”

Hennig took 18 months off to heal, and the knee still bothers him today. (At the 2005 Cauliflower Alley Club banquet, Hennig led a prayer: “Oh Lord, oh Lord, send us down a good knee doctor.”)

After coming back to wrestling, he worked a little differently as a singles wrestler, morphing into “The Axe.” On numerous occasions, he would head east to New York’s WWWF to challenge for Bruno Sammartino’s world title.

As his career in the ring wound down in the 1980s, Hennig’s son, Curt, was beginning to wrestle. It was among his favorite memories, teaming with his son, even winning the Pacific Northwest tag titles together in 1982. Larry Hennig retired from wrestling in 1985, but unlike many of his peers, he had something to fall back on — his real estate business.

“It was hard to balance, but it was certainly worth it now,” said Hennig. “With the exposure that I had through wrestling, it’s still opening doors for me in Minnesota. It turned out to be a two-bladed sword for me. It worked then, and it’s still working now.”

Being well-known in the area only gets one so far, he said. “It’s a foot in the door. … I always had my own company, I’ve always been a broker, I’ve never been an agent. … After you get your foot in the door, you’ve got to perform. When you take on a client, you’re representing them and if you’ve got a seller, you’re representing them. You’ve got to get the job done in order to be successful. If you’re not selling and delivering sales and getting a good reputation, it doesn’t work.”

So we’re back to his reputation, a big part of the reason he is joining other legends like Race, Frank Gotch, and George Hackenschmidt without major amateur credentials in the George Tragos/Lou Thesz Professional Wrestling Hall of Fame.

“I could hold my own with anybody, I really felt that, because I had the basic knowledge, and the stuff I picked up from guys like Lou Thesz and Joe Pazandak, some of the old hookers. I didn’t have to take the backseat to nobody,” said Hennig. “Win, lose or draw, if they wanted to f*** with me, they knew they were going to have a problem. Make it simple. There were 10 tough guys in the world, and I get nine Christmas cards every year.”

The Hall of Fame induction makes up for a lot of the pain and sacrifices. “It’s magnificent and I’m overwhelmed. I’m delighted, and it’s the best thing that could happen after all these years, these hills and valleys — I lost my son, my leg, my limbs. The travelling and the hard times. I kept my nose to the grindstone, and at the same time, kept a good public image through my business. So when I went out on top, I didn’t come back and end up in the bars. I don’t drink and I don’t smoke, and I kept myself in pretty good shape.”