So, you wanna be a wrestler?

Visit any bookstore of repute and you’ll find the shelves brimming with “how-to” manuals for any area of athletic endeavor — whether it’s baseball, basketball, golf, skateboarding, or curling. 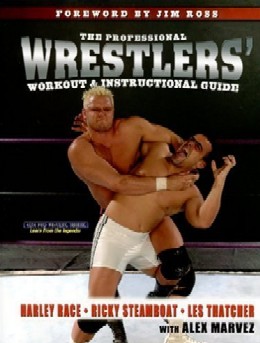 But professional wrestling, because of its closely held trade secrets and unique insider lingo, hasn’t received the same treatment. That’s why a new training manual written by some of the most respected names in the sport is attracting attention among wrestling hopefuls.

The Professional Wrestlers’ Workout and Instructional Guide is a step-by step introduction to the rigors of training, holds, ring psychology, and just about every aspect of the mat game that the authors could tackle in 129 oversized pages.

“Ten or 15 years ago, I wouldn’t have even tried something like this,” Thatcher said during an interlude at a recent three-day training camp in rural Spindale, N.C. “I would have said, ‘Are you crazy? Are you trying to get me drummed out of the corps?’ But the business today is so wide open.”

Since it’s now acceptable — and even fashionable — to take a peek behind the curtain and see how wrestling operates, Thatcher, who has been a wrestler, TV commentator and producer, and trainer for 45 years, wants to make ensure that it’s done the right way.

“The biographies and the autobiographies are obviously pointed to the fan. But doing the camps with Harley and Ricky, we saw the needs of those guys,” he said, pointing to the fledgling trainees at the North Carolina camp.For non-wrestlers, the book works well as a viewers’ guide, Thatcher said. It depicts holds and discusses ring psychology in a way that can enlighten even grizzled observers.

“If you’re a big football fan, once you understand the formations and a little bit about the game, you enjoy it more. If you’re a very serious wrestling fan, I think it can make you more aware of what you’re watching or what you want to see, or maybe what you aren’t seeing.”

Still, the biggest benefit will accrue to would-be grapplers. The camp at Spindale, Thatcher noted, was similar to others he has run — full of well-intentioned and inexperienced wrestlers whose knowledge of the sport is defined by the glitz they see on TV.

“The book is aimed at obviously independent wrestlers from entry-level to guys with five, six, seven years of experience. Working these clinics, I don’t think there’s a limit to what you can learn because a lot of these kids don’t have a foundation of the basics. They start with high spots and work backwards.”

Sections in the book include advice on selecting a trainer, training and conditioning, maneuvering in the ring, and breaking into the business. Interspersed are some practical tips from the three wrestlers-authors, and a few pieces of sage advice, including an admonition not to put 180-proof alcohol in your mouth. 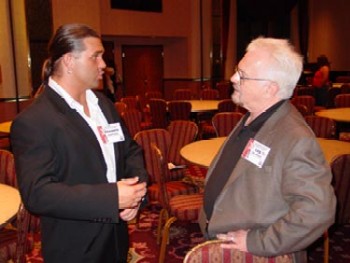 That suggestion came courtesy of Steamboat, now with the WWE, who routinely roused crowds by setting a torch ablaze when he entered the ring. Normally, Steamboat kept kerosene in his mouth as a handy fire-starter. But he once substituted “white lightning” as his fuel when he ran out of kerosene.”By the time I climbed the top rope, the white lightning had burned the inside of my mouth like when you bite a pizza that’s too hot,” he wrote.

Thatcher, who has trained with Cincinnati bodybuilding guru John Parillo, also has a healthy dose of diet and nutrition advice. And Race’s comments about performance-enhancing drugs are a lesson to any aspiring wrestler.

“I went on a six-week cycle of steroids,” the Hall of Fame champion Race said. “At the end of that six weeks, I said, ‘Who the hell cares what I look like? This is not for me. My joints are hurting.’ I got away from it.”

Thatcher, Race, and Steamboat also devote some thought to ring psychology and gimmicks, saying young wrestlers have to let their personalities shine through their characters, instead of cribbing off someone else’s identity.

As the authors wrote, “When Steve Austin got hot in the WWE, the independent circuit was filled with kids who shaved their heads, grew goatees, got leather vests and ran around flipping people off. The only reason the gimmick works for him is that it is him. It doesn’t work for anybody else and mimicking him gets you branded as a cheap rip-off both in and out of the locker room.”

Thatcher emphasized that point to his students at the Spindale camp, where he was joined by former WWE trainer Dr. Tom Pritchard, who has ably replaced Steamboat in the Elite Pro Wrestling lineup.

The book comes with an important caution — don’t attempt anything without the guidance of a qualified trainer, several of whom are listed in the volume. In other words, this is serious stuff, not fodder for some staged living room match.

“I don’t care if you read this book 50 times cover to cover. If you haven’t put in hundreds of hours with a competent trainer, it doesn’t matter,” Thatcher said. “It’s like you and I were sitting down and reading a book on brain surgery. It doesn’t make us a brain surgeon.”Thatcher admitted that seeing his name in print gave him as much of a rush as walking into an arena to thousands of cheering fans during his salad days in the Mid-Atlantic territory.

During a recent trip to a Cincinnati-area mall, he spied a bookstore and quickly left his wife, Alice, in his wake. “She said, ‘What book are you looking for?’ I said, ‘Mine. I want to see it on a shelf.’

“After 45 years and all the dreams I’ve had in this business, and a lot of them fulfilled, I never considered myself an author. But just to walk in, and there it is, and my name is on it … ‘OK,’ I said, ‘I’m not going to buy anything. I just wanted to see it. Now, I can go home happy.'”