STATEN ISLAND, NY — Lucky Fortunes Restaurant may not be as lavish or famous as The Four Seasons, but that didn’t stop them from cooking up a dinner worth a million dollars. 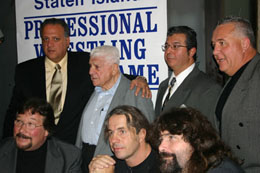 Event coordinator John Pantozzi was very pleased with the outcome and how smoothly things ran. “If I had to rate this dinner on a scale of one to ten with ten being the highest, I would rate it a ten. As I said at the dinner, every wrestler past and present makes or made a living by having people pay to see them, yet over 15 wrestlers, including Bret Hart, Ted Dibiase and Mick Foley, agreed to attend in support of the Professional Wrestling Hall of Fame.”

Dibiase even went the extra mile, donating $1,000.00 to the Hall for future endeavors. PWHOF President Tony Vellano was overwhelmed by the generous contribution and said a few words about his dedication to making the Hall bigger and better.

“On that night, every wrestler in attendance donated their time to the Hall. I can’t think of anywhere else where fans could sit down and spend four hours eating dinner with as many wrestlers as we had at this fundraiser. From Angelo Savoldi who began wrestling in the 1930s, to Mick Foley who wrestled a pay-per-view just a few weeks ago, I truly believe this will be a hard dinner to beat, but we will try again next year.”

After the meal, a few wrestlers took turns at the mic, giving fans an inside scoop on what it was like to travel with “The Million Dollar Man.” Hart recalled the first time he stepped foot in a ring with Dibiase and how pleased WWE agents were with the match. Hart remembered Pat Patterson specifically coming up and congratulating them, asking how many times they had wrestled before that. Patterson was shocked when Hart replied, “That’s the first time we ever touched.”

Foley talked about his recent PPV match with Carlito, and how prior to the match he came to Dibiase with an idea to pitch to Vince McMahon. Foley’s idea was to have the camera zoom in on a booger coming out of Carlito’s nose after his defeat, something that would make him seem, “Un-cool.” Interestingly enough, Dibiase pitched the idea to McMahon, but it was rejected.

Although the mic went haywire a few times, the crowd was still focused on hearing what the stars had to say, “Davey O’Hannon’s turn at the microphone eloquently summed up what life was like for a professional wrestler, both during and after his active years in the ring. Mick Foley gave the crowd some inside information regarding his most recent PPV match. Ted Dibiase and Bret Hart had the crowd in the palm of their hands when they spoke … you could hear a pin drop. Dibiase told stories of his wrestling days and also spoke passionately about his ministry work.”

While the main focus of the night was Dibiase, Hart was also treated to a little gift courtesy of the Hall of Fame, “Bret (Hart) was happy to meet the 86-year-old wrestler Tony Cosenza, who introduced Bret’s parents, Stu and Helen to each other.” Hart went on to thank Cosenza, stating that without him there would be no Bret Hart.

Dibiase’s wife Melanie was also in attendance for the festivities, saying a few words on what it is like being married to a professional wrestler, and the sacrifices Dibiase made throughout his career. At the end of the night Dibiase was presented with a trophy comprised of Dunkin’ Doughnuts boxes. When asked what his favorite type of doughnut was, Dibiase replied, “Round.”