Goodbyes and hellos at Fan Slam

TOTAWA, NJ – It’s no secret that fans find the wrestling convention scene to be over-crowded at this point. With conventions popping up on almost a bi-weekly basis, it’s become an unenviable task to undertake the responsibilities of running one. Through it all, “The Original Fan Festival” Fan Slam! strived and survived, once again giving fans a rock solid convention that included the send-off of a certain legend before he returns to WWE.

“The Native American” Tatanka made his final Independent appearance before he makes a full-time return to WWE. There was talk of the star returning after he faced Kurt Angle on Raw a few months ago. He was in good spirits and happy to be a part of the convention, “This will be my last appearance before I return to WWE, the contract has officially been signed,” said a cheery Tatanka before letting out an Indian Cry in honor of SLAM! Wrestling.

But as one legend makes his last Independent appearance, another one made his first since leaving the McMahon empire. Senior referee, Earl Hebner, joined the Fan Slam! family, participating in an autograph session and a very special Q & A Session, entitled “The 3 Count with Earl Hebner.” In the exclusive Q & A session, Hebner held nothing back, informing fans that what they had read on the internet was BS, and that the real story will be published in his upcoming book.

Hebner didn’t only focus on the negatives; in fact quite the opposite. On a lighter note, he listed his favorite wrestlers to work with, them being, “Stone Cold” Steve Austin, Triple H and Ric Flair. Hebner enjoyed his travels with Flair, but stated that he “couldn’t keep up with him.”

While it seems as though Hebner and Tatanka were on the microscope for the event, it was actually Bruno Sammartino whose name was used heavily to reel in the fans. Sammartino made a rare New Jersey appearance on yet another leg of his “Tour.” Ivan Putski was also in attendance and was excited to see “The Living Legend” in the flesh once again. “It was great coming here and seeing Bruno (Sammartino) again after all of these years,” Putski said. 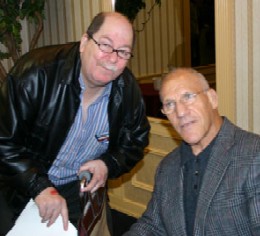 Bruno Sammartino poses with a fan. -photos by Chris Sokol

The Barber Shop was also open for business, with Brutus “The Barber” Beefcake cutting and strutting his way through the crowd. As odd as it seems, a few fans endorsed the the bulky barber, allowing him to use his “Shear” talent to style them a new look, and get a pic at the same time.

After returning from a long absence, promoter Tommy Fierro showed wrestling fans that he still had “It.” Fierro has been running these type events for many years, but it is undecided as to when and if another Fan Slam! will take place under his guidance.

Jimmy Powers of The Young Stallions summed up Fan Slam! to SLAM! Wrestling by saying, “It was a great event, I always enjoy coming out to the Fan Slam! conventions. I have a good time doing them, it’s something different.”