Saddle up with new Stampede book

For author Heath McCoy the writing of Pain and Passion: The History of Stampede Wrestling was not simply a historical chronicle of the territory, but a journey back through his own childhood.

The current Calgary Herald music journalist grew up in Saskatchewan and attended matches at the Saskatoon Arena. The larger than life characters captured his imagination. “Stampede Wrestling was such a major part of my life as a kid — as it was for generations of kids in the west — and revisiting those days in a significant way was a dream gig. In a sense I was reliving my childhood”. 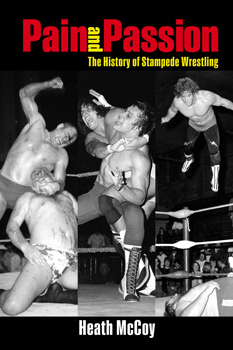 Despite his personal connection to Stampede, SLAM! Wrestling still posed the question: Why is a rock music reporter writing a wrestling book? McCoy began by acknowledging that he is a self-proclaimed “pop culture junkie” and is often interested in areas of entertainment that colleagues have written off as low brow, trash culture. “I believe wrestling is as important to the pop culture landscape as, say, Superman, Star Wars and heavy metal. It’s been a pop culture institution for several decades now. Hell, wrestlers were among the first television stars in the 1950s.”

The author found that there were quite a few similarities between the two outlandish worlds of pro-wrestling and rock ‘n’ roll. Both genres endure a hectic road life, entertain with over-the-top showmanship and action, but at the same time deliver their product as a real art form.

“Rockers and wrestlers are natural-born performers, giving their blood and sweat for the fans every night,” McCoy said. “And let’s not forget, the wrestlers were often living a wild, rock ‘n’ roll lifestyle on the road, before anyone knew what rock ‘n’ roll was.”

Part of what drew McCoy to cover the history of the territory was its similarity to a grungy punk rock show, all quality on a low budget. He elaborates by saying that WWE can at times display a heartless style over substance spectacle, similar to a glitz and glamour arena rock performance. The cut-rate studio production, technical wrestling, and hard-hitting style of Stampede is what gave it flare and eventual world-wide appeal.

McCoy is quick to point out that without the support of the Calgary Herald this book (published by a sister company to the Herald, CanWest Books) would not have been able to come to fruition. He was given a sabbatical and access to the Herald‘s wealth of resources, allowing him to delve into the rich history of Stampede Wrestling and what it has meant to the city of Calgary. “I like to think I made the Herald understand how important it was to chronicle this important chapter in Calgary history and in the history of Canadian pop culture. It’s fitting that somebody from Calgary’s oldest newspaper would be the one to tell this story.”

In many ways the rise of Stampede Wrestling in western Canada mirrored the growth of the area itself, in particular Calgary. McCoy discusses this in the book along with reminding the reader of how undeveloped the west was when Stu Hart brought in his vision for professional wrestling. One of the reasons that Stampede holds such a special place in Calgary’s heritage is because it was the only form of consistent live entertainment as the young city began to develop.

“Heading to the barn-like Victoria Pavilion every Friday night to see the fights was one of the city’s key attractions in the old days … it was a part of the city’s lifeblood,” he explained.Despite the comparisons that can be made between rock music and pro wrestling some may wonder what actual credentials McCoy has to document the odyssey of Stampede Wrestling? Well the answer is plenty.

Most recently McCoy was the recipient of the Gold Award at the 2005 Western Canadian Magazine Awards for his Stampede Wrestling article “Butchers, Stompers, & Cheats” from the Herald‘s insert, Swerve Magazine. In fact his first wrestling assignment was as an intern for the Herald in 1999 where he had the heartbreaking task of covering the tragic death of Owen Hart. Since then McCoy has periodically covered news stories on the Hart family on more pleasant terms, getting to know Canada’s first family of wrestling. “I came to understand the depth of (the Harts’) story. I was side-tracked a million times it seems, but finally I thought I can’t put this off any longer. This story needs to be told. Building these connections over the past few years with the Harts has proven invaluable for the making of this book.”

Some of the most fascinating and quite often most frustrating aspects of piecing together the history of Stampede Wrestling was the interview process with the Hart Family and other former stars of the territory. McCoy stated it was a thrill to be able to sit down with many of his childhood heroes and villains to discuss their memories of the Calgary promotion. 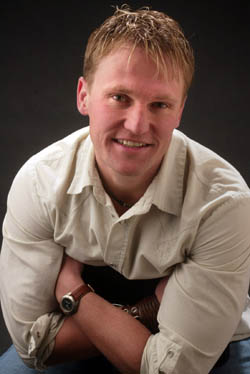 Possibly the most imposing figure that the author met with was Stampede heel, Bad News Allen. McCoy described that as a boy he watched Allen destroy his childhood favourites, and couldn’t help feeling a tad intimidated when speaking with this former monster. “I was in awe. Allen carries himself in such a way that you always tread sort of carefully around him. He’s just this big, intimidating, no-nonsense type of guy.”

However, getting a straight answer about a particular event or story quite often proved to be a daunting task, said McCoy. “Interviewing over 60 people as I did, you hear a lot of wild stories and you can’t take it all at face value. Much of it is second hand. Much of it is from people who are just unreliable. So there was a lot of double and triple checking on certain contentious stories.”

Whether it be tales exaggerated over time or former talent trying to swerve the truth for a personal agenda, McCoy found that the facts usually laid somewhere in the middle. He discovered that this was sometimes the case with the Hart siblings as dissension and division in the family runs deep.For instance, Bruce Hart gave McCoy an amazing three and a half-hour interview being extremely open to any question he had to ask about the promotion. When Bruce found that the author was speaking to rival siblings or an old wrestling nemesis he began being less co-operative and made himself unavailable, becoming irritated when anyone would contradict one of his stories.

Depending on who they were aligned with, the Harts would downplay or flat out deny what another family member had said, making it almost impossible to get a true definition on particular events. McCoy told SLAM! Wrestling that he decided the only viable solution was to put both accounts of a story in the book and let the reader decide on which telling was more plausible.

McCoy was adamant in stating that despite the occasional annoyances he has nothing but respect and admiration for the entire Hart family and all of their assistance in piecing together the details of Stampede Wrestling.

“Keith, Ross, and Alison Hart, along with Nattie Neidhart went above and beyond in terms of their openness and availability,” he said. “They really gave me a lot of perspective into the family.”

The first-hand accounts that the Harts provided were priceless … once McCoy could actually get a hold of them. Bret, Smith, Bruce, and the rest of the gang run on what Alison Hart calls “Hart Time.” This essentially means that the Hart family was more then willing to return McCoy’s phone calls to share old stories, however, they would contact the author anywhere from two days to two months after the original message was left. With looming deadlines for the book’s completion fast approaching, McCoy was often left wondering if a particular Hart would come through in time and deliver the requested information.The main appeal of Pain and Passion: The History of Stampede Wrestling will obviously be towards wrestling history buffs and fans of the territory, but McCoy hopes the book reaches a broader audience as well. “I didn’t just set out to write a wrestling book. I told a very human story. It’s a tragedy and a comedy all at once. It’s about family and community. With Helen and Stu Hart at the centre of this drama, it’s a very powerful love story too. I think it’s a story that can really reach people on many levels, whether they’re wrestling fans or not.”

Of course the drama from the heated backstage politics and outrageous road adventures, many of which have never been told publicly before, add to the allure of this 272-page paperback. McCoy’s wish is that anyone who experienced Stampede Wrestling in person or was simply enthralled by its story can relive and enjoy the memories from the promotion’s birth in the 1940s all the way up to the present day. “One target market I really hope to hit are the folks from all over that used to love Stampede Wrestling. Several generations grew up with this stuff and I’m hoping they can discover this book too.”

Although McCoy thoroughly enjoyed tackling this project, he plans to stick with his rock journalist employment with the Calgary Herald and not switch careers into a full-time pro-wrestling reporter. However, he does not rule out diving into another wrestling book venture sometime down the road. “I do have an idea for another book that would incorporate wrestling, rock, and pretty much all my so called trash-culture obsessions. But that’s off on the horizon at this point. Let’s see how this one does first.”