EDISON, NJ – Dressed to the nines and eager to impress, “The Doctor of Style” Slick made a rare appearance at a New Jersey convention earlier this month. Decked out in a funky hat and zoot suit, Slick showed that he is still able to captivate a crowd. 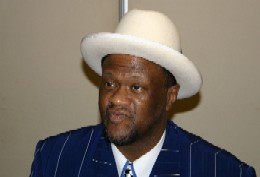 Now a preacher in Texas, Slick (Ken Johnson) started as a managed in the Central States territory around Kansas City before getting the call to head to the WWF. Among his charges in the Fed were Butch Reed, the Iron Sheik, Nikolai Volkoff, Big Bossman, Akeem, Warlord, Paul Roma, Hercules, Zeus and Rick Martel.

Slick, alongside Paul Bearer, Bryan Clarke, The Bolsheviks (Nikolai Volkoff and Boris Zhukoff), Typhoon and Kevin Sullivan were all part of the first autograph session.

Promoter Terence Brennan brought the third Legends of the Ring convention to Edison, NJ. Dealing with the last-minute losses of Sid Vicious, Doug Gilbert (Sid and Gilbert were coming together and gave Brennan less than two days notice of their no shows) and Brian Adams, Brennan was sent into panic mode, scouring the phone books for a worthy replacement, which he found in the form of Buff Bagwell.

After all the no-shows were appropriately taken care of, the convention went off with great success.

In the theme of being “Slick”, Brennan added to the production value of the show, utilizing a sound system that played music throughout the day, including entrances for the stars who were on hand. The first autograph session ran smooth thanks in part to numbered tickets, a benefit when it comes to keeping the line in control.

Typhoon, a rare convention go-er was also pleased with how things ran, “I thought the event was great. Everyone showed up, everybody was polite, very nice. It was just great being out here and seeing some of the guys.” With all the mainstream guests around, as well as various independent promoters, it was a surprise that recently-released WWE stars Kenzo Suzuki and Hiroko made a short appearence to sign autographs and take pictures, absolutely free.

From there, VIP ticket holders packed into a separate room where a Question and Answer session with all of the talent was conducted. The fans were more into this Q & A than previous ones this reporter has attended, not holding back when it came to asking the hard questions. This made for a more interesting, more provocative session. 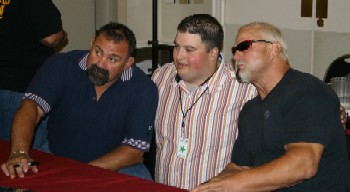 Rick and Scott Steiner pose with a fan.

“I had a great time signing some autographs and meeting some pretty people. So next time we’re in town, like the game show host says, ‘Come on down’, tough guy. Hooooo!” an enthusiastic Jim Duggan stated.