Kane bio as bad as his storylines

You almost have to feel bad for Journey Into Darkness author Michael Chiappetta. While a competent writer, he has the unenviable task of attempting to put WWE’s horrible storylines involving the character Kane into something that makes sense. The end result is more of a comedy then the horror/tragedy it’s intended to be. 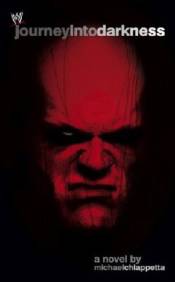 The story of Glen Jacob Callaway begins with him awakening from a dream to discover his family funeral home on fire. He is unable to escape or wake his family, and passes out to burn, awakening in the hospital believing his entire family to be dead. We then learn of the curse that has plagued his family. His mother, Susanna Kane (her maiden name, and thus how Glen came up with his wrestling character) is under the belief that her family was cursed, and anyone they befriend, including James Dean, dies or is badly hurt due to the association. Early in the book we also learn the reason for Kane’s imperviousness to pain — a disease called Hereditary Sensory and Automatic Neuropathy. The future WWE superstar can be hurt — broken bones, damaged ligaments — but he won’t feel it and thus is not receptive to the body’s natural way of saying “enough is enough.”

It is while in the hospital getting skin grafts that Glen meets social worker Melissa Vick, who brings her daughter Katie to try and break through to the sullen, damaged boy. While Glen would be shuffled around to different foster homes (with different, and at times tragic results) and lose touch with the Vicks, in high school the two would be reunited, resulting in Katie’s fiery death that would be part of one of the worst angles in wrestling history.After living in the mountains, Glen works on a dock and sees wrestling for the first time — including the man he knew as Paul Grimm, now known as Paul Bearer, and Bearer’s wrestler The Undertaker, who Glen recognizes as his brother Mark Callaway, long thought dead. Glen hunts down Grimm, who uses “chemicals” to build Glen into a revenge-fuelled rage, donning the red and black death mask that was one of only two things that survived the funeral home fire and assaulting his brother, culminating in their WrestleMania 14 showdown.

Some of the timing of events is off from the actual series of events in the-then WWF, and the story ends in 1998, which means things like Kane’s storyline with girlfriend Tori, why he wasn’t as scarred as the story makes him out to be after the second fire he is in, his on again, off again relationship with his brother once Bearer is out of the picture, his unmasking and his marriage to Lita aren’t included. Whether this is a blessing or a curse is up to you the reader to decide.

With the plethora of wrestling biographies to choose from, the 320-page paperback Journey into Darkness: The Unauthorized History of Kane is one that can easily be left off the “must read list.” While I give Chiappetta credit for trying to create something out of what the WWE creative team has made, in the end it’s a task that even the most talented writer would be unable to overcome.