With the World Series around the corner, Mick Foley’s new novel, Scooter, should hit a home run with baseball and wrestling fans alike. It’s a coming of age story of a boy named Scooter growing up in the rugged Bronx during the late 1960s and ’70s. Scooter struggles with many relationships throughout the story, especially with his father.

“So much of what’s in there on the pages comes from my memories of trips to Yankee Stadium and the importance of the Yankee games in my life,” Foley told SLAM! Wrestling. “The book is dedicated to my dad, but it’s certainly not meant to infer that he’s anything like the father in this story…I guess in some ways he is, but just not in the bad ways. 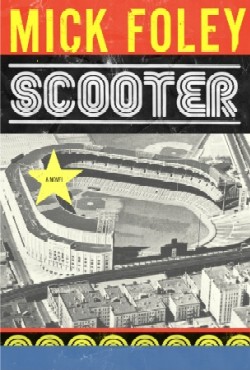 Like his wrestling promos, Foley has the impeccable timing and ability to make the reader laugh and wince with various lines throughout the book. In fact, the book starts off with a bang with the first line being, “Dad, what’s a dick?”

“It’s come to my attention that perhaps my years in wrestling have given me a slightly different view of human nature than anyone else might have,” laughed Foley. “I guess my look at events is probably going to be different than someone that hasn’t coexisted among a very strange cast of coworkers.”

There’s also a very funny, yet explicit description of the book’s main character receiving his first encounter of oral sex.

“I went back and rewrote that,” chuckled Foley. “The initial story probably belonged in the pages of letters to Penthouse. I purposely made it a little bit more comical and a little less graphic. I think anyone can use their imagination as to what was actually going on without me providing the Jim Ross play-by-play narration.”

Foley’s interest in writing about both baseball and the Bronx was a result of the events of September 11, 2001.

“I was actually upstairs in my room just waking up when my wife told me an airplane had hit the World Trade Center,” recalled Foley. “I imagined it being a small glider, some type of private flying mishap. I was actually two steps from the bottom of the stairs leading to the living room when the second plane hit and then it became very obvious that the first one had been no mishap.

“It really awakened my interest in New York City itself,” continued Foley. New York had been a place I’d go to and get out of quickly. The Bronx was a section of the city that when I was growing up you definitely didn’t want to stay in very long. I began to read in depth about the city and really got caught up in the Bronx and how generations had found it as a special place to raise a family. I incorporated what I learned along with many hundreds of hours of baseball reading to come up with something of a historical novel.”

Foley also explained how the writing process for Scooter was more exhausting than his first novel Tietam Brown.

“I was writing from about 9 p.m. to 5 a.m. every night. Then I was watching [his son] little Mick for a few hours in the morning. I was really hurting for sleep and I was over-caffeinated at all times. Long-term, the writing profession is worse for your health than wrestling is.”

When questioned how he thinks Vince McMahon views the writing career of three time WWE Heavyweight Champion, Foley responded, “I think he likes it. I think he feels that any success I have as a writer is by an extension a success for WWE. Believe me, for a while in 2003 I tried to shake myself of WWE. Once I realized it wasn’t possible, I came to enjoy the life-long affiliation.”

Wrestling fans maybe surprised to learn Foley used Scooter‘s themes of cowardice and redemption during his in ring return last year to WWE against Randy Orton.

“I think so many lives are characterized by one moment in time. Unfortunately for some, that moment can be a brief lapse in courage or a brief moment of inaction…I guess a brief moment of disgrace as well. I thought I’d put my own character out on the line and see what fans thought about the first wrestler to ever have a public crisis in courage. That’s not something that wrestlers have.”

While most wrestling fans embraced the execution of the Scooter-inspired angle with Foley and Orton, it was initially met with trepidation by those in the inner circle of the company.

Foley further explained. “I think it was a very successful storyline. It was not one that other wrestlers and people in the front office had a lot of confidence in. They thought the fans would turn on me in a heartbeat. I actually have more faith in the fans than that. I think they’re capable of grasping deeper themes than we give them credit for.”

When asked if Foley would consider being a writer or writing consultant for WWE now that he has two novels penned, Foley said, “Consultant would be the key word. I don’t think I could be a writer because there’s a lot of pressure coming up with stuff on a weekly basis and having people’s future in the tip of my pen. I would certainly be open to giving opinions, working with the younger guys and creating characters the fans could have an emotional investment in.”

Readers and fans may soon see Foley have an impact on the silver screen. When questioned about the possibility of his writings being turned into screenplays, Foley stated, “I get calls sporadically about people wanting to turn Have a Nice Day!: A Tale of Blood and Sweatsocks into a movie. I believe Tietam Brown will be turned into a movie by a very talented director named Timothy Bui. He is a Vietnamese American director who has did a couple of great small films called Green Dragon and Three Seasons.

“He found my book and really thought he could make a nice film version,” continued Foley. “He’s going to lighten it up just a little bit, not enough to ruin the feel but just enough to keep the viewers from wanting to go home and kill themselves.”

WWE.com recently announced that Foley has reached an agreement to return to the company in a television role in the near future ending speculation he might appear elsewhere.

Foley had the following to share with SLAM! Wrestling about his future projects and plans: ” I have four or five ideas for novels. I also talked to Vince McMahon a few months ago about doing an in depth look behind the scenes of Wrestlemania. Kind of taking the idea from a recent baseball book, Three Nights in August, which was a look into the mind of Cardinals manager Tony La Russa over the period of a simple three game series with the Chicago Cubs. I thought if I took that same idea and used it to get into the mind of Vince McMahon during the days leading up to Wrestlemania, including the event itself, that would give wrestling fans something that they have not yet had.”