KING OF PRUSSIA, PA — I was excited heading down to the WrestleReunion 2 Fanfest held this past weekend in Valley Forge PA. This event was designed to highlight and pay tribute to one of wrestling’s legendary figures, Bruno Sammartino.

I made the trek by air from Toronto to see old-time legends that occupied my childhood dreams back in the days when an armbar was clamped on and made an opponent squeal; guys like Harley Race, Nick Bockwinkel, Stan Hansen, The Funks, Ivan Koloff, and Dominic DeNucci.

Not staying at the same hotel as the event, I arrived early Friday afternoon and headed over to the Radisson Hotel in King of Prussia to get a feel for the drive and where I needed to be that evening for Mick Foley’s “On the Mike with Mick” one-man comedy show. As I stepped into the hotel around 5:00 p.m., I was greeted by several fans patrolling the foyer of the hotel in search of these legends. 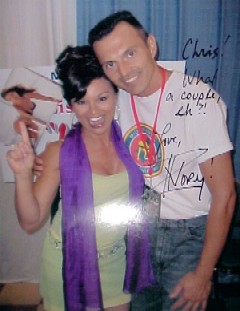 My first meeting was with Ivory, formerly with the WWE, and I was lucky enough to grab a pic with her as she proceeded to the check-in counter. She was very cheerful and enthusiastic and you could tell that being released by the WWE was not dampening her spirits. Just as she came in, “Magnificent” Don Muraco and his son Joe headed out of the restaurant towards the elevators. Then Diamond Dallas Page entered from the front lobby.

Wow, I thought, I sure lucked out! After all, I had just come to the hotel for a drive to see where I needed to be that evening.

I grabbed some pics with DDP and So Cal Val before a fan snapped my last picture — ME and BRUNO SAMMARTINO! He was on his way down to his Tribute dinner.

I decided I’d better get going, as I needed to re-stock my film and bring back some mags and pics I wanted to get signed. Upon my return, the foyer was busy and you could tell the fans knew that “This was the place to be.”

I entered the restaurant to grab a bite before dinner and as the waitress led me to my table, I realized that I would be sitting at the table in front of “The Mouth of the South” Jimmy Hart and Dr. Tom Pritchard; not only that but Greg “The Hammer” Valentine was sitting beside me with a fan that had joined him at his table. I was at the Rasslin’ Heaven Restaurant!

Just as I finished my Philly cheese steak, in walks former AWA World champion Mr. Nick Bockwinkel; let me stress the “Mr.” because this man was all class. Never mind the Nature Boy, Mr. Bockwinkel should be the image that every wrestler today should strive to emulate. He sat down with Hart and Pritchard. I was absolutely star struck as Bockwinkel had always been a champion I loved to see keep his title with the help of his “weasel” manager Bobby Heenan.

As I finished up and headed out to the lobby, I was lucky to be one of the brazen ones to garner pics and autographs of Valentine, DDP, Terry Funk, Mr. Nick Bockwinkel and former magazine editor Bill Apter before Mick Foley’s show started at 10:30 p.m. at Lily Langtree’s Dinner Theatre.

As we proceeded to the ballroom to partake in Mick Foley night, I met a New Jersey resident who was there solely for Bruno and was asking if I had seen him, to which I replied, “I actually snapped a pic with him just a few hours ago.” He was amazed and helped me obtain my next Polaroid moment, a photo with Bockwinkel and JJ Dillion deep in conversation.

The host for the show was former announcer Lee Marshall and he talked a bit about the premise for the night and then introduced Mick Foley to the audience. I just want to say that the show was very entertaining and, as you all know, Mick Foley is one hell of a story teller. He proceeded to recount comical tidbits from his days with WWE, WCW, ECW and Japan. Some of the ribbing was directed at Terry Funk, Al Snow (of course), Bob Holly, DDP, Ric Flair and various others that made his journey so special.

At the conclusion of the show, around midnight, we all headed back to that foyer where we were greeted by Harley Race and his wife just arriving and checking in. 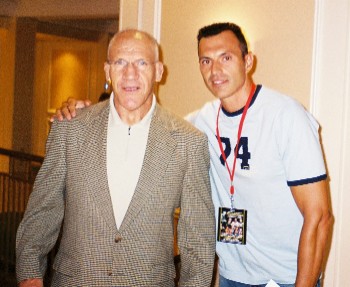 Just down the stairs, where Bruno’s Tribute Dinner had taken place, I noticed “Ice Nightclub” where I decided to head for a brew. I proceeded around the bar when I noticed D-Von Dudley, Matt Hardy and Tammy Sytch doing a bit of “partying.” More precisely, “Sunny” was doing the partying as she was obviously happy and “flashing” several patrons. Soon enough, D-Von and Matt took her outside for some fresh air. Later, Sytch started straddling Matt and trying to kiss him, all in good fun.

What a day! I had arrived in Philly around 3:00 p.m. and in 10 hours had met maybe 15 wrestling legends and superstars, seen Mick Foley in his own comedy special, had dinner beside Valentine, Bockwinkel, Jimmy Hart, snapped a pic with Bruno Sammartino, partied in the same bar with Matt Hardy, D-Von and Sunny and the Fanfest hadn’t even started yet!

Saturday started off with my most cherished moment at Wrestlereunion 2. I have started making a replica of the AWA World title which I had brought down with me and I was able to get Nick Bockwinkel to sign my replica belt!! Unbelievable!!

Lineups started early that morning and you could tell there was obviously a lot more people here than there were loitering around the Radisson lobby. The early arrival helped as I was through the lineups by 1:45 p.m. I had met and gotten autographs from Steve Corino, Larry Zybysko, Steve “Dr.Death” Williams, Hansen, Race, Bockwinkel, Terry Funk, Dory Funk Jr., Tito Santana, and The Patriot.

There were vendors selling DVDs, books, poster, etc., throughout the ballroom and one particular one, “Joe Price’s Championship Leather/NWA Florida” disappointed me tremendously. Here is a guy I ordered my replica Georgia Championship belt from back in October 2004 and to this date he has not delivered! Just wanted you all to beware of this guy and get your product BEFORE you make a payment to anyone nowadays. He also cancelled out of this convention … probably because he owes so many people belts out there.

A photographer was also there and I got my pic taken with Harley Race and Nick Bockwinkel, who brought with him his AWA Championship belt.

The second session started, and I was already exhausted from the night before and the morning’s excitement!

After going through the line, I was able to hold, wear and get my photo taken with Ronnie Garvin’s NWA World TV belt which was apparently “For Sale.”

I did not attend the Q&A sessions as there just wasn’t time for everything and I needed to pick up JJ Dillon’s new book, Wrestlers are Like Seagulls. He was very gracious and commented on my Mid- Atlantic Championship T-shirt and asked if I was in Charlotte last week for the big reunion there.

Up next were the Saturday night matches. They had set up 2,000 chairs for the event and I would say a couple hundred were empty, so the wrestling matches turnout was amazing.

The show was being taped for Clear Channel and DVD. The host was Jimmy Hart, and he did a great job of firing up the crowd. But from my own experiences, the Philly/Jersey wrestling fans have to be the most vocal and knowlegable anywhere, as they were chanting even when there were no wrestlers on display.

The show was very, very entertaining. It was easy to tell that the workers I used to watch, like the Midnight Express, knew how to wrestle. They were taught the basics and the basics is what came out. Even The Fantastics at over 50 years of age were far superior in their wrestling technique in their match to the younger teams. It looks like with these types of events/fanfests and a general explosion of indy wrestling that is happening, will come full circle to a territory system again, and WWE, look out! This time it might be your turn to vanish for awhile!

I did not attend the Sunday session, as my flight out was at 11:00 a.m. that morning, but the two days I spent in Valley Forge, PA, cemented in my mind what it was like to see “real wrestling” again the way it was meant to be and meeting legends I grew up idolizing and wanting to be like.

I ran into Dusty Rhodes in the restaurant before heading out that morning as he was grabbing a cappuccino at my hotel The Hilton. It just seemed right again that wrestling will again rekindle into a territory-based system where guys will eat, sleep, and live professional wrestling. After all, WE, the fans, still do! 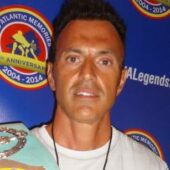