After a one year hiatus, Wrestling Revue magazine has returned…but with a bit of a twist. Within the highly competitive world of pro-wrestling magazines, editor/publisher Brian Bukantis is taking a unique approach by releasing his publication strictly online. 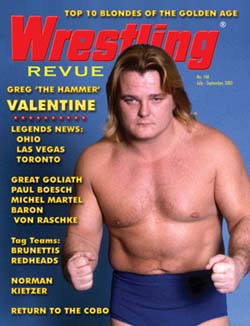 The latest edition of Wrestling Revue.

Arena Publishing purchased the rights to the Wrestling Revue in 2003, and the re-launched magazine was enthusiastically received by the hardcore, old-school fan. Nevertheless, after six quarterly issues Bukantis determined that the printing costs were too high to continue and operations were shut down; “Not enough sales to a very limited market to cover the large expenses,” he explained.

The new electronic version is no less time consuming than print for Bukantis to produce; however, it does give worldwide readers access to the issue at the same cost, regardless of location.

Bukantis said that another advantage to being online is that “more colour material can be included, that would not be in the print edition due to the expense of colour printing.” In fact, frequent contributor to the Wrestling Revue, Jim Melby, believes that the financial savings of electronic print may one day do away with the physical paper product of newspapers and magazines.

The original version of the Wrestling Revue dates back to the 1960s, long before “sports-entertainment,” when the world of pro-wrestling was seen as legitimate and for the most part taken seriously. Reporting on current wrestling news, the publication changed its focus once Bukantis’ group took over the reigns. The magazine now delivers stories and information from the “golden age” of the sport, covering topics from the 1950s all the way through to the mid-1980s. An intriguing aspect to the Wrestling Revue is that it is presented in a combination of historical accuracy and “old school” classic promotional hype. This is not an “insider” magazine, but goes in the opposite direction, reliving past storylines and characters with a heavy emphasis on the popular 1965-1984 time frame.

For example, the premier electronic issue covers the hall of fame career of Greg “The Hammer” Valentine, with many never-before-seen photos. There is also a classic interview with Baron Von Raschke, articles on the late Great Goliath and Rick Martel’s older, deceased brother Michel Martel, the top 10 blondes of the golden age, along with a report on the recent Pro Wrestling Hall of Fame induction ceremony. Of course, that’s only a sample of what lies in this 66-page, jam-packed issue.

Another intriguing component of this online publication is the “Mat Market Watch” section by veteran wrestling journalist Melby. The article serves almost like a Beckett Collectibles magazine, in that Melby gives a rundown of the often unique world of wrestling collectibles that are bought, sold, and traded over the internet. For any wrestling memorabilia enthusiast this is a definite must read.

The credibility of Wrestling Revue may be its strongest asset. Contributors to the magazine are not conspiracy theorist Internet fans, but experienced veterans of the business whose insight is invaluable. David Burzynski, one of the contributors and former manager “Supermouth” Dave Drason, explained the setup. “Wrestling Revue illustrated the past with writers who lived it, breathed it, and loved it with more passion than any others around the sport.” Burzynski started writing for the original Wrestling Revue back in 1967, while simultaneously writing for the Body Press program from the Detroit promotion. He then became further involved in the sport as a manager. Combine that with Burzynski’s infinite connections within the business and he adds first hand experience that is rarely found in today’s wrestling magazines. When asked about the importance of the publication, Burzynski responded enthusiastically. “WR (Wrestling Revue) was the only source keeping the spirit of when wrestling was wrestling, when fans had fan clubs … WR reported on these talents, these territories, complete with plenty of photographs to boot. It was a monthly breath of fresh air, something you looked forward to.”

Wrestling Revue‘s appeal does not stop at the “old school” written information as Brian Bukantis has an extremely impressive photo archive consisting of more than 24,000 pictures dating all the way back to the 1950s. Many of these rare photographs were acquired from Norman Kietzer’s Pro Wrestling Enterprises. Mr. Kietzer was publisher of numerous wrestling magazines in the 1970s and ’80s, including Wrestling Revue, and is a present contributor to this publication. Combine that with Bukantis’ personal photo collection, and the Wrestling Revue magazine has an unmatched compilation of historical snapshots from the “golden age” of the industry.

Ordering Wrestling Revue is as easy as going to www.wrestlingrevue.com. The magazine is downloadable in Adobe PDF format, and you do need the free Adobe software (a link is provided on the website) to read each quarterly issue. Since the file size is often large, it is recommended that a fast Internet connection and an up-to-date computer system is used for best viewing.

Editor/publisher Brian Bukantis, having shut down once, expressed hope that this time around, Wrestling Revue will find its niche. “The future status of the publication depends on the support from those who enjoy reading about classic pro wrestling. It’s a tremendous amount of work, and we hope there are enough people who like what we do.”