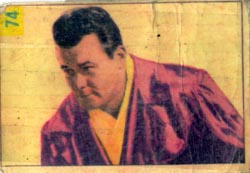 In wrestling parlance, a “carpenter” is someone who builds up an opponent. Frank “Scotty” Thompson, who died Wednesday, August 17, 2005, at age 84, was a carpenter’s carpenter. And he was proud of it.

“I spent about 15 years in the business and put over some of the best,” Thompson told SLAM! Wrestling’s Greg Oliver during research for the book, The Pro Wrestling Hall of Fame: The Canadians, which includes an entry on Thompson.

But Thompson’s story is about far more than wrestling. He was a police officer, poet, barber, motivational speaker, wrestling announcer, steelworker, actor, freezer and organ salesman, newspaper columnist, licensed hypnotherapist, and most importantly, husband to Betty for 62 years (62 years!) and father to two sons, Wayne and Bill, and grandfather (“opa”) to Lana, Michael and Nicholas.

The list of wrestlers the 6-foot, 225-pound Thompson put over was “a list as long as your arm,” and includes the likes of Gorgeous George, Hans Schmidt, Fritz Von Erich, Sky Hi Lee, Don Leo Jonathan, and Fred Atkins.

“The experience was great and I met a lot of nice people. The two most honest promoters I can think of [are] Mickey Barnes of Kingsport, Tennessee, and Larry Kasaboski of North Bay (Ontario),” he said. “The rest were either shady or downright crooked. Ed Don George treated me pretty good in Buffalo.”

One of those he put over really stood out for Thompson — the German marauder Hans Schmidt (Quebecker Guy Larose). “I distinctly remember working with Hans in Buffalo. I put him over in about two minutes. I must have done a good job because my wife got call up to one in the morning to see if I was alright,” Thompson said. “I was also working at Stelco at the time and some of the boys from work saw me on TV and were concerned. He returned the favour a year later at the Marigold arena in Chicago. This was the big time and he made me look good for about twenty minutes before he dumped me. A nice guy.”

Born August 11, 1921 in Hamilton, Ontario to Stuart and Gertrude Thompson, Frank G. Thompson faced a bout with polio in 1937 that left him with legs that were practically useless. With encouragement and physical fitness — especially swimming and exercises in the pool — he fought his way back, though the battle with polio ended his formal schooling.

The pool would play a part in his later life. It was at the pool where Betty said she first met Frank, as she lived across the street. (They married May 17, 1943.) As well, the wrestling matches were held on planks over the Hamilton Municipal Pool, and Thompson met the grapplers there and helped put up the ring on many occasions.

A gifted persuader from an early age, he convinced the air force to take him on during the Second World War, despite his gimpy leg. (The Army and Navy had turned him away despite his decent physique; a limp on his left side had given him away.) Thompson served in the transport division in the air force, with part of his four-and-a-half years in the service spent in England.

After the War, Thompson worked for the Ontario Provincial Police, based out of Niagara for a few years, and broke into wrestling in the late 1940s with Joe Maich in Brantford. After growing disillusioned with the police force, he worked at Stelco, where his father had worked for decades.

Thompson recalled working for Maich, using the name Danny Malone. “He was a jumping off point for many Hamilton wrestlers. We worked all the small towns around the area. I was working at Stelco at the time and wrestled on the side.” In a 1988 interview with Scott Teal’s Whatever Happened To… newsletter, Thompson said that Maich would “steal the gold out of your teeth. He was really bad.” For his first match, against Martin Hutzler, Thomson made $3.75.

After rejoining the OPP, Thompson got a break in Buffalo with Ed Don George and wrestled on the side while still policing, usually riding on motorcycle patrol.

In Buffalo, he became Frank “Scotty” Thompson and got some TV exposure putting others over. To hide his skinny left leg, which had no calf muscle, he wore Scotch plaid socks up to his knee, padding the leg leg. Never being able to get past 225 pounds, Thompson found himself dwarfed in big man territories like Toronto, where the average was 250 pounds and up.

Enjoying his wrestling experiences, Thompson took a chance with a mortgage and a wife with two young children at home, and went on the road despite his bad leg.

In Kansas City, he said promoter Orville Brown tried to cheat him by saying he’d arrived a week early and gave away his bookings. “Bibber McCoy helped me over the rough spots while I was there. He said I had the best arm drag in the business,” recalled Thompson. “When we were in Kansas together, he organized a ‘Baloney blowout’ so that we could have a pretty good meal. At least it was filling. … we used to boil water and add ketchup and call it tomato soup. There were many starvation days but we survived.”

He was realistic about his time in the business in 2001. “I am now eighty and have a hypnotherapy business. I never made big money in the business. My best and only good week was in Kansas City where I worked with Gorgeous George on Friday and the next night in Chicago with Hans Schmidt. The day before I worked with George, I had ten cents in my pocket and was trying to make a decision, should I have a donut.”

Thompson is at least immortalized in the 1955-56 Parkhurst wrestling card series, on card #74. “Graceful ‘Scotty’ Thompson is a leading favourite in Canadian and US mat circles, where his neat clean style is well known. Overcoming a severe attack of polio, Frank began wrestling as a member of the police force, finally turning pro and is now an established mat star,” says the card on the reverse of the photo.

His last go-round with wrestling came in North Bay. He’d not wrestled for a half dozen years, and he was vacationing with his family in North Bay at Dinty Parks’ cabins. “Larry [Kasaboski] asked me to fill in. I had not been on the mat for a few years. Like a dummy I did him a favour and ended up with a torn cartilage as a result of a tear in the mat. I spent the rest of our holiday on crutches.” 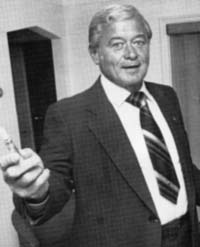 To many, a 15-year career in pro wrestling would be the pinnacle of one’s life; for Thompson, it was just a starting point. In highlight form, here’s some of the other portions of his life:

Thompson’s last profession was that of a hypnotherapist. (His license plate was even HYPNOMAN.) “It is giving me the opportunity to give something back. To see the results from clients who have successfully quit smoking or lost weight or have managed their anxiety or stress problems is most gratifying,” he said.

Hearing other people’s problems and helping them deal with it allowed Thompson to keep his own life in perspective. In late 2003, he was unable to attend the Titans In Toronto fundraiser for the Pro Wrestling Hall of Fame, but sent in a nice email with his regrets:

“My stock answer to people who ask me how I am doing is, ‘I haven’t a complaint in the world.’ I mean it sincerely. I have a great wife of sixty-one years, two sons who do me proud, two terrific grandsons and reasonable good health. What more can an 83-year-old man ask for? I love what I am doing.”

Over the last few months, Thompson had been in and out of hospital complaining about chest pains, said his widow Betty. In the end, a blood disorder that was a form of leukemia spelled his end.

“He went very, very peacefully,” said Betty, who was at his side along with their two sons.

As per Frank’s wishes, he will be cremated and there will just be a small family service.