WINNIPEG — No city gives more respect to their hometown boys and girls than Winnipeg. ‘Peggers came out in droves Thursday to welcome Chris Jericho for an autograph session in CD Plus at Polo Park Shopping Centre.

Jericho came to the River city in support of Fozzy’s latest album All That Remains. The line of an estimated 100 to 150 Jericoholics waiting to meet their hero snaked through the mall, even a half hour before Y2J arrived. 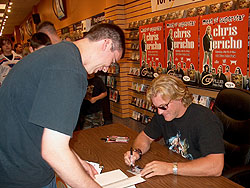 The first person in line was Randy Antoine, who waited outside CD Plus starting at 8:30 a.m. for the 3:00 p.m. signing. Antoine, who came with his younger brother, told SLAM! Wrestling that was drew him was, “the excitement of being able to see someone who’s great in the ring and a hometown hero.”

When he found out about Antoine’s dedication, Jericho was humbled. “It’s an honour to know that you have so many fans and those die-hards that come and stay so long,” he told SLAM! Wrestling on Thursday.

Jericho, who’s real name is Chris Irvine, admitted to being in the fans’ shoes years ago while growing up in Winnipeg. “It’s interesting, because I used to be that way too,” Jericho said. “I remember waiting at the (Winnipeg) Arena for AC/DC to get in the night before, like four in the morning.”

Yesterday was one of the few times Jericho has come home to promote Fozzy. The band formed in 1999 as a lark but Jericho now takes his second career as seriously as body slams and clotheslines.

“The biggest difference is (music) is the real deal,” Jericho told the Winnipeg Sun. He counts The Beatles, Iron Maiden and Metallica as some of his influences. “It just happens to be a band with a guy who moonlights as a wrestler.”

Fans from Winnipeg and across the world will soon get the opportunity to see Fozzy perform on Raw, as a battle of the bands has been announced for this Monday’s broadcast. Jericho and his troupe will square off against John Cena and his crew in a unique competition that rose out of clubs.

If experience counts for anything, Fozzy could come out on top. “We’ve played on Raw three different times, so we’re old hats at this,” Jericho said. “It’s typical Chris Jericho. There’s always more than what you see. It should be a lot of fun.”

Fozzy is touring Australia and the United Kingdom this fall and may hit Canada in November.