Jays catcher marks out for wrestlers

TORONTO — With their well-paid celebrity status, it’s easy to forget that baseball players can be wrestling fans too. And Ken Huckaby is easily the biggest mark in the Toronto Blue Jays lineup.

Wednesday night before the Jays’ 9-4 win over the Seattle Mariners, there was Huckaby, a backup catcher, out getting photo after photo with WWE legends Roddy Piper, Bobby Heenan and “Mean” Gene Okerlund. 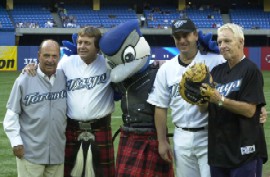 “I saw this was on the calendar two weeks ago, and I’ve been counting the days ever since,” Huckaby told SLAM! Wrestling. “My son and I, we’re still big fans. When they walked in the clubhouse today, I felt like I was five years old again. I couldn’t talk. I almost couldn’t get out of my seat.”

The 34-year-old, who wears number 20 and grew up in San Leandro, Calif., was a Hulk Hogan fan growing up. “In the early ’80s, he was everything back then. I always loved to hate Roddy because they always had the rivalry going. Bobby ‘The Brain’ Heenan represented all the bad guys in wrestling, so it was always fun.”

Huckaby, who caught the wide left ceremonial first pitch from Heenan, didn’t get anything signed, however. “I was more into getting the pictures with them so I could hang them up on the wall at the house.”

Piper did, however, receive an autographed bat from Reed Johnson before the game. Heenan also had some fun backstage. The Brain saw Eric Hinske in the clubhouse, and said “Great hitting last night” (referring to Hinske’s two home runs Tuesday night). Heenan stuck out his hand and, as Hinske approached, he went right by him pretending he was talking to someone else, leaving Hinske standing.

The whole evening, WWE Night at Rogers Centre, was designed to promote the launch on Rogers Cable of the WWE 24/7 subscription video-on-demand station. It’s synergy at its most persistent — Rogers owns the Jays, the Rogers Centre and had a new product to promote.

But Wednesday night was all about the little things at the Jays game. The announcer jokingly erred in his proclaimation, “scheduled for one fall, er, one pitch” for the opening toss by Heenan. The trio were all given Jays jerseys with their names on and the number 24/7. Ace, one of the Jays mascots, wore a kilt and leather jacket to resemble a blue, avian Piper; she playfully tried to get under Roddy’s kilt, and lifted her skirt at the umpires before the game.

Okerlund sat in on the TSN broadcast of the game during the fourth inning and came off as knowledgeable on baseball, but a little cloudy on the current WWE product, saying that Hulk Hogan versus Shawn Michaels is this Sunday at the Great American Bash pay-per-view.

During the Piper’s Pit segment after the fifth inning, Roddy talked about growing up in Toronto, sleeping in Lansdowne station, and boxing in the Lansdowne gym. He also mentioned that he flew in from Los Angeles where he is shooting a new movie called Honor. As he thanked the fans for coming out, the Blue Jay mascot, dressed in a kilt of his own, tried to take a peek under Roddy’s. Roddy gave a short chase, then knocked him over and laid him out with a few kicks before thanking the crowd again.

In the seventh-inning stretch, the trio got together again for a pretty horrible version of “Take Me Out To The Ballgame.” Reports Bob Kapur, “Gene’s ‘Rock and Roll Hoochie Koo’ and ‘Tutti Frutti’ renditions must’ve been flukes. But they were enthusiastic with it.”