Head to horn with Rhyno

At various times in a wrestler’s life, they reach a crossroads, and have to pick a direction to go down. For Rhyno, that time is now. His WWE career finished for now, he has a number of options to choose from. In the meantime, though, he is having loads of fun on the independent scene. SLAM! Wrestling recently sat down with the man-beast to discuss his return to the indy scene.

“Recently, I’ve been lining up shows both here and overseas,” he says, with plans to work in Italy, Australia, and possibly Japan. “I’m booked up through November, filling in some weekends here and there. I’m having so much fun right now, and when you’re having fun, and the pressure’s off, you can be so much more creative.” 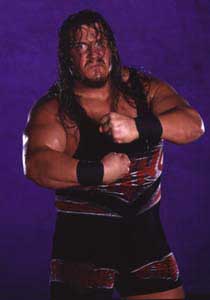 It was the creativity aspect that Rhyno found lacking during his stint with WWE. Prior to joining the company, he had enjoyed tremendous success in ECW before that company folded. Booked as an unstoppable monster hell-bent on destruction, Rhyno rose through the ranks quickly, and soon captured both the ECW world championship and the equally-prestigious TV title. His reign as unified champ would be short-lived, however, since the company folded soon thereafter. His WWE career was unfortunately halted by a neck injury before he could really establish himself with the company. And even after his return, fans lamented the lack of TV time that he was given. In the last two years, Rhyno was sparingly used, and seemingly forgotten about in the company’s booking plans.

It would be easy to blame the writers for failing to come up with anything substantial for Rhyno, but the wrestler is quick to put the blame on his own big shoulders.

“You can say the writers weren’t writing for me, and it’s all their fault. But you really have to take responsibility for your own self and your own actions,” he says. He draws on WWE owner Vince McMahon as an example of someone who does things the way he should have. “Vince is a go-getter. If something isn’t happening for Vince, he asks himself what he needs to do to go make it happen, and then does it. Vince wouldn’t just think that the writers had nothing for him to do and accept it. Vince would call them every day, and ask them again and again, ‘What do we got? What do I need to do? What do I need to change?’ And then do it. That’s what I wasn’t doing. I can’t put any blame on the writers. It would be easy if you just went there, and they had a great show written for you. But it’s not like that.”

Where-ever the blame lays, the fact remains that Rhyno is done with the company for the time being, and is hoping that he can find some of that creativity — and fun — on the independent scene. The indies, he says, allow him a tremendous opportunity to not just hone his own craft, but to help out the young up-and-comers as well.

“(The indy scene) is where guys — the stars of tomorrow — learn. It’s a place for me to go to help them learn. It’s exciting for me to see some of these guys who are fresh, young, and so excited to be there, and excited to learn. And I can sit and talk with them about wrestling for hours. About from the days when I was a fan, to the things I’ve learned in my career. If I can help them out and tell them something that can stick with them throughout their career, and make them a better person in wrestling, then that’s great. Because if they can draw money, it helps everybody else out — including me.”

He is the first to admit, though, that he doesn’t know everything — especially compared to some of the men he admire, the veterans who are teaching the younger generation on a daily basis in the locker rooms or as road agents.

“I really respect a guy like Pat Patterson who is an absolute genius. And Dean Malenko whose work, both in and out of the ring, I truly admire. I will sit back behind the curtain and watch the Undertaker, who goes out there and can rock a crowd every time. And Ric Flair, who is still one of the hardest workers in the business. To see him in the ring and give it his all, the man is truly amazing. Hopefully one day, I’ll be up there at that level.”

Of course, given that the business is generally considered to be at a low point these days, some might question whether the independent scene is indeed a viable choice, even in the short term. For his part, Rhyno is optimistic about the direction of wrestling.

“If you compare it to business three years ago, then (yes, things are not so good). But (it’s much better when) compared to business ten years ago. It all depends on what wrestling fans want, you know … You have to give them what they want. The hardcore wrestling fans will be there through thick and thin. The wrestling promotions are starting to give them exactly what they want, and I think the product is becoming more exciting than what it has been.”

He’s equally optimistic about the career he is going to have in the future, once the immediate crossroads are behind him.

“(I don’t see this as) the tail end of my career — hopefully, it’s just starting. Hopefully this is a transition from one company to another, or just in my career in general. Maybe I’ll eventually go back to WWE,” he speculates. “Maybe some independent promoter, or maybe TNA, or maybe overseas in All Japan, or Ring of Honor. My mindset is the same whether I’m at an independent show or whether I’m at WrestleMania. It’s about working your ass off, and giving the fans what they want.”

EDITOR’S NOTE: This interview was conducted before Rhino debuted on Sunday’s TNA No Surrender PPV.