The Ultimate Warrior is better known for his verbal skills than his wrestling ones. His words often land him in the thick of controversary these days, on the front page of wrestling news sites the world over. So it was with great anticipation that Ringside Collectibles released the brand new Ultimate Warrior Shoot Interview. 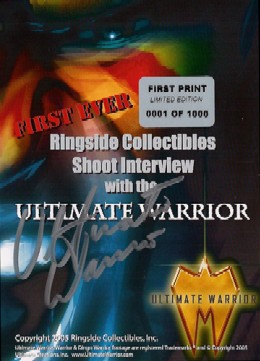 One word is all that’s needed to describe the interview portion — intense. Warrior held absolutely no punches and really laid the law down when it came to what he thought about certain people in the business. From calling Bobby Heenan a “Two-Faced Bastard” to talking about Ric Flair’s second run in WWE being an embarassment. He even said that Hulk Hogan had Warrior come to WCW, just so he could get his receipt for Wrestlemania 6.

Warrior did however praise some people, including his longtime rival, the late “Ravishing” Rick Rude. Warrior talked candidly about The Von Erichs, and what led to their early deaths. Warrior talks about traveling with The British Bulldogs, and talks about the comments Tom Billington (Dynamite Kid) made in his autobiography about Warrior and his lack of wrestling ability.

One of the most intriguing stories in the entire shoot was how WWE used Warrior’s “Always Believe” theme for their licensing expo back in 1996. Things really get emotional at that point, as Warrior details his discussions and ups and downs with WWE, and the way he feels he was used.

In probably the best question of the entire shoot, Warrior was asked about being “blown up” as soon as the match started. Warrior admits to it, and gives an explanation as to why his entrance was the most important thing for his character.

Warrior also threw a little irony into the mix, claiming that his squash and disregard for Triple H back at Wrestlemania 12 might have driven Triple H to want to be as good as he is today. Warrior also comments on The Renegade character in WCW, and how he thought that was WCW’s way to piss him off, so he would be forced to come to WCW and save his character.

Warrior is blantanly honest the entire time, and that really makes for a good shoot. The audio and picture were clear. The camera was right next to the Warrior and caught every bit of emotion. There were no distractions or anything during the shoot, so it was very easy to hear what Warrior was saying. Everything came across crystal clear. Brilliant production.

Warrior Q & A Session at the Ringside Collectibles Fanfest 2004

Classic early Warrior right here. You gotta love the mustache. Hart’s men destroy the U.S. Express, getting the Dingo Warrior off to a good start in his professional career.

Dingo Warrior destroys two jobbers and pins them both, a requirement in the match. Warrior really got a big push with the Von Erichs.

An amazing shoot, with great production quality, tons of stories and information, classic matches, and the cover is signed by The Ultimate Warrior himself; how can you go wrong? With this shoot being a great success, I would only hope that Ringside Collectibles releases some more shoots. They know what they’re doing, so maybe somewhere down the line, we can all be treated to another great shoot. But, until then, buy The Ultimate Warrior shoot, you’ll be glad you did.

You can order The Ultimate Warrior Shoot Interview at www.RingsideCollectibles.com.