Few details are available at this moment. 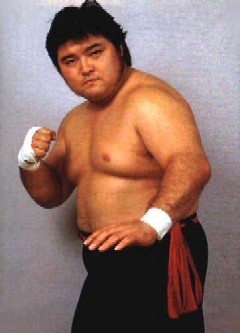 Hashimoto not wrestled for a few months following shoulder surgery in December. He had also been trying to revive the Zero-One wrestling promotion, which he helped start and had a falling out with.

A 20-year veteran, Hashimoto has been a headliner in Japan for over a decade. The stocky, 6-foot, 300-pound Hashimoto was known for his stiff action and spinning kicks.

He started wrestling in the fall of 1984 in Japan. Hashimoto came to the attention of North American fans three years later when he came to Calgary’s Stampede Wrestling, where he worked as “Hashiv Khan.” From there, Hashimoto went with Shinji Sasazaki to Jerry Jarrett’s CWA promotion in Memphis. He also spent some time training with Brad Rheingans in Minnesota before returning to Japan in 1989.

Never a svelte figure, he’s been called the “Japanese Elvis” — going as far as dressing up like The King. As as single, he is a three-time former IWGP champion, an All-Japan Triple Crown champion, NWA World champion. As a tag team wrestler, Hashimoto held titles with Masa Saito and Naoya Ogawa.

Samoa Joe reflected on Hashimoto’s death in his blog: “Hashimoto’s popularity was no accident as he represented the very essence of the much vaunted Samurais of old. He was a single ideal, by any means necessary, no questions asked, decisiveness personified. Enter the ring and destroy the opposition that is in front of you. Hakaio.”

In the year 2000, he was voted into the Wrestling Observer Hall of Fame.

Over the past couple of years, Hashimoto made cameo appearances in two Japanese films, Muscle Heat and Shin Karate Baka Ichidai.