For Chris Jericho, the way to work a live show is similar, whether he is slamming on his axe or slamming an axe handle on an opponent.

Jericho, who is a dual-entertainment superstar, sees the WWE wrestling crowds and Fozzy’s music fans as being one in the same when he works in front of a packed house.

“In a live setting, it’s very similar,” Jericho said in an interview with SLAM! Wrestling earlier this year. “They’re both very high energy, very aggressive forms of entertainment and they both feed off of energy that you get off the crowd, and it’s up to me, wrestling with WWE or performing with Fozzy, to make sure the crowd gets into it and make sure they have a great time.” 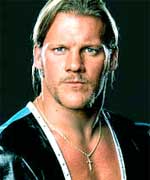 While some who work in two sport or entertainment industries have trouble balancing schedules between the two, Jericho has found that WWE and Fozzy have been very easy schedules to balance, thanks in part to the Fed’s support of his musical career. “They’ve been very Fozzy friendly,” Jericho said, “because they realize the bigger the band gets and the more of a name the band gets, the better it is for me and the better it is for WWE. This is the only time in the history of WWE that they’ve ever had somebody working for them that has a band that’s actually doing something, that’s actually getting some form of success.”

Inevitably, whenever conversation concerns a wrestler who is a dual-entertainer, the topic of leaving wrestling for the second profession will arise. Since The Rock has been able to do it successfully, there has been question as to whether other mat stars will leave the Fed to pursue a Hollywood career. With Fozzy gaining a measure of success in the music world, Jericho can see a point down the road where he’d concentrate more on the band than the wrestling ring.

“I’ve been wrestling for 15 years and I still enjoy it and it’s what I want to do, but I’ve been a musician a lot longer than I’ve been a wrestler. I started playing in a band when I was 14 years-old and it’s something I’ve always wanted to do as well. Now that the band is taking off, we’re getting airplay all across the world and over 50 stations in the United States playing Enemy and we got the Critic’s Choice Award of the week in Billboard Magazine and we did a sold-out tour of the UK and we’re going back in May.”

“I want to take the band as far as we can go with it. It’s an exciting time for me to be a part of this band. Who knows; if we end up going multi-platinum and then start taking off, I probably would spend more time with the band.”

While Jericho has been working in WWE, he has seen the company change, including in its name due to a legal situation with the World Wildlife Fund. While his band’s name is currently also being used by Jim Henson Productions, Jericho is not fearful of most that could potentially approach him over the title. “I think I can take Kermit and Grover, but if Animal comes after me, I think I might be screwed,” he said.