Today’s wrestling scene in Quebec is a myriad of acronyms and haphazard promotions, running shows big and small in Canada’s second-most populous province. But nothing linked them all together — until now. 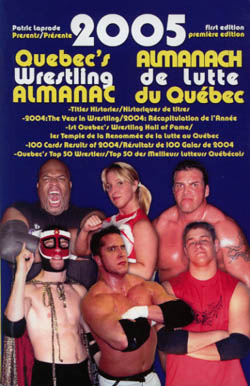 “There are over 20 promotions in the province of Quebec, some bigger than others, and I really think that if you are a real fan, you want to know more on the wrestlers you watch and on the promotion you go to,” Laprade told SLAM! Wrestling. “But also, [the almanac] makes people see what else is done in Quebec. The fan who goes to one federation maybe doesn’t know that there are other feds. I think it gives a visibility to most of the promotions.”

The 28-year-old Montrealer, who works in security when not dabbling in wrestling as Big Sexy, grew up loving wrestling magazines, especially the feature editions like the Pro Wrestling Illustrated annual almanac. In February 2004, he decided that the province could really benefit from a similar book. “My goal by doing this was to put Quebec wrestling over, mainly the guys who give their best each time they wrestle,” Laprade said.

“I based my book on the same categories PWI uses and I started to search for information on the web,” he said. “My sources were the message boards on Quebec wrestling, the promotions’ websites, books I had, like Pro Wrestling Hall of Fame: The Canadians by Greg Oliver and Wrestling Title Histories by Gary Will & Royal Duncan.”

It took him a full year to put it all together, and the information in the almanac is updated to December 31, 2004. There is a brief history of wrestling in Quebec, the top news stories of 2004, some statistics, a Top 50 ranking of current grapplers, title histories for both the current belts and defunct promotions, results and a Quebec Wrestling Hall of Fame.

“I didn’t want to do an almanac and just talk about 2004, so I decided to create the very first Quebec Wrestling Hall of Fame,” he said. “I asked 15 Quebec wrestling personalities, some of them being promoters, bookers, former wrestlers, web journalists, to vote for this Hall of Fame. So in my point of view, it has credibility. I wrote a short bio on each of the 16 who had been voted into the Hall of Fame.”

From his years in the business himself, Laprade had lots of contacts. Getting them onboard wasn’t easy. “The most challenging part was to get the collaboration of all the people I needed. I know a lot of people in this business, here in Quebec, but I had to get a lot of them involve with my project,” he said. “I had a committee for the Hall of Fame, another one for the Top 50 and the Awards, I had to ask some people for pictures, others to get a title history or stats about wrestlers and so on. The challenging part was to ask people and make them believe in what I was creating, but as far as getting the collaboration by itself, I have to say that everyone responded very well. I don’t recall any person saying no to me.”

Laprade wrote the book in French, then relied on three friends for the translation. The book is self-published, and Laprade laid out the final work with some friends.

So far, Laprade’s been thrilled with the response. “Fans seem to love it, wrestlers and promoters too. I had good review and good comments by everyone so far. Paul Leduc did a story on it in his column on RDS website, TSN’s sister station, and on NWA-TNA Impact, on RDS TV, there is a segment where the announcers talk about Quebec wrestling and they actually talk about my almanac.”

He’s committed to doing another edition for 2005. “If it goes well, I’m planning to do this each and every year. I’m having a lot of fun doing this and since the reaction is so good, it just makes me do another one even more,” he said.