Patty Therre never imagined that she would make a living by writing about wrestling. 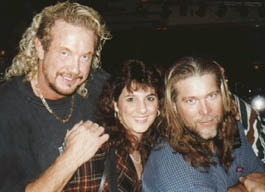 “I didn’t decide it. I was a writer for many years, published in many women’s magazines, as well as mainstream ones. I always knew I would write. I just never expected that I would write about, of all things, pro wrestling,” said Therre in an exclusive interview with SLAM! Wrestling.

The former executive editor of WCW Magazine remembers watching wrestling for the first time in 1989 with her then four-year-old son, thoroughly convinced that it was a bad influence on him. Therre admits that she knew nothing about the mat game at the time. The very mention of professional wrestling filled her mind with images of oversized men in undersized tights pretending to fight. Soon, however, a curious thing happened.

“After several months of watching with my son, I realized it was no longer to prove how ‘bad’ wrestling was. I was starting to get hooked on it,” said Therre.

Even after her son abandoned wrestling for the Teenage Mutant Ninja Turtles, Therre kept tuning in to WWF television to watch the latest developments unfold in the never-ending saga of steel chairs and spandex. She was particularly drawn to a young Shawn Michaels, who she calls her first favourite. It wasn’t long before she was posting on Internet message boards and writing an opinion column for a free wrestling newsletter. Still, she never expected to become the editor of a wrestling magazine.

Her big break came after she spotted WCW Magazine publisher Colin Bowman online and accused him of being a fraud. After discovering that Bowman was indeed who he claimed to be, Therre asked to interview him. Bowman agreed, “because it was one of those funny situations, and you can’t take yourself too seriously.” Therre forwarded him a copy of the finished interview, which impressed Bowman so much that he asked her to write small recaps of WCW shows.

“I was moving myself over to the U.S., and it made sense to hire an editor who was based in the U.S. and who was internet savvy, so I just decided to take a chance on her and offer her a trial,” said Bowman, a Brit.

Therre leapt at the chance to contribute to the magazine, but worried about her unfamiliarity with WCW. “I was delighted but also terrified. I was a WWF fan and barely watched WCW. However, I’m a fast learner and quickly caught up on things,” said Therre.

Six months later, Therre finally met Bowman in person when she was hired as the magazine’s new associate editor. Her hard work paid off as she rapidly ascended the magazine’s ranks.

“It was amazing. In a year’s time, I was elevated to executive editor and was working out of my own office in New York, burning up the phone lines to discuss things both with my publisher in Florida and our designers and printers in the U.K. It was crazy, but it worked,” said Therre.

Therre is most widely known for pioneering the magazine’s popular ‘On the Fringe’ column, a monthly account of the goings on at WCW written by a woman for women.

“Because I am one, I felt that magazines overlooked us and I wanted to be the one who spoke to women fans,” said Therre. “‘On the Fringe’ did exceptionally well. The feedback and the fan base were incredible.”

“I knew from my research that a huge part of the wrestling audience was women, a fact totally lost on the higher-ups and my successors at WCW, so it was a no-brainer,” added Bowman.

Working from her New York office, Therre spent most of her days on the phone with Bowman, the magazine’s designers, and the wrestlers themselves. The rest of her time was spent backstage at WCW shows snagging exclusive interviews with some of the promotion’s biggest names.

“I was nervous. After all, these people were huge stars and I was just a writer. I would stand backstage and watch the stars talking, going over their match ideas, goofing around, and I seemed to be invisible to them,” said Therre. “It took me a while to be able to walk up to a star when he or she was backstage and introduce myself and be taken seriously.”

“After that feature ran, and then other interviews I did came out, I had very little trouble about being taken seriously,” said Therre. “Although I wrote a monthly column for women, I knew when to be serious and write a good, solid interview. Once that was established, I rarely had a problem. The only problem I can recall is being sent into the men’s locker rooms to do interviews. I wasn’t real comfortable in there, but I did venture in there when need be.”

Therre usually interviewed WCW stars on neutral ground, like an empty arena or on the backstage steps. She was always mindful of how others perceived her, sometimes professional to the point of seeming unfriendly.

“I didn’t want to be seen as a bothersome fan or, worse, a woman who was using her position to get close to the wrestlers,” said Therre. “I think if a woman takes on a job where men make up the majority of the population, particularly a company like WCW, she has to decide how she wants to be perceived. I choose to be perceived as professional and there to do a job, although later I was much more comfortable with almost everyone and didn’t feel so out of place.”

Unlike her male counterparts, Therre had full access to the women’s locker room and saw WCW through the perspective of the promotion’s female stars. Friendships were forged, and Therre learned a lot about the men simply by spending time with the women. She gained the respect of everyone backstage by avoiding gossip and nasty rumours.

“The one thing I had to prove to the boys was that I wasn’t watching their every move and reporting back to anyone,” said Therre. “What happened on the road, stayed there.”

As a result, the wrestlers always showed Therre a great deal of respect and were, for the most part, cooperative with her. She was keenly aware that “On the Fringe” was more highly read backstage than anything else she wrote, and worked extra hard to be taken seriously.

“You have to remember, all the time I was trying to be perceived as professional, I was writing a column for women, ranking the hot guys and talking about what female fans were writing in to me about,” said Therre.

“He said not to leave him out, but to just put him in the ‘warm’ section so there would be no trouble,” Therre said.

Therre witnessed WCW’s meteoric rise firsthand during the mid ’90s. She describes the atmosphere backstage as “very confident,” but remembers wondering how the promotion could make money while spending so much of it. She also got the impression that the inmates ran the asylum, and often wondered who was in charge. “The ones who made huge decisions seemed to be people who were not in a position to do so,” said Therre.

The phenomenal success of the New World Order meant that WCW Magazine was essentially split in two, devoting half of its coverage to WCW and half to the nWo. Therre liked the concept of invaders taking over WCW’s turf and vividly recalls a feeling throughout the company that something big was happening. She thinks the little things, like keeping the nWo and WCW factions apart outside the arenas, made the angle so successful.

The decision was made to publish WCW Magazine in-house as a cost-cutting measure in 1999. Therre stayed on as a writer for WCW’s website while also frequently contributing to 1wrestling.com. She wrote for several other wrestling magazines, most notably World of Wrestling, and also had a brief stint as editor-in-chief of the now-defunct RollerJam Magazine. She also penned a weekly wrestling column in the Syracuse Post Standard. One of Therre’s more notable achievements after leaving WCW Magazine was launching her own website to continue writing for women. The site is mainly geared toward a female audience, although recently strides have been taken to make it more co-ed.

“I still maintain that it is a site primarily for women, and I have mostly women columnists writing for me,” said Therre.

Therre is also a regular columnist for Power Slam magazine in the U.K. Her former publisher, Colin Bowman, introduced her to Power Slam publisher Findlay Martin, who asked her to contribute to his magazine.

“I believe I’m the only woman ever to do that, and I’m very proud of that magazine,” said Therre. “It’s for the very smart fan and pulls no punches. It’s great to be a part of something so fresh with no ties to any promotion.”

Writing for Power Slam is completely different from the other magazines Therre has written for. She’s had to overcome a language barrier that seems as vast as the ocean dividing the two countries. “The Brits demand smart, no nonsense writing and have a very dry sense of humour, which I am still learning about. But it has been nothing if not a positive experience at Power Slam,” said Therre.

A frequent contributor to many mainstream publications, Therre occasionally finds wrestling terminology slipping into her everyday speech. She removes terms like ‘work’ and ‘shoot’ from her vocabulary when she makes the transition back to the mainstream media. The Syracuse native is still a diehard wrestling fan, but is disappointed by the current role of women in wrestling. Therre points to the WWE hiring non-wrestling divas over talented female workers as proof of the diminishing role of females.

“I think it’s a sad time for women in wrestling, because they add flavour, spice, and, yes, sex appeal, to the shows when used correctly,” said Therre.

She feels that most men would prefer to watch women who can actually wrestle over lingerie pillow fights, and calls the WWE women’s division a thing of the past.

“I know WWE thinks it is appealing to the young male demo when they have lingerie pillow fights and the like, but from what I can tell, even the guys are rolling their eyes at this stuff and want substance,” said Therre. “Now, with a few exceptions, the women are interchangeable.”

According to Therre, there is still a market for a fresh, smart wrestling magazine with the right concept, but the WWE’s media gag rule has made it nearly impossible to even print photos of its stars without the threat of a lawsuit.

“I think that a magazine can survive, although many have tried and failed. I think eventually someone will find the right concept and the right niche and be successful,” said Therre. “However, without access to many of the biggest stars in American wrestling, it won’t be easy.”

Looking back, Therre takes pride in her accomplishments in the wrestling business and her reputation as a consummate professional. “I chose to stay very professional for a long time and to prove myself by my work rather than using the fact that I was a woman in a male-oriented workplace to get ahead,” said Therre. “I went into WCW Magazine and all I knew was that I had some ideas and I wanted to put those ideas to use. Luckily, Colin Bowman was very open to almost everything I suggested and I think we did some fun and different things during the time I was there.”