Chris Jericho has been one of the most successful two-industry stars in World Wrestling Entertainment with his rock band, Fozzy.

Fozzy, which features Jericho as its lead singer, has been making a name for themselves in the music industry since their self-titled debut CD was released in 2000. The band has just released their third album, All That Remains, and has also appeared on two compilation CDs: WWE Originals and Spin The Bottle – An All-Star Tribute to Kiss. 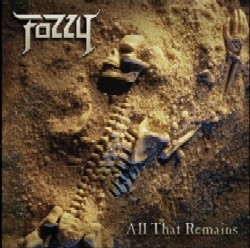 Going into All That Remains, Fozzy had a different mindset as this would have a different format than their first two albums. “Our last two records were basically based around cover tunes. That’s how we started the band,” Jericho told SLAM! Wrestling. “But then as we continued playing and as our fan-base grew, we realized that we had great chemistry as players, great chemistry as song-writers; that’s when we decided that the best would be to continue on playing our own material -– writing and recording our own stuff as any band will.”

“Even though it’s our third record, in a way it’s like our debut because it’s our first record of all-original stuff.”

Along with the change in CD format, Jericho also went under a stage change, dropping the stage name Mongoose McQueen. McQueen, as Jericho explains, was a persona he had adopted as part of their cover-heavy act, but the style change brought about the use of his more common identity. “We wanted to come up with something that was more than just another band playing covers, so we came up with a little bit more of a creative concept, that the songs were really our songs, that were stolen from us while we were stuck in a bad record deal in Japan,” Jericho says. “We came up with this Blues Brothers/Spinal Tap-type thing, and it was good, it was lots of fun. Part of that was adopting different names and playing characters, but now that we’re doing our own thing and playing our own tunes, we took the make-up off, we took our masks off.”

Jericho, whose real name is Chris Irvine, has gone deeper into the music market, hosting Rock of Jericho on XM Radio. After guest hosting a couple shows on the Internet music station, Jericho was asked by the station’s producer if he’d be interested in doing his own show. The show, which debuted this month, has been an enjoyable project for Jericho. “So far, so good; it’s a lot of fun,” Jericho says. “I just take a portable DAT machine on the road with me to record all my stuff, wherever I may be.”

While Fozzy does not have any Canadian tour dates currently listed on their website, Jericho is anticipating the opportunity to hit the stage in his home and native land soon. “I’m looking forward to getting a chance to come to Canada and play some more shows,” he says. “We have great shows in Canada, it’s one of our favourite countries to play in; so hopefully we’ll get to play more in the future.”