MONTREAL — On February 12th, Petey Williams celebrated his first visit to the province of Quebec by winning the Elite Wrestling Revolution heavyweight belt and becoming the first non-Quebec native to win a major championship in over 20 years. And this past Saturday, it was NWA Quebec / CWA that welcomed this young, exciting grappler.

To say that the promotion’s NWA affiliation was the only reason for Williams came to Quebec would be a stretch. But since TNA only has show tapings every two weeks, and since he wants to continue improving, Williams has to find more work. 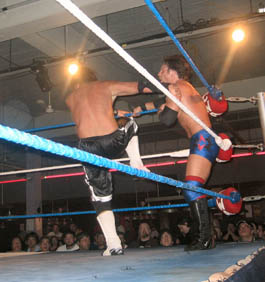 “The thing with TNA is they’re building their business right now, and it’s difficult because we only have a taping every other week, and then a pay per view once a month, so if I only did that, I’d be sitting on my butt for two weeks doing nothing,” Williams told SLAM! Wrestling. “So I’m taking advantage of my spotlight on TV to wrestle other indies so I can earn a living doing what I love.”

His beginnings in TNA came right out of a fairy tale. He became the X Division champion and held the title from August 11, 2004 to January 16, 2005. When he won his title, it was a surprise; he had really only wrestled in tag teams as part of Team Canada during his six months with the promotion. “When I found out I was winning the title, I was so surprised, as I figured they didn’t know how I could do in singles matches as I only had one singles match in my six months with the company,” he said.

There is always pressure, no matter where you are the champion. “I felt the pressure about 15 minutes before the match and then trying to run with the title was made easier with the excellent opponents I had over that period, they are partly the reason why I was a champion for so long.”

Williams will be pulling away from Team Canada and get more involved in singles matches but he also relishes the chance of appearing for small local promotions. “I really enjoy wrestling for young promotions, because the dedication of the guys is second to none, with the limited resources they may have.” He has also recently made his first appearance in Japan.

Coming back home to Canada to wrestle was quite gratifying for Williams. Winning the EWR Championship was an honor. “I felt privileged that the EWR put so much faith and trust into me, it becomes easy for me to give them my ‘A’ game in return.”

But on Saturday night, it was a bit of a surprise to see Williams put over two very popular talents at the CWA show; Williams lost a very exciting and long three-way match against Alex Price and “Mr XTreem” Dave Silva, who claimed the win.

Also on the card, Jake “Paranoid” Matthews became the new CWA/NWA Québec heavyweight champion as he defeated Dru Onyx, who had held the belt since June 19, 2004. Both men left the ring bloodied. But not before a vicious attack on Onyx by Matthews, after Onyx extended his hand to congratulate Jake for his championship win. That’s when Michael Von Payton, Tank, Handsome JF and the newest arrival at CWA/NWA Québec, Nikko le Prince, who picked sides and showed their colors and allegiance.

Also, Handsome JF won against Tank when valet Misty Haven intervened and got him disqualified. The Twin Terrors, Razz and Koko Mansour, won their match against TNT Action, Jay and Alex Dynamite and will be part of the finale on the next CWA/NWA Québec card to determine the Canadian NWA tag team champions. Aftershock, Drake and Damian Styles, also qualified themselves of the same final by beating the Shawinigan boys, Guil Reno et Dave Pronovost. Sweet Cherrie and Jaguar beat Misty Haven and MVP Michael Von Payton, Justin Diamond won against Superstar Shane Hawke, and Santino Italiano with Kona, who was replacing the injured Nino Mancuso won against Damian Steel and Hellstorm.

The next CWA/NWA Québec card named NO FEAR will be on March 26th at Bogey’s World, 3250 Crémazie (corner St-Michel) in Montréal. The show starts at 8:30 with the doors opening at 8:00 p.m. You can get more info at: http://www.cwawrestling.com