The National Wrestling Federation was a promotion that sold out buildings, had a weekly television show broadcast throughout the U.S. on various cable access networks — and it was all run by a group of kids, most not even old enough to drive.

It’s been almost 20 years since the final bell rang at the last show of the NWF, but now the amazing story of this long, lost promotion has surfaced.

It was the dream of Shawn “Crusher” Crossen a wrestling fan who saw an opportunity and made the most of it, giving birth to an idea that took them further than they’d ever imagined.

Week in and week out the kids wrestled matches, cut promos and built a fan base all on their own. 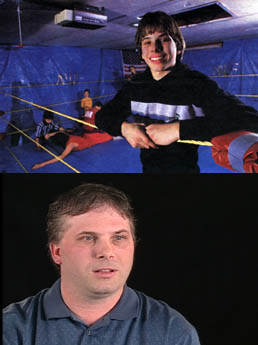 Shawn Crossen then and now.

“We basically were doing what we were watching, coming up with our own ideas. And that was back in days of traditional good versus evil, the story told itself. We would build up our feuds with different characters that we came up with and would lead from one event to the other,” Crossen told SLAM! Wrestling.

Originally, the NWF started as a group of kids staging matches in Crossen’s basement, then the local television studio, but it still wasn’t enough. The NWF wanted to grow and they got that chance.

“We had an article written about us in the Minneapolis Star-Tribune about our wrestling show and weekly cable show,” he said. “And right after that article came out, a local production company in town wanted to take me and my parents out to dinner. They thought the story was very interesting and they were preparing to do maybe some kind of after-school special; they didn’t know what it could be, they wanted to talk about it.

“The last thing they asked me was if I could have anything I wanted for the wrestling show what would it be, spare no expense. And I told them I wanted a live event in front of people with cameras just like you see in the big shows.”

The idea stayed in his the back of his mind until one day he found a way to make it happen.

They went on to hold a number of shows at the Anoka Armory, at one point selling it out with 450 people in attendance.

Eventually however, all things come to an end. The NWF was behind him and Crossen had moved up in the wrestling ranks and had been competing for Eddie Sharkey’s Professional Wrestling Association, even holding its lightheavyweight title.

But after a harsh falling out with Sharkey, he was burnt out.

“I just wanted to get away from it, when I saw how the business kind of works,” Crossen explained. “So for those, three or four years I didn’t do much watching wrestling. To be honest with you, what Eddie Sharky did and what I went through has happened to many others on the indy scene, and it really took away a lot of the dream had.”

Looking back, Crossen is proud of what he and his friends accomplished and is happy with the choices he’s made since then, but wrestling will always have a place in his life.

“I’ll never turn away from it,” he said. “I don’t think I missed out on anything I guess, because I made a choice.”

Now in his 30s, Crossen looks back fondly at those days. And after much time and work, everybody else can now share in those times too. Crossen recently released a series of DVDs highlighting the NWF’s biggest shows at the old Anoka Armory to go along with the book he wrote telling the story of the NWF, entitled Pro Wrestling Kids’ Style.

“I never really knew if there was any kind of a market for it at first, but when I saw all the backyard wrestling stuff that came out, I thought that if there’s interest then I wanted to show what we did and what we had, which was similar but on a whole different level,” he said. “How things can work on a more positive level, more constructively rather than just a bunch of kids messing around trying to hurt each other.

“As far as the book goes, that’s something I’ve always wanted to do, I just never really knew how to go about doing it,” he said. “It took about six months to do it because I didn’t want to rush myself and just hammer it out real quick.”

Of those involved with the NWF, Crossen still stays in touch with some, and there have been rumblings of a reunion. “I’ve got all the guys in the show that want to do a reunion card,” he said with a chuckle. “I’m not throwing it out, they know that I’m going to be the one that would have to do it. I haven’t really committed to it yet with them.”

His story has sparked interest from many of today’s young wrestling fans. “I’ve got kids all over the country e-mailing me wanting me to start the NWF up again for them, that’s the other thing that’s happening, but I don’t think that will happen soon.”

Jason Follett is a Newfoundlander and a product of the Holland College school of Journalism, and currently lives in Charlottetown, where there is no wrestling at all. He can be emailed at [email protected].