Cena greets fans in Calgary on road to No Way Out

CALGARY – Hundreds lined up at the Round Up Center during the annual World of Wheels show Friday for a chance to meet WWE superstar John Cena. The United States Champion, who is on a whirlwind autograph tour before heading to Pittsburgh Sunday for the No Way Out Pay Per View, was so popular that he went out half an hour early in order to accommodate as many fans as possible. The genuine smile on his face as he shook hands and signed pictures, magazines and action figures was matched by the grins of fans faces as they left the stage. 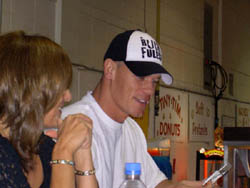 For Devin Defraine, who dressed like his hero in a jersey and Cena’s trademark lock and chain, it was a chance to meet someone he hopes to see across the ring in the future. The 18 year old hopes to break into the business. “I think Cena’s the next Rock. I love the business, and really wanted to meet him. He was a great guy and didn’t stick his nose up at the fans. I hope to be working with him someday.”

Many of the fans expect to return to the show Sunday, when former WWE Women’s Champion Lita will be signing autographs from 1:00 to 3:00 pm.

Backstage before he greeted the crowd, Cena took a moment to talk about his match tomorrow against Kurt Angle, with the winner getting a title shot at Wrestlemania 21 in Los Angeles April 3. While others would already be plotting their strategy against the winner of the JBL vs. Big Show Barbed Wire Cage Match, Cena is focused 100% on tomorrow’s match.

“I really hate to look ahead, especially with the luck that I’ve been having, I don’t want to look past an Olympic Gold Medallist in his hometown,” Cena told SLAM! Wrestling. “If I do end up making it through, not only will it be the main event of Mania, it could be champion vs. champion and possibly even a three-way. There are lots of different scenarios that can play out pending on Sunday’s result; it’s a big day.”

Cena is 0-2 in high profile matches against Angle. He debuted on Smackdown! in June 2002 by answering Angle’s challenge. Then on October 19, 2003, Cena and Angle stole WWE’s No Mercy pay per view with a grueling 18-minute match that saw the heel Cena tap out to the ankle-lock. With their roles reversed, you can bet Cena is hoping for a different outcome, but it won’t be without a fight.

“Kurt Angle brings out the best in everybody, and we are polar opposites. I dub myself the Terrell Owens of the WWE, winning is a concern of mine but entertaining is of equal concern,” Cena explained. “I am the guy who is doing good and telling everyone that, Kurt will work the hell out of you and make sure you come to fight because if you don’t you will be squashed.”

It’s a crossroads for both men, as Angle’s career is winding down due to injury, while Cena’s star continues to rise. It promises to be a stellar bout.

“I am really looking forward to the match, not only because of what’s at stake, but anytime you get into the ring with one of the best performers the business has ever seen it’s an honor. By the same token, you can’t pussyfoot around because he doesn’t rest on his laurels. He is a competitor until the last person leaves the arena. You’ve gotta be focused and hungry because if you’re not he’ll eat you alive.”