Imagine one day you’re wrestling in a YMCA rec centre when you get a phone call, and the next day you’re on pay-per-view. D-Ray 3000 is proof that it can happen.

The lanky, afroed D-Ray 3000 (Dorian Hill) has handled the fame in stride. Humbled and friendly, the 21-year-old is considered an unlikely hero in the wrestling business. Often referred to as a “goofy” or “silly” character, D-Ray’s in-ring abilities are far superior to what most might expect. 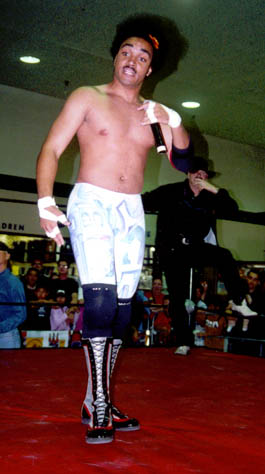 D-Ray 3000 rants on the mic during the Titans in Toronto wrestling show in September 2004. Photo by Corey David Lacroix

In 2003, D-Ray decided it was time to make the move toward NWA TNA, and he sent a promo tape to the front office. Nothing happened. But D-Ray had high hopes, and he sent his tape again.

He recalled how it came together in May 2003. “I talked to Scott D’Amore, and he told me to talk to Bill Behrens, I emailed him, told him who I was, and he gave me a date to come down.” D-Ray told SLAM! Wrestling.

He was given two dark matches, before a TNA contract was offered and ultimately signed. The name D-Ray 3000 came from his resemblance to Andre 3000 from Outkast.

While D-Ray credits his wrestling ability, he believes that it was his appearance that caught their eyes, “My hair, the way I came out, I mean who comes out acting like that?” he said with a laugh. Nonetheless, D-Ray 3000 was in the big time.

The national exposure the Detroit-resident D-Ray 3000 has received has proved to be vital. “I am getting a lot more Indy bookings than ever before, and I am just having a good time,” he said.

The 5-foot-10, 180-pound D-Ray has worked up and down the East Coast, and in Canada. He initially trained to be a wrestler under Windsor, Ontario’s Doug “Canadian Destroyer” Chevalier, when he was just 16, before heading to Pensacola, Florida for some finishing under Sika, one of the Wild Samoans. D-Ray is content with his place in TNA and and thankful for the experience that he is receiving within the promotion. “It’s helped out my career a whole lot.”

Upon entering TNA, D-Ray was paired with Shark Boy to form one of the most entertaining tag teams in the company’s history. “It was great working with him,” D-Ray said. The duo provided viewers with many laughs, while at the same displaying great continuity and flow in their matches. “He’s helped me out a whole lot, and I couldn’t ask for a better partner.”

The promotion has had fun with D-Ray, and has a tongue-in-cheek bio on him up on their website: “Fear The Fro! Hailing from Detroit, Michigan, D-Ray 3000 is the master of funk in TNA. What’s been the key to D-Ray’s success in TNA? It’s gotta be the hair!”

Despite accomplishing one dream, D-Ray 3000 still has other hopes. “I’d like to get some more overseas experience, but I’m loving what I’m doing right now, and I hope for the same or better next year.”

Occasionally, he has to shake his ‘fro in disbelief; his dream of becoming a professional wrestler has come true. “I am surprised people liked me so much, and I’m glad they do. I’m loving this.”