For “Luscious” Layne Fontaine, professional wrestling has always been a continuum of learning. 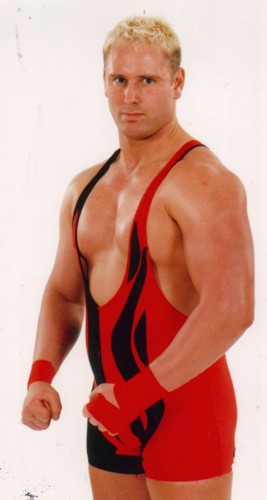 The journey began in Abbotsford, B.C., where a young, Todd Layne Fontaine grew up mesmerized by the technical stylings of Ricky Steamboat and The Dynamite Kid.

“The Dynamite Kid was the first wrestler I remember seeing as a kid,” recalled Fontaine, now 29. “I was watching Stampede Wrestling when I was three or four years old and all of a sudden out comes this guy that was just fast as lightning and amazing in the ring.

“With Steamboat, he was one of the only guys that could suck me into his matches emotionally where I was into it, on the edge of my seat, plus there was never a smoother wrestler around.”

Determined to emulate his idols, Fontaine wracked up an impressive athletic background, particularly focused in martial arts. The experience came in handy when it was time for Fontaine to choose a finisher for his future wrestling days. His Luscious Lock is a submission move that Fontaine describes as an “altered judo crucifix.”

“I’m surprised I haven’t seen anyone use it in wrestling,” he observed. “It is like the worst thing to get caught in. It is basically a neck crank and it is next to impossible to get out of. When you are in it, it really sucks.”

But all the kick boxing and jujitsu still left Fontaine at a “super skinny” 157 pounds. He began weight training and managed to bulk up to 180 pounds.

Armed with some extra poundage, Fontaine decided it was time to give wrestling at try. In 1997, under the tutelage of Timothy Flowers (better known to some as “Diamond” Timothy Flowers) he began his professional wrestling training in of all places, a boxing ring.

“It was a whole lot of fun,” laughed Fontaine, who know stands at an even 6’0″ and weighs in at 230 lbs. “It wasn’t a nice springy ring like a wrestling ring. I left there with my organs hurting a little.”

Besides learning how to bump and take falls, Fontaine was versed on how to promote a show, the fine art of ring psychology and to go beyond the trend of “shock wrestling.”

It is also where he got the nickname, “Luscious.”

“It was kind of a rib actually,” he admitted. “One of the guys I was training with just threw that on my name because he thought it was funny. Tim Flowers got a good chuckle out of it too because that’s what I was booked as and I’ve been that ever since.”

Armed with invaluable lessons and skills, Fontaine went on to work for several different independent wrestling organizations spanning a seven year career including: ECCW, All Star Wrestling, Monster Pro Wrestling (in Edmonton), ICW, CWF (in Washington State) and for the past year, B.C.’s TRW (Top Ranked Wrestling), a promotion which Fontaine co-owns with fellow wrestler, R.A.G.E.

“There is always more to learn,” insisted Fontaine. “Especially now putting on shows, it is like starting over again. You start seeing the business from a totally different aspect.”

According to Fontaine, TRW shows draw on average 150 fans and have a retro feel, with matches staying in the ring and the emphasis taken off shocking the crowd.

“I think that we are making a good change to the area because no one was doing a good family show,” he said. “It was all swearing, hardcore, blood and fighting all over the building. It just wasn’t something you would bring your family to. I think we kind of brought back family wrestling because we don’t allow swearing, we don’t have hard core matches. It is more wrestling you would have seen in the eighties.”

In between running the promotion, wrestling and also working as a truck/fork lift driver, Fontaine makes the time to pass on his skills to aspiring wrestlers. For him, the training sessions, have mutual benefits.

“For me, every time we have the ring set up and I’m in the ring with the students, I’m training too, doing the moves, trying to get crisp and work on new moves and get better and better,” offered Fontaine.

However, the lack of motivation and discipline by some students can leave the ambitious Fontaine, severely unimpressed, almost offended.

“We are just not going to train people unless they are really going to dedicate themselves to it,” he explained. “They have to lift weights and they have to have some sort of athletic background because I’m not going to waste my time on someone just to get money out of their pocket.”

But Fontaine is far from perfect. The only injury he has ever bestowed is an embarrassing tale, made even more humorous by the fact that he wasn’t even wrestling when it happened.

“It was one of the dumbest things I’ve ever done,” he confessed sheepishly. “I have a bad wrist injury that still bothers me to this day. I basically fell off the ring apron. It was a tag match and two of the guys did a move in the ring. I took my hands off the ropes for a second to kind of sell it for them, like ‘Oh my God’, and for some reason I kind of lost my balance. I tried to grab the ropes and I couldn’t. It was a high ring too, about three and a half, maybe four feet high and I just fell right on my wrist. I sprained it and tore all the ligaments. That was like three years ago now. It was as dumb as it sounds.”

Fortunately, Fontaine is not one to let a little humiliation stand in his way. The same seems to apply for aspirations of making it into bigger wrestling organizations like WWE or NWA-TNA.

“Everyone wants to work for a bigger promotion but, the reality is that it is next to impossible to get there,” he said. “With the NWA-TNA, you can go wrestle there, you can go for a tryout there anytime, but you have to pay your way down there. It’s like a $1,500 plane ticket. I’m not going to waste my money like that especially when they’re on thin ice now and almost going under. As for WWE, I know for a fact from different people that are close to them, they aren’t looking for Canadian wrestlers.”

Instead the grounded Fontaine hopes to secure some overseas wrestling gigs within the next few months and is looking forward to the Agri-Fair, a wrestling event held in Abbotsford every year. Last year’s event featured Bret “the Hitman” Hart as the main attraction.