If there’s one thing that unites four members of the WWE Hall of Fame Class of 2005, it’s the joy they take in their induction. When contacted by SLAM! Wrestling, The Iron Sheik, Nikolai Volkoff, Bob Orton Jr., and Jimmy Hart were all thrilled by the honor.

The WWE Hall of Fame will expand by at least five inductees on April 2 during the WrestleMania 21 weekend festivities at the Universal Amphitheatre in Universal City, California. The WWE announced on last week’s broadcast of Smackdown that Sheik, Volkoff, Orton Jr., Paul Orndorff, and Hart would join the 34 previous inductees. 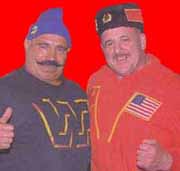 The Iron Sheik and Nikolai Volkoff

By mentioning this year’s inductees on television, the WWE introduced a new generation of fans to some of the older stars who helped pave the way for today’s wrestlers. While the name Orton may now be synonymous with former world champion Randy Orton, “Cowboy” Bob Orton was one of the WWE’s biggest stars during the 1980s. Remembered by older fans for his perennially broken arm, Orton now joins former tag team partner Don Muraco in the Hall of Fame, something Orton never expected to happen so soon.

“The first thing that went through my mind was that I could hardly believe it,” Orton told SLAM! Wrestling. “I thought it would be a lot later on. I just thought it was a little soon, not that I’m knocking it in any way, shape, or form. I was surprised. I’m really proud and I’m looking forward to it.”

Orton believes his son may one day join him in the Hall of Fame.

“If he stays healthy and everything and goes as long as we think he’s going to, then, yeah, I think there’s no doubt that he’ll be there,” said Orton.

Nikolai Volkoff, perhaps best known for teaming with The Iron Sheik to capture the WWE Tag Team Championships at the inaugural WrestleMania, is pleased to be inducted, although he is quick to point out that he is still active on the independent circuit.

“I’m still wrestling, you know, so I think I should be inducted when I finish wrestling,” said Volkoff. “But, I’m glad I’m there.”

Likewise, Volkoff’s former tag team partner, The Iron Sheik, is also honoured to be included with the many greats who have already been inducted.

“It was good. I’m very happy with them for inducting me,” said The Iron Sheik. “It was a pleasure for me and a big honour for me, thanks to Mr. McMahon. I’m very happy to be part of it. Always, the WWF was good to me. It’s the number one federation in the world.”

Jimmy Hart, billed as “The Mouth of the South” during his career, was speechless when Jim Ross told him he was going to be inducted this year.

“I was thrilled, because for nine years, I was with the WWE and I was so grateful to Vince when I got the call,” said Hart. “When I got the phone call from Jim Ross and he told me over the phone, there was a dead silence on my part. He went, ‘hello, Jimmy? Are you still there?’ That’s the way I really felt. It was a thrill for me.”

Hart has been a part of the past two WrestleMania weekends. Last year, he gave Greg “The Hammer” Valentine’s induction speech, and two years ago, he was at WrestleMania with his good friend, Hulk Hogan.

“It’s just unbelievable. I was there last year, and that was a thrill for me because Greg was the first person I managed when I went to New York. It was just so exciting to be back up there,” said Hart. “It’s just a thrill, because I still feel like that’s my home. I spent nine years there. It’s kind of like a football or baseball player playing for one team, and then getting traded to another team. You’re really inducted by the team you spent the most time with.”

So far, only a partial list of inductees has been released, fueling speculation that 2005 may be the year that Hulk Hogan will finally be inducted into the Hall of Fame. Hart hopes his longtime friend will join him at WrestleMania.

“There’d be nothing I’d love better than to be able to go in with Hulkster. He was the last person I did manage up there and we’ve been friends a long time, in and out of the ring,” said Hart. “What a great opportunity that would be for me to be inducted in the same class that Hulk Hogan went in.”

Hart is grateful to Vince McMahon for giving him an opportunity years ago.

“Where else could you have a paid vacation doing what you want to do, traveling all over the world? Vince let Jimmy Hart be himself. Nobody wrote me scripts. I got to do my own interviews. I got to be colourful. I got to dress the way I wanted to dress,” said Hart. “It’s been the greatest experience of my life.”