There is a drive to ban professional wrestling, but it is not being instigated by politicians in your local jurisdiction. In fact, it’s not even in our galaxy or time. 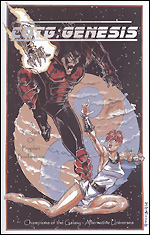 “We had been brainstorming ideas to find an outlet for our creativity and thought a new adaptation of the Champions of the Galaxy story would be a perfect product to apply our respected skills,” said co-writer Jeff Gutherz.

Along with his tag team writing partner Kris Osk, the two set out to weave a tale where The United Federation of Stars and Planets has proclaimed an end to all violent sport. Mired in this edict are a diverse roster of alien characters that partake in professional wrestling and their entwinement in a greater galactic political grandeur.

“I came across Champions of the Galaxy (COTG) in 1990 when I saw an ad for it in a wrestling magazine,” explained Gutherz, a 20-plus year wrestling fan. “Ever since I saw wrestling for the first time as a kid I have had an inherent desire to explore my creativity within the wrestling medium and COTG help me to do just that. Kris Osk and I had been fans of Champions of the Galaxy for a few years in the mid 90’s. We were amazed to look it up 10 years later and see the game thriving more than ever. We realized that the Champions of the Galaxy mythos deserved an expansion of its unique storylines and concepts.”What Gutherz and Osk have produced with the COTG universe is in keeping with other science fiction properties, by expanding the product to book format — in this case a 64-page graphic novel, features drawings by Werner Mueck and a color cover by Hannibal King. “Other fictional universes have flourished due to novels and comic books devoted to them like Star Wars, Star Trek and Dungeons & Dragons,” said Gutherz.

First published this past summer, the challenge of bringing the Champions of the Galaxy universe to page was no simple task. With a complex historical timeline, careful plotting was needed when it came to cementing when the story would take place.

“”Writing itself took 10 months,” Gutherz told. “There were no real struggles, but we can say that a concern or hurdle was an attempt to not only provide the fans of the game with a historically accurate story, but to be sure not to copy a concept or character that had already been created or covered.”

Despite the story line intricacies that are interwoven with the larger COTG universe, Gutherz believes that sci-fi fans in particular will enjoy reading the tale. “Fans of Champions of the Galaxy will definitely have an edge over the common reader, as they’ll have prior knowledge of some of the settings and alien races involved. But even readers who’ve never heard of Champions of the Galaxy should definitely be able to enjoy the sci-fi yarn.”