It would be easy for wrestling fans of the ’80s and ’90s to dismiss Jimmy Hart as a footnote in the sport’s history. Given that the list of names he managed during this period — Hulk Hogan, Bret Hart, and Terry Funk among them — reads like a hall of fame roll call, it would be easy to lose him in the shadows of the greatness of these legends. It would be easy to say that the only specialty he had was in annoying fans with his rapid-fire megaphone-enhanced ringside patter and his blindingly tacky outfits. It would be easy — but, as detailed in Hart’s new autobiography, Mouth of the South: The Jimmy Hart Story, it would be absolutely, positively, and unequivocally wrong. 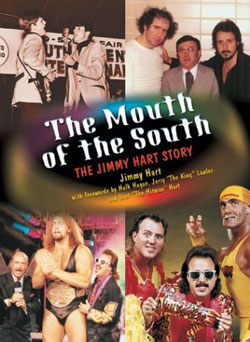 In actuality, Hart is a veritable pioneer of the modern industry who has been involved in some of wrestling’s greatest moments during his nearly 30-year career. The book covers much of his early wrestling years in great detail, which makes for a compelling read. And, as many newer fans only know Hart from his WWE/WCW days, they may be surprised by the fact that only the last 60 pages, or roughly one-third of the book, are devoted to this time frame.

Hart first describes his experience as a ’60s music star with the band The Gentrys. As part of the pop group, Hart went on the road right after finishing high school, traveling from city to city and show to show, not unlike the time he would spend years later on the wrestling circuit.

It was his musical background that got Hart involved in pro wrestling, courtesy of a chance meeting with Jerry “The King” Lawler. Shortly after meeting Hart, Lawler offered him a job helping out with promoting his local wrestling shows. Hart devotes a lot of time to recount his time in Memphis, working with Lawler and his partner, Jerry Jarrett. Though originally hired so that the company could capitalize on his Gentrys fame, Hart soon got more involved with the company, and even earned time on-screen. Ultimately, Hart became one of the company’s top draws, playing a villainous manager of a rotating stable of heels. Hart tells a lot of funny stories about his time during this era when fans were still under the impression that wrestling was real. Though Hart, whose stories include the time he was nearly smothered to death by Andre the Giant, and his unfortunate experience with a blinded midget, may argue that there was nothing fake about it.

Hart then details his involvement in the celebrated feud between Lawler and Hollywood comedian Andy Kaufman. This was one of the most successful angles ever, in that Kaufman and Lawler really helped usher wrestling into the mainstream, thanks to their well-documented appearance on David Letterman. Lawler’s slap and Kaufman’s retaliation had tongues wagging at the time, and indeed for nearly the next 20 years, as many people believed that the fight was real. Though this was exposed as a “work” in the movie Man on the Moon, at the time there were only three people who knew that this was a staged event: Lawler, Kaufman, and Hart. The three continued on with the feud even after the infamous match which, in the film, was shown as the culmination of the angle. Hart provides a lot of information about his role in these events, both in the ring, and in teaching Kaufman the intricacies of the business.Eventually, Hart’s success and popularity caught the attention of Vince McMahon, and The Mouth headed to the WWE. Hart was quickly given a prominent on-screen role, once again as manager of some of the company’s biggest heels. His larger-than-life persona was a perfect match for the WWE’s carnival-like atmosphere, and Hart thrived in the spotlight. He was instrumental in the career of several of the company’s stars, including Bret Hart, who wrote one of the book’s forewords. This section of the book contains even more funny anecdotes involving Bret’s tag team partner, Jim “The Anvil” Neidhart, the Rougeau Brothers, and the late Adrian Adonis.

Hart also talks about the work he did behind the scenes, using his musical acumen to write theme songs for the wrestlers; he was, pardon the pun, instrumental, in the company’s forays into the recording business.

But perhaps Hart’s smartest move when he was with the company was in re-establishing his relationship with Hulk Hogan (the two had worked together briefly in Memphis). Hogan, says Hart, will always be synonymous with wrestling, and vice versa. The two became friends and business partners during their days in the WWE, and Hart explains how he became Hogan’s manager in the on-screen storylines and also outside of the wrestling world. The last few chapters are devoted to talking about how this relationship grew from the WWE to WCW, throughout the Monday Night Wars, and even to this day. The book ends with a brief discussion of what Hart has been up to lately, including his recent series of matches against radio DJs, promoting the occasional wrestling show, and offering advice to today’s generation of stars. Some people may be disappointed by the fact that Hart doesn’t really go into a lot of detail about his personal life — the fact that he met and married his wife of nearly 30 years is dispatched in a mere paragraph. Others still may not like the fact that, unlike many other wrestling stars that have written books, Hart doesn’t harshly criticize nor openly insult anyone else in the business. This was a conscious decision, Hart told SLAM! Wrestling, as he feels that anyone who has been blessed with his level of success has no reason to hurt anyone else. “I deliberately wanted to avoid any negativity,” he explained. “I had a lot of fun in wrasslin’, baby. And I don’t think that (knocking someone in the book) would be right. I had too much fun to feel anger, and I wanted the book to have that same (spirit).”

But for fans who simply want to take a fresh look at one of the sport’s true modern legends, Mouth of the South: The Jimmy Hart Story is an easy, entertaining read that definitely fits the bill.

More Details: Mouth of the South: The Jimmy Hart Story by Jimmy Hart, with forewords by Hulk Hogan, Jerry “The King” Lawler and Bret “The Hitman” Hart was published by ECW Press in November 2004. The book is 180 pages long with 32 additional pages of pictures spanning Hart’s entire career.