Comrades, the revolution continues. It is with great honor that I, Commander Corey of the People’s Independent Wrestling Revolution (PIWR), have returned from the professional wrestling front lines of California (damn long march that it was) with good tidings.

Behold, my latest offering from Pro Wrestling Guerilla (PWG), entitled Taste The Radness. I assure you it is a tasty morsel with sustenance for those grown weary of feeding on Sports Entertainment gruel. 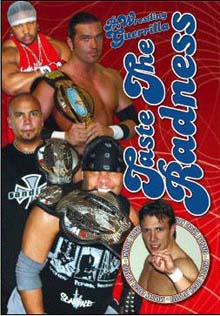 Two up-and-coming wrestlers of the PWG roster that both got something prove. Puma bombards his opponents with some vicious kicks with stunning pin point accuracy; Real Madrid should sign this kid! But Mercury proves he’s got the mettle to endure and fights back. Both athletes deliver crisp, diverse wrestling techniques, making this a fresh opening bout for the fans in attendance. Great fighting spirit gentlemen.

The Hardcore Kid welcomes us to another edition of Pro Wrestling Orangutan (I personally think Pro Wrestling Monkey sounds much better). Kid echoes his concerns over the name of the show (Taste The Radness) and the potential sexual overtones. This only further alarms Kid, baring in the mind the overwhelming ratio of men to women present at the show. Let’s move on shall we. A back and forth battle ensues between these two heavyweights. Kid shows he can catch some air went he wants to, while Slim stands tall, never taking a step back from the Hardcore one. Unfortunately for Slim, not only must he contend with Kid, but certain parties lurking outside of the ring.

Both teams are to be congratulated for presenting something you just don’t see enough of nowadays: a well paced, intelligent tag team wrestling contest. This match was a certified clinic. The Pitbulls (Ricky Reye & Rocky Romero) initially acquire the advantage with quick tags and isolating their opponent. Far from being intimidated, the Thomasellis (Sal & Vito) step up the plate and return the favour in kind with rapid tag action while keeping their opponent grounded. This was my first time checking out Rocky Romero, incredibly agile athlete. Hats off to both teams for reinvigorating tag team wrestling.

Shannon Ballard stars in this action-packed reality wrestling saga entitled ‘Survivor: Samoa Joe’. The object is simple; pick a fight with Samoa Joe and live to tell about it. Didn’t anyone ever tell Ballard you never pick a fight with a Samoan! Joe is thoroughly enjoying himself as he clobbers Ballard in all sorts of diverse and painful ways. But try as hard as he may, Joe just can’t seem to put away Ballard, who shows a tonne of fighting spirit and dishes out his share of punishment to Joe. Look for an unexpected conclusion to this match, or should I say, scrap!

Six-man tag mayhem is up next. Prior to the action, Sky gets on the mic and demands some respect (take a number) and declares Super Dragon a has-been (man, Sky really wants a beating doesn’t he), Excalibar a wannabe and Disco Machine a traitor. Sky drops some F Bombs in attempt to take the Potty Mouth title away from Chris Bosh. On to the match and it doesn’t take long for Sky to start playing head games with Dragon, constantly teasing a showdown, only to then retreat from the confrontation. All competitors are focused in this confrontation, which doesn’t take long to erupt into total chaos. Before we know it, everyone is jumping on board the PWG Express Airlines and delivering a highspot air show. All combined, these guys deliver a very entertaining contest and hell, even a gorilla gets involved! No – I said a gorilla, as in the largest member of the anthropoid ape family. Now a guerrilla is a member of an irregular armed force that fights by sabotage and – aw forget it!

Technical wrestling connoisseurs get your bibs on cause you’re gonna drool. Quance knows that defeating Dragon is almost like winning a championship title in itself. But Dragon will have none of this and intends on taking Quance back to school. Both competitors are respected tacticians, resulting in a close quarters engagement, neither athlete about to give the other any offensive openings. Holds, holds and more holds abound in this very refreshing contest. It should be noted that Quance recently left the world of pro wrestling for a career in the United States Armed Forces. For what it’s worth Bobby Quance – thank you.

Going after championship gold is always an expensive venture. The team of Lost & Ryan discovers this fact front and centre in their match against the PWG Tag champs, B-Boy & Homicide. From the onset, it’s a mind game with the champions – they can wrestle technical or they can just slug it out. Which way they’ll go, only B-Boy & Homicide know and that keeps Lost and Ryan ever wary in the ring. There’s plenty of punishment given to the challengers, who need to dig deep inside to have any chance at getting those belts. Both teams are very evenly matched, making for some crisp, agile grappling action. Once again, great tag team action.

Time for the no holds barred main event for the PWG Championship title. Pearce welcomes the champ and NWA-TNA standout home by launching a full frontal assault. Kazarian looks to his repertoire of innovative wrestling offense to counter his larger opponent. This one is all over the place, with special appearances by chair, table, tacks, crutch and more. It’s an all out war between these two, but Kazarian is kind enough to provide viewers some health advice when it comes to consuming popcorn. History is also made via the first ever face-masking call in a professional wrestling match.

Comrades, I congratulate PWG for delivering another quality DVD, with a diverse selection of matches. It should be noted that a stationary camera was used in this taping, so there is significantly less shaky cam. Again, a small but vocal fan contingent are present, helping to make the event that much more fun.

Yes, it was a long arduous trek to bring this product to your attention. I can only hope that SLAM! Producer, Comrade Greg Oliver, will find it in his heart to make a financial contribution to the PIWR footwear fund for the purchase of a new pair of boots for yours truly.

Comrade Greg Oliver’s response: Comrade Corey, in the spirit of capitalism, I direct you to our SLAM! Wrestling store to buy your own damn boots.