TORONTO – Wednesday night, Triple H got to see his big-screen debut as a vampire for the first time, and he was thrilled to be surrounded both by wrestling fans but also his family.

In town for the screening of Blade: Trinity were Triple H’s parents, the Levesques, his wife Stephanie McMahon, his father- and mother-in-law Vince and Linda McMahon, and his brother- and sister-in-law Shane and Marissa McMahon. 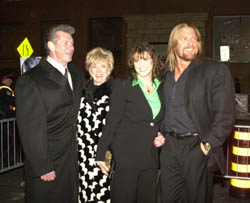 Vince and Linda McMahon, with their daughter Stephanie and her husband Triple H at the screening of Blade: Trinity Wednesday in Toronto. – photo by Mike Mastrandrea

The former (or current?) WWE champion said that having his parents in town meant the world to him. “Something like this is great, but if you don’t have the people around you in your life that you love and care about to share this with you, then it doesn’t mean anything,” he told SLAM! Wrestling.

Vince McMahon was like a proud papa, er, father-in-law, singing Triple H’s praises. “He’s a star, what do you want? He’s a megastar, both in and around the wrestling ring, outside the wrestling ring. He has charisma and things of that nature. He’s just a huge star, far beyond what Hollywood is accustomed to. We’ll be seeing a lot more of Triple H.”

In Blade: Trinity, the third Blade movie based upon the Marvel comic and starring Wesley Snipes in the title role, HHH is cast as Jarko Grimwood, an evil vampire. He does not have Evolution (who were not at the screening) at his side in the flick, but instead is teamed up with Parker Posey’s Danica Talos and great Canadian thespian Callum Keith Rennie, who is Asher.

“When I read the script, first of all, I was interested in it because it was a Blade film. I thought the other two were great,” Triple H said. “Reading the script for this, I thought it was actually even a better story than the other two. I look forward to doing things that are just entertaining. I think this is going to be an entertaining film.”

His scenes were done well over a year ago, and he hardly missed much in-ring time. Triple H swore he would not go the route of The Rock, and abandon wrestling for Hollywood. “My goal is to do both. I grew up with one thing that I loved to do in my life, and that was wrestling,” he said. “I do the thing now that I love to do. Hollywood is a natural extension of that, but wrestling is still what I love — and you stick with what brought you to the dance. Hopefully, I can make a movie here or there, and if I’m successful at it, that’s great. But I don’t intend to leave wrestling. My resume, always at the top, is going to say ‘pro wrestler.'”

The WWE has recently branched out and creating a motion picture arm of its company, and has John Cena currently filming The Marine. “WWE Films is coming out with a number of films. We have our own film division, and this is not one of those that we produced. Nonetheless, we’re very proud of the effort Triple H made,” said Vince McMahon. “It will always open new doors for us. Again, the action-adventure stars of today are only found in the WWE, nowhere else in the world. We’ll make the migration to film when we want to.”

Besides the McMahon-Helmsley clan, WWE Women’s champion Trish Stratus was in the house, along with Jonathon Coachman, who had the duty of warming up the couple hundred fans waiting in the cold for the arrival of the bigger stars.

Trish was sans-nose guard, which perhaps would explain her lack of heelishness to the crowd. Her thoughts on Triple H as a movie star? “I’m excited for him, but I’m a little jealous. But it’s cool,” she said. The vampire role was right up his alley. “I feel that his real personality is coming out.”

In a brief speech to the crowd, Triple H graciously thanked everyone for coming.”It means a lot that you would come out here,” he said. “Thanks, I really mean it.”

His wife, Stephanie, was positively beaming when she talked about Triple H. “I am so incredibly proud of my husband,” she said. When asked about separating the vampire from Triple H, she quipped, “How do you know he’s not Triple H the vampire at home?”

Away from the public microphone, Stephanie spoke briefly about the couple’s future plans. “Being on TV is certainly a whole lot of fun, but I’m having even more fun behind the scenes right now,” she said. Is a little HHH on the way? “Not, not, not yet. But I’m sure you’ll find out when it is the time.” For the time being, Stephanie is thrilled to be involved with her brother Shane’s son. “I love being an aunt. My nephew Decland is the cutest little boy in the entire world, and I can’t wait to give him a cousin.”