It’s been a long time coming, but finally there will be an occasion to recognize and celebrate Canada’s professional wrestling legacy.

The ‘Titans In Toronto’ dinner will take place Saturday, September 18 in Mississauga, just outside of Toronto. With a scheduled wrestling show in the afternoon, followed by a dinner at the Fairfield Inn and Suites Marriott, the long over due spectacle will provide participants a chance to reminisce with, learn about and honor those who have contributed to this most unique of vocations. The dinner is a fundraiser for the Schenectady, NY-based Professional Wrestling Hall of Fame. 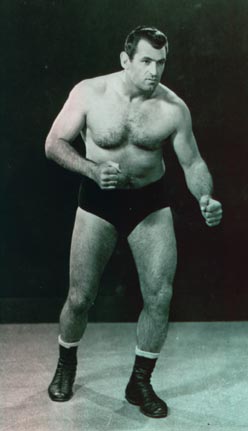 Baron Scicluna is coming up from Pittsburgh.

“Wrestling was a part of our childhood, part of our adulthood and it’s been a part of our Canadian culture. It’s a way to pay tribute to these men and women who entertained us for years.”

Oliver recalled how the idea of having a Canadian event to honor the accomplishments of Canuck grapplers was first seeded during a conversation with Andy Stefanides, son of former wrestler Ali Bey.

“We’d decided by early 2004 that we were going to do this,” said Oliver. “Andy and I went down to the Pro Wrestling Hall of Fame (PWHF) inductions in Schenectady, NY in May and the rest of my concerns and fears went away. That was the turning point for me in doing this dinner. I want to promote this Hall of Fame because it was everything I envisioned a pro wrestling Hall of Fame should be. They’re doing it for all the right reasons. It’s not some shady huckster trying to make a quick buck. This is the real Hall of Fame that is putting these guys back in the spotlight.”

With full backing from Tony Vellano of the PWHF, events were set into motion to launch the dinner. “Tony Vellano and his crew have put together a first-class operation and I’m proud to be associated with them and help publicize their ventures,” Oliver remarked.

“We at the PWHF are very excited to be coming to Toronto,” Vellano said. “Wrestling was, and is, a big part of the Canadian culture. The PWHF is glad to be part of a beautiful event in a beautiful city.”

Helping to shore up the team are Jian and Page Magen of Magen Boys Entertainment. Active in promoting live professional wrestling shows in Ontario, the Magen brothers are assuming the role of chief organizers for both the afternoon wrestling show and evening dinner. “Jian and Page are the event planners and are good at handling ticket sales, recording the event, etc. This could not have happened without their confidence in running the event,” said Oliver.

“To be a part of an event of this calibre is truly an honor. The city of Toronto is long overdue for an event like this,” Jian Magen said. “Our goals are to raise awareness for the Pro Wrestling Hall of Fame as well as have a little fun with all the different talent that will be appearing at this event. It will make for an exciting and memorable evening.”

The Magens, under their Twin Wrestling Entertainment banner, are running the afternoon wrestling show at The Galleria Mall at Dufferin and Dupont in Toronto. It is a free show that gets under way at 1 p.m. Former WWE stars Al Snow and The Missing Link are both scheduled for the card. As well, some of the legends from the dinner will be at the afternoon show as well.

With Stefanides focusing his efforts on acquiring sponsors, Oliver has assumed the role of organizing the guest wrestlers who will attend, many of whom he has personally interview and documented at this very site. “My area of expertise is the older wrestlers, whom I invited, and anything editorial, so I’m doing the program for the event. The tons of connections I have come in handy.”

Attendees will have a chance to view a wide variety of wrestling memorabilia, brought directly from the PWHF. It is a testament to the goals of the organization, with the focus on educating wrestling fans of all generations and less on making a profit.

“While it would be nice to say that we’ll be making a lot of money for the PWHF, the truth is we won’t, because they (PWHF) don’t have charitable status in Canada,” Oliver explained. “The PWHF will leave with whatever proceeds we make, but more importantly, their mission and goals will have been exposed to thousands more people through the media, the afternoon wrestling show and the dinner.”

Not far from Oliver’s mind is the pride in hosting an event where many of the guests of honor will have an opportunity to visit with their fellow legends of the ring, some of whom they have not spoken with for many years.

“It’s a chance for the wrestlers to see some old friends which from my perspective is incredibly rewarding. Seeing their faces light up as they see each other, sharing their tales; for that, we’ve setup up a little hospitality room that will be just their room, without fans, to share those stories.”

“But they also get a chance to meet the fans,” Oliver went on. “It a chance for them to reconnect. Sometimes they’ll see a fan with old memorabilia of themselves, old posters or photos and go ‘Wow that’s really cool. Can I get a picture?'”

As for whether Canadians can look forward to this becoming an annual event, Oliver made it clear that it’s a case of wait and see. “It’s too early to say. We’d like to do something every year of course, but it all depends on how this goes.”

A select few tickets are still available for purchase. Tickets are $65 each. For more information, please call 905 513-6464. Or you can email Greg Oliver at [email protected].

Check-in often here at SLAM! Wrestling as more details of this event are made public.