Former pro wrestler turned actor Pat “Bomber” Roach has died in his native England from cancer. He was 67.

Born in Birmingham, England, he grew into a 6-foot-4-1/2 beast of a man, which naturally led to the wrestling rings of the United Kingdom. He admired the wrestlers he saw as a youth, and felt fortunate to become a part of the business. 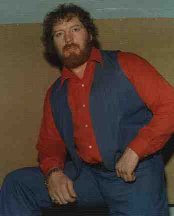 Roach was a big star in English rings, and had a stint as European heavyweight champion. On this side of the Pond, he was included in an annual San Francisco Battle Royal one year.

“I’ve got nothing against American wrestlers, but the British boys are the best, and I think that’s still probably just about true,” Roach told Simon Garfield in the 1996 book, The Wrestling. He would often come to the ring in a dressing gown, accompanied by heavy music.

However, wrestling wasn’t to be his life-long profession.

In his book You Grunt, I’ll Groan, Jackie ‘Mr. TV’ Pallo lamented the demise of British Wrestling, making specific reference to Roach. “And look at Pat Roach, a good, hard man who couldn’t get enough decent fights here. Certainly he has proved he can act. He was excellent in the television series Auf Wiedersehen Pet.”

In The Wrestling, promoter Max Crabtree said “Pat’s wrestling abilities were good – six foot six, in very good order, but he had no direction. The public wouldn’t buy him.”

The first big role for Roach in the movies was in Stanley Kubrick’s cult movie A Clockwork Orange, where he played a bouncer. He was also in Kubrick’s Barry Lyndon. His most memorable role to North American fans would be in Raiders of the Lost Ark, the first Indiana Jones movie, where he played the first mechanic to battle Indy around the plane on the desert airfield. (He also was one of the Giant Sherpas in Nepal in the same film.) Roach was in both other Indiana Jones films too, as a guard in Temple of Doom and as a member of the Gestapo in Indiana Jones and the Last Crusade.

In fact, Roach was offered the chance for the second Indiana Jones film to be the trainer for star Harrison Ford by director Steven Spielberg, but he turned the opportunity down, wanting to be known as an actor not a trainer.

Other notable roles for Roach in the movies included Lippe in the James Bond flick Never Say Never Again, Gen. Kael in Willow, Hephaestus in Clash of the Titans and Man Ape/Toth-Amon in Conan the Destroyer. He auditioned for the role of Darth Vader in Star Wars, but did not get the part.

Away from the soundstage and the ring, Roach was a real fitness buff, and ran a health club in his home town of Birmingham. “I’ve always been big, but not so heavy,” he said in The Wrestling. “But I trained heavy all my life, so I put that weight on over the years. I was never a weight lifter, and I’m still not a good one at all. But I trained with weights, and respect weights, and I think weights have a place in everyone’s life.”

His autobiography, entitled, If has a foreword by Arnold Schwarzenegger.

In January 2004, it was revealed in the press that Roach had been battling cancer for three years.

Roach died during early on Saturday. His biographer and family friend Shirley Thompson released the news to the press:

“This is to confirm the news that Pat Roach passed away at 1.20am today, Saturday 17 July, 2004, after a long struggle with cancer,” a family statement said.

“It is the express wish of Pat’s family that any funeral ceremony should remain private.

“We can only hope that those concerned will have the sensitivity to realise that this is not a deliberate attempt to exclude the press but rather a desire to protect his family.

“Following the funeral a detailed account of the ceremony will be made available.”