One of the latest DVDs to come out from the WWE home video collection pays homage to the 2004 WWE Hall of Fame Induction Ceremony, which took place Wrestlemania weekend in New York City.

The two-disc compilation covers the ceremony from top to bottom, devoting chapters to each of the 11 inductees with both portions of the inductions and career highlights devoted to each superstar and celebrity who have made their way into the Hall. 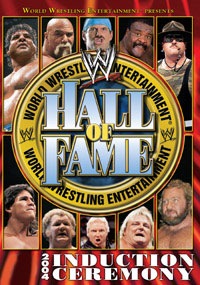 First, as much as it might seem hokey, the Hall of Fame ceremony is actually a decent watch. The video retrospectives on each of the grapplers is decent, spanning career highlights and includes some pretty good voice-over work by Michael Cole. Before the inductions begin, there is a very good retrospective, highlighting the previous inductees.

The ceremony itself provides some good entertainment, with a lot of stories shared and some pot shots taken and given. In particular, Bobby “The Brain” Heenan’s section is incredibly funny, as they let Heenan go on for 10 minutes, cutting on just about everyone, including Ric Flair.

The inductions are as follows:

Of course, what WWE DVD would be complete without a boatload of extras.

The extras included on HOF are pretty good, but as decent a line-up as there is, it could have been better. There are some great matches included, such as the street fight between Sgt. Slaughter and Pat Patterson and the cage match between Greg Valentine and Tito Santana for the Intercontinental Title, but there is a smaller amount of matches than expected.

Some superstars, such as the aforementioned Santana and Valentine, have only one match for the two honourees, which is criminal. Given how extensive the WWE library is, there is no reason not to include at least one match per wrestler. Most disappointing is Harley Race, whose match is against JYD, covering both wrestlers off. While many of Race’s matches with Flair would have been too long to include on the DVD, his match with Hulk Hogan from Saturday Night’s Main Event would have been a nice fit.

While the matches are lacking, the interviews are not. Most wrestlers have a promo spot, which have been well. In particular, Race’s promo from World Wide Wrestling is a must-see, as is Heenan’s segment on Prime Time Wrestling with Andre the Giant.

Overall, the Hall of Fame DVD is worth a look. There’s enough here that old school fans will get excited about, though younger fans will not get nearly as much out of it, given that the style of wrestling is much different today than it was in the matches on the recording. The WWE Hall of Fame 2004 Induction Ceremony gets a rental rating, leaning towards a purchase for older fans.