Due to the recognition of professional wrestling as an entertainment form in the early 1990s, the business has progressed so rapidly in terms of “insider” access and information, that it’s often forgotten how guarded the industry was when kayfabe still existed.

In recent years, countless documentaries detailing wrestler’s lives on the road and backstage have been released. Compare that to 15 years back, when it was taboo to even talk out of character. Now though, wrestling enthusiasts will have an opportunity to get a sneak peak inside the kayfabe era, as wrestling legend Jimmy “Jam” Garvin will be sharing rare backstage and on-the-road footage from his own personal collection on DVD, to celebrate the recent launch of jimmygarvin.com. 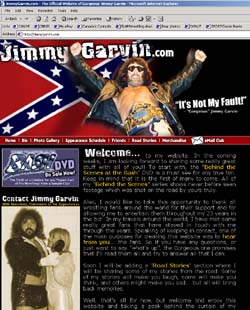 Garvin, 51, one of the most charismatic wrestlers in his day, wrestled everywhere, most notably having successful stints with World Class Championship Wrestling, Jim Crockett Promotions, American Wrestling Association and a bevy of other NWA-affiliated organizations in a career that spanned from 1969-1992, which he describes as “a 23-year adventure.”

The Charlotte, North Carolina, resident’s video camera was a common partner on the road in the latter stages of his career. When originally shooting the footage, of course, Garvin never intended to release it. It was shot for his personal viewing pleasure, something he could show his children’s children in years to come. But as Garvin began to revisit the footage, he realized it was worthwhile sharing with the wrestling world.

“One day I was watching it (the footage), and I thought, ‘You know, this is really funny stuff. I should share it,'” Garvin told SLAM! Wrestling. “You know, it’s not like other people might have a copy. There are no other copies, which makes it pretty exclusive and makes it pretty interesting because I shot it myself. So then it all came together.”

The first DVD in the series to be released on the weekend will contain behind the scenes footage of the first Great American Bash tour, circa 1987-88. Garvin believes the DVD will give viewers an insight into how the workers in the NWA arm of Jim Crockett Promotions handled such a grueling road schedule.

“I think that people are really gonna enjoy seeing stuff that has never been seen before,” he said. “Really and truly, this will show we traveled our asses off. I mean we worked hard, every night, every night, every night. And different city, different city. You know, when I look at some of this footage, we had been on the road like three weeks I guess straight, and you can see it in their (the wrestlers) faces too that some of them were pretty run down. And so you have to do something to break the monotony, you have to do something to, you know, keep yourself going, and a lot of it was just entertaining each other to make ourselves laugh, and to make our partners laugh ’cause we were busting our ass out there. There never was a whole lot of time to just kind of unwind. You always were moving.”

Mostly comprising of jokes, the DVD runs just shy of an hour, and will feature skits and conversations with all the major stars on tour, such as Sting, Lex Luger, The Road Warriors, Barry Windham, “Dr. Death” Steve Williams, Dusty Rhodes, Arn Anderson, and Jim Cornette.

Some of the notable pieces of footage are: Dusty Rhodes explaining why all the guys are babies and primadonnas Texas style, Road Warrior Hawk demonstrating a stunt he utilized as a kid to draw laughs from classmates, and a group of the wrestlers belting out a rendition of “Row, Row, Row Your Boat.”

Known to be a “party animal” both in character and in real life throughout his wrestling tenure, Garvin says the DVD will not particularly reflect that side of him.

“You know, I don’t think it will, partner,” he responded, laughing. “I don’t think it will to the extent that we’re talking about you know, because I never had any of that type stuff on film to be honest with you. Plus for the audience, there might be younger people.”

Garvin has another three future releases planned too. The next will go behind the scenes of a Pepsi-sponsored 1992 wrestling tour in Africa, which was organized by Chris Adams. Other notables on the 18-person tour were Kevin Von Erich, The Iron Sheik and Mike Sharpe.

“It’s great, great footage,” Garvin explained. “I have over four hours of footage that I’m gonna edit down to probably an hour, an hour and a half…There’s some wrestling matches in there, but a lot of it again is in the hotels, on the bus, on the road, in the marketplaces, in the freakin’ jungle, things like that.”

Also in the pipeline is a roundtable discussion style DVD featuring Garvin, his valet and wife of 32 years, Patty (known in wrestling circles as Precious), and Sunshine. In the early-mid 1980s, Precious and Sunshine were embroiled in a heated feud in WCCW, and although often not appropriately credited, were responsible for giving a whole new meaning to “catfighting” in professional wrestling.

“We’re gonna talk about the days in Texas and how tough they did fight,” said Garvin. “The girls didn’t know how to wrestle, so they kinda had to shoot because they didn’t know how to work. And I’ve got some footage of that, and it just really shows how hard they worked.”

The attractive part of this release will be the presence of Sunshine. She has been out of the public eye since departing from the business over 15 years ago.

On the subject of The Fabulous Freebirds, Garvin announced that anyone that purchases a signed 8 X 10 of him and Patty via his website automatically is entered to win a piece of Freebirds memorabilia too. The item is the infamous red-sequined Freebirds cape, which has the rebel flag imprinted on the back. Garvin will be drawing the winner on his birthday, September 25, and said he will personally hand deliver the cape if the winner is in North America.

Garvin will also be launching a monthly section titled, “Stories of the Road”, on the website, in which he tells, er, stories from the many roads he traveled.

“In that section I’m gonna tell different stories about different experiences on the road,” he explained. “Some of it is gonna be funny, and some of it is not gonna be funny. But they’re actual true stories that happened when I traveled around for 23 years.”

Now a flight captain by trade, Garvin looks forward to communicating with his fans on the website whenever he has a spare moment. He appreciates the years of support, whether he was cheered as a face or jeered as a heel, and is hopeful they will derive enjoyment from his opening DVD release.

“I thank the fans for all their support over the years,” said Garvin. “When I was heel and they didn’t like me, well that’s good, because that was the job I was trying to do. And then when Michael and I were babyfaces, they supported us all over the world. I just appreciate the opportunity that I got to entertain them, and I hope they find the tape to be a great behind the scenes look at what we did to entertain each other.”

Jimmy Garvin on his 23 years in wrestling