Sunday, June 20, 2004, in Yauco, Puerto Rico, veteran wrestler Victor “The Bodyguard” Rodriguez suffered a heart attack and died after his match. He was 38.

According to reports at prwrestling.com, Victor The Bodyguard to get involved in Ray Gonzalez’s match during an IWA show. He complained about a pain in the chest, went to the dressing room. An ambulance was called, but Victor The Bodyguard did not survive the heart attack, and was declared dead at the Metropolitan Hospital of Yauco. 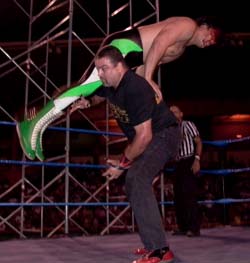 A wire service story on his death said that Victor went to the dressing room, lit a cigarette and collapsed to the ground. An autopsy is to be performed.

The 6-foot-3, 245-pound wrestler was born Victor Manuel Rodriguez Gracia on August 19, 1965, and resided in Guaynabo, Puerto Rico. He was been a pro wrestler for 21 years.

“He was a great guy, well liked and very much respected. We knew him from spending many hours in the locker room with him, and he was always very nice to us,” wrote Fidel Sierra on prwrestling.com. “He was a person that was always ready to lend a helping hand, treating everyone respectfully. His contribution to the professional sport of wrestling, especially in Puerto Rico was tremendous.”

Known as a hardcore wrestler, Victor The Bodyguard held the IWA’s Hardcore title at the time of his death. He was No. 279 in Pro Wrestling Illustrated’s Top 500 for 2003.