The new three-disc compilation for Wrestlemania XX brings together the entire Wrestlemania experience, showing just about everything you’d want to see surrounding the “granddaddy of them all”, along with a whack of extra features.

I won’t go too much into the actual PPV event itself, as John Powell has already told you all you need to know from his report on the live broadcast. What I will note, however, is that the rumours of WWE over-dubbing chants during the Bill Goldberg/Brock Lesnar match, from what I can tell not having seen the event, seem to be false. Everything from “you sold out” to “this match sucks” is in there. The match, IMO, ranks as one of the worst in ‘Mania history, with much stalling and very little action.

Now, without further adieu, onto the bonus features. 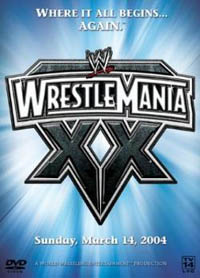 These interviews have been a mainstay on WWE releases, and while they are ultimately kayfabed, pre-fabricated hoo-hah, there is a certain, as Rene Dupre would say, je-ne-sais-quoi quality to them that makes the pre and post-match moments something cool. In particular, the pre and post-match interviews with Molly Holly work very well, as we see the last moments of her with hair, and the first moments without.

An interesting addition to the mix is Eddy Guererro’s appearance on Byte This. I’m somewhat surprised that this wasn’t saved for the upcoming Guererro DVD, and I’m not 100 percent sure it’s really needed here. Yes, it’s a cool, different extra that we rarely see on WWE DVDs, but it could’ve been better used elsewhere.

There are two Confidential pieces offered up here, the first of which is a look at the WM press conference. While the substance is mainly fluffy, as was just about everything on that show, it is admittedly a cool addition to the DVD, because it adds to the atmosphere surrounding the event.

The second piece is dedicated to the Rock n’ Sock Connection. While it starts out being a promo for the upcoming match against Evolution, the piece quickly evolves into a historical account of the teaming of Rock and Mick Foley. There are a bevy of fun clips here, and you’d be hard-pressed not to chuckle a couple times. The insight that both Rock and Foley give is tremendous, and makes this extra a must-see.

Two previously aired documentaries complete the compilation. The first, and one most of us likely have not seen yet, is the The Mania of Wrestlemania, which aired on UPN shortly before WMXX. The doc focuses in on a couple matches going into and coming out of WMXIX, mainly Kurt Angle vs. Brock Lesnar and Steve Austin vs. The Rock. The documentary is masterfully put together, showing the kind of commentary from the wrestlers involved that just can’t be beat. The narration by Jesse Ventura is also tops, and works well with the images.

The second documentary, however, isn’t quite as interesting as the first. Entitled “Wrestlemania’s Ten Greatest Matches Ever”, the piece is a clip show hosted by Ric Flair. This doc was heavily played on Spike TV, so chances are more people have seen it. The list itself is a pretty good representation of the cream of the crop, though there are a couple matches that should have made the list (namely Flair vs. Randy Savage from WMVIII and Angle vs. Chris Benoit vs. Chris Jericho from WMXVI). The list is worth a look-see, but it could’ve been a lot better had even a couple of the matches had been expanded to their full versions.

This match is from the Sunday Night Heat a week prior to ‘Mania, which was a qualifying match for the Tag Team World Title Fatal Four-Way.

Given that the end of the match is a forgone conclusion, as anyone who saw the PPV portion of the recording already has seen, it’s a mystery why this match is included. This match could easily have been skipped for the aforementioned full matches from the 10-best documentary, or maybe a match from the very first Wrestlemania.

In any result, the match itself is pretty back and forth, and is a decent enough bout; not tape-worthy by any stretch, but it’s not a complete waste of time either. Plus, depending on the extras for the Judgement Day DVD, this may be the last time we see Storm on a WWE PPV DVD.

TV ads – not a bad little extra, but you don’t need to go out of your way to see them.

Facts and photos – Some cool info here on the first 19 ‘Manias, this section serves as a proverbial encyclopaedia. Worth a look or two

Trivia – A fun and very challenging game, the depth of the trivia will trick even the most die-hard fans (for the record, I scored 7/10 and 8/10 on my two tries).

There’s no question here; this DVD is a must-have for your collection. The extras, while they could have been a bit better, are more than adequate. In particular, the Mania of Wrestlemania documentary is a must-see, while the other features are a mixed bag of should-sees and see-if-you-have-the-time. Don’t hesitate to pick up the Wrestlemania XX DVD box-set.