New Jersey reunion for wrestlers too

This weekend, the Holiday Inn in Carteret, NJ plays host to a Wrestling Reunion. Undoubtedly, the fans are excited to be getting a chance to see some old favourites, but the wrestlers themselves are looking forward to their own mini-reunions.

Martel was reluctant to agree to attend when initially approached. “At first, I didn’t know if I was going to do it. Then I found out that Stan Hansen was going to be there, Brunzy, and a couple of other guys that I haven’t seen for a long time. I think it will be good, it’ll be fun,” he told SLAM! Wrestling from his home in Quebec City.

For B. Brian Blair, the trip to New Jersey from Florida means some time away from his hectic schedule campaigning for Hillsborough, Florida County Commissioner. “I always enjoy seeing the boys. I’m sorry I missed the Cauliflower Alley Club this year, the first time in three years that I missed it. Politics has got me humping!” Blair said. 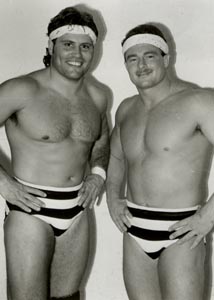 The Killer Bees will be together again this weekend.

He last saw his old tag team partner, Brunzell, at Curt Hennig’s funeral, and last some Nikita Koloff at the funeral for Road Warrior Hawk.

When some of the other names on the show were offered up, Blair marked out. “Dick Woehrle? You’re kidding me! Oh, man. Ivan Putski? I can’t wait to see these guys. I had no idea. This is going to be awesome.”

It helps that Blair has kept up friendships, perhaps the mark of a savvy politician. “It’s good when you can really look at the business and say I don’t know if I have an enemy out there. There’s nobody that I don’t like. I’m going to have a good time, bring some books, sell some books, sign some autographs — whatever I can do to make people happy.”

For Nikita Koloff, his appearance at the Wrestling Reunion was more a matter of timing. “Actually, it worked out on my schedule. I’m speaking at a church that Sunday on Staten Island. So when the guys contacted me, they said, ‘You’re going to be here already, you’re not far from here, we’d love to have you.’ So really, this just worked out in the schedule,” he said. (Nikita will be at H.O.M.E. near A.C. Community Center, 2252 Forest Avenue, Staten Island, NY on Sunday, signing autographs at noon and 4 pm)

Nikita still keeps in touch with his ‘uncle’ Ivan. “Occasionally our paths may cross at a celebrity golf tournament or something such as this. If not, then we communicate by phone every few weeks,” he said. But he finds it pretty easy to drop back into wrestler-mode when surrounded by old friends. “I think there’s a certain camaraderie that comes from being part of the business, without a doubt.”

Johnny Valiant lives in New York City, so doesn’t have far to travel at all. “I’ll be heading down the turnpike on Saturday to do an autograph session, the host a Q&A, then do my (comedy) show late in the afternoon.”

“I have pleasant memories of a lot of the guys. The unfortunate part of this business is that nobody, at least on my end, I really don’t stay in touch with anybody. I have a lot of acquaintances that I’ve met, some opponents, some guys I travelled with,” said Valiant, adding that he is looking forward to seeing Brunzell, Blair, Putski and Martel. “Ricky Martel, I was in Japan with, and I’ve seen him wrestle here in New York, and I’m very, very impressed with him as a wrestler, both in and out of the ring. Geez, there was nothing the guy couldn’t do in the ring. Very charismatic, kind of a matinee-type idol. The guy probably could have made a lot of money in the movies had he chosen to be an actor, there’s no doubt about it.”

From a fan’s perspective, it’s easy to forget that not everyone knows everyone on the wrestling circuit. “Stan Hansen, I never knew him all that well, hardly at all,” Valiant said.

The Wrestling Reunion’s publicist, Evan Ginsburg, said that 44 merchandise tables have been reserved and that everyone is very optimistic about the turnout on Saturday. “I’m hoping there will be over 500 people, but I have no idea. There’s never a huge advance for tickets for things like this. But the word is certainly out there,” he said.

Different wrestlers are on at different times during the day, selling autographs. In the afternoon, there will be a question and answer session, followed by Johnny Valiant’s comedy act.

For details on the various ticket and autograph prices, and details on how to get to the Holiday Inn in Carteret, NJ, see their web site, www.wrestlingreunion.com.