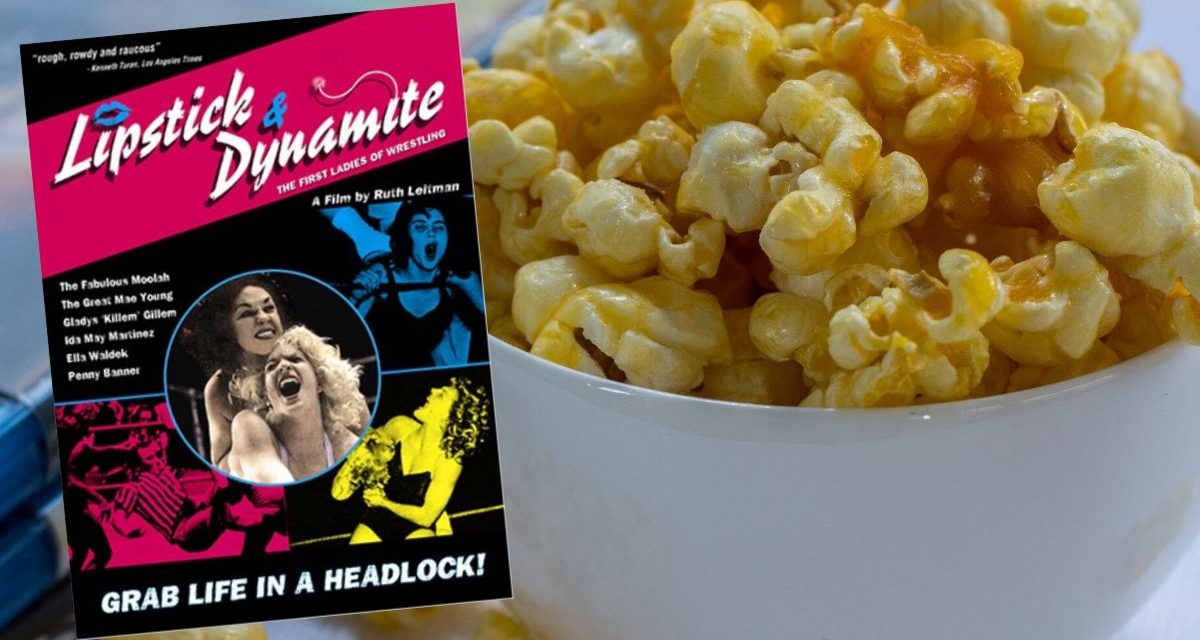 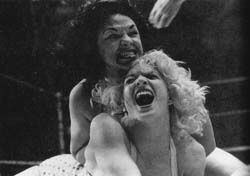 The Fabulous Moolah and Judy Grable go at it.

However, that was perhaps a testament to both the film’s cover story in the weekly entertainment newspaper NOW Magazine and the following for Leitman’s previous documentaries, Wildwood, New Jersey (1994), Alma (1998) and Welcome to Anatevka (2001).

Lipstick & Dynamite is based around the experiences of six former “girl wrestlers”: Ella Waldek (who wrestled from 1952-71), Ida May Martinez (1952-59), Penny Banner (1954-77), Gladys Gillem (1942-62), Mae Young (1948-present) and The Fabulous Moolah (1949-present). The film is well done and an excellent introduction to a little-known facet of early professional wrestling, but at only 70 minutes long it just skims the surface of a fascinating subject.

Leitman makes good use of rare archival footage from the 1950s, juxtaposing the present-day interviews with her subjects against clips of their younger selves, wearing pinup-girl bathing suits and wrestling boots, kicking, choking and body-slamming each other in front of cheering crowds. Various game-show footage too harkens back to a simpler version of ‘reality’ TV. The lively soundtrack features music by the Corn Sisters (Kelly Hogan, Carolyn Marks and Neko Case, who is actually Ella Waldek’s great-niece) – one standout track is a kicking cover version of Nick Lowe’s Raging Eyes.

All the women featured in Lipstick & Dynamite are still commanding personalities who have mostly kept the glamorous look of their wrestling days – dyed hair, full makeup, flashy clothes. However, it’s the elfin, crop-haired Gladys Gillem, looking every day of her 84 years, who really steals the movie with her staccato declarations in cheerfully unrestrained language, whether talking about her love life: “I was f***ing Billy Wolfe” or describing how her eye got partly knocked out of her head during a rough match. Gillem was known as “Killem” Gillem during her ring days and is famous for the cauliflower on the back of her head from all the bumps she took.

We find out women went into the wrestling business for a lot of the same reasons men did – a chance to get out of a dull town and see the world, escape from a troubled personal life, dreams of a shot at the “big time.” Ella Waldek was a self-described “farm girl” who began her career in her teens as a roller derby “jammer”, then switched to wrestling after a male friend invited her to a match. Ida Martinez saw wrestling as a way to rise above her abusive childhood – abandoned by her mother, raised by an aunt and uncle who resented her, she honed her fighting skills on the cousins who teased her and said she wouldn’t amount to anything. Penny Banner was a teenage waitress who grew up in “the projects” of St. Louis and started weight training and studying judo when she was threatened by a man who had tried to assault her after work one night.

The film traces the beginnings of women’s wrestling on the carnival circuit in the early 20th century. The first female wrestler of importance was Mildred Burke, the women’s wrestling champion from 1936 to 1954. Burke married promoter Billy Wolfe, who became the top booker for female wrestlers postwar, as they moved from carnivals into auditorium shows. Burke set the standards the girl wrestlers of the 1950s had to follow. She was a petite, attractive woman – just 5’2″ but with a buff, 138-pound bodybuilder’s physique. However, at the same time Burke also cultivated a very feminine public image, dressing like a Hollywood screen goddess when she wasn’t in the ring. The other women talk about being expected to look impeccable all the time too, although Mae Young was an exception. Penny Banner recalls her first meeting with a crew-cut coiffed Young in 1954: “She had on men’s shoes, men’s pants, she was smoking a cigar, she looked at me and said ‘Hi, f***face!’ You didn’t do things like that then.”

Women’s wrestling was always controversial – there were territories where it was banned outright, including New York City, well into the 1970s. When Waldek began her career in Chicago, they tested out women’s wrestling in front of all-female audiences first (while the men were outside picketing to be let in.) Banner gives a detailed description of how the women kept their bathing suits secure while wrestling – if anything “fell out” during a show it would be shut down immediately by the athletic commission.

June Byers was the women’s champion after Burke and defended the title as often as three times a week, so Billy Wolfe was always looking for new challengers. Waldek was a frequent opponent, and remembers being on the receiving end of Byers’ signature move, a vicious, stinging open-handed throat slap (clearly visible in the accompanying footage) many times. “It was just – there was no reason to do it. She cleaned me up all over the States.”

The Fabulous Moolah (real name Lillian Ellison) was the next to claim the women’s championship and she kept it well into the 1980s. Moolah got her name from promoter Jack Pfefer, who specialized in outlandish “freak show”-style gimmicks. She was originally the Elephant Boy’s valet, Slave Girl Moolah, but when she won the women’s title in 1957 she became The Fabulous Moolah.

It was quite typical for promoters to take advantage of their workers, and the women were particularly vulnerable to greedy bookers, partly because they didn’t expect to be treated as equals to the men. Billy Wolfe took 50% of what the girls earned and made them pay their own travel and lodging expenses. Moolah took over from Wolfe when he died in the early ’60s and while she paid travel expenses and only took 25% of their earnings, she proved to be hard-nosed as any male promoter when it came to the business. This is probably the biggest flaw of Lipstick & Dynamite – while a number of the women frankly discuss their clashes with Moolah, the issue of her autocratic control of the women’s title (she was nearly 60 when she finally gave it up to the WWE’s Wendi Richter in 1984) and of the careers of women who trained at the wrestling camp at her South Carolina home isn’t fully explored. There is one revealing moment, however, when Moolah, done up in violet eye shadow, hot pink lipstick and a pretty yellow pantsuit and still oozing southern belle charm at 80, describes at Mae Young’s prompting how she kept a spoon tucked in her bra during matches and used the handle to gouge her opponents in the eyes and throat. “I was bad,” she giggles.

The world of professional wrestling has always been risky, even for men – no guarantee of steady work, the constant danger of injuries with no compensation, loneliness, fractured personal lives – but women faced extra hazards like harassment and risk of physical and sexual assault. Wrestlers of both sexes had to log a lot of time on the road going from one regional promotion to another all over North America, but since women were less likely than the men to “homestead” (stick around a particular promotion for a long time) they spent even more time on the road. This lifestyle was not conducive to a stable family life – Martinez and Banner both talk openly about their abusive marriages and while most of the women had children, their families were small. Waldek had to adopt a child after a horrific stomach injury left her unable to have her own children. Waldek also provides one of the film’s most poignant moments as she talks about the night an opponent died in the ring – the girl was complaining about a head injury before the match but was afraid of reporting it to the promoter – and Waldek visibly struggles with her emotions as she talks about the fans yelling “murderer” at her afterwards.

But however disturbing some of their stories are, the guts and endurance of these women really shine through. All managed to make decent lives for themselves after they left wrestling: Waldek opened her own detective agency; Martinez became a prison nurse and a professional yodeler; Gillem tamed lions and wrestled alligators; Mae Young and Moolah still turn up at the odd WWE match; and Banner competes regularly in the Seniors’ Olympics.

After the screening, the audience in Toronto’s Bloor Cinema was treated to a Q&A with Ruth Leitman and wrestlers Penny Banner, Ida Martinez and Ella Waldek, where they cheerfully described their many injuries – Waldek quipped “I had my nose broken so many times that if I went home without tape on my nose my mother didn’t recognize me” and shared their thoughts on their descendants in the WWE. “Beautiful girls, beautiful bodies, good entertainment – not wrestling, entertainment,” said Banner. Ida Martinez also gamely did some yodeling at an audience member’s request.

The next showing of Lipstick & Dynamite is Wednesday night at the prestigious TriBeCa Film Festival in New York City.