Nearly all pro wrestling purists will attest to the belief that there are few greater places to ply your trade than Mexico and Japan. Both nations have proud wrestling traditions, and the expected in-ring work-rate — with few exceptions — is as physically demanding as it gets.

Sorel, Quebec’s LuFisto (formerly Precious Lucy) is one of few female grapplers on the North American independent scene that can boast to have experienced the unique wrestling flavor of both countries. In June 2003, she toured Mexico with all-women’s promotion Lucha Libre Feminil (LLF), and then in August embarked on a tour with Japanese women’s promotion A to Z (AtoZ), which was cut short after five weeks due to knee complications. She subsequently returned to wrestle for LLF in December, where she become the inaugural LLF Extreme champion, and successfully defended the strap on a four-day tour last month. 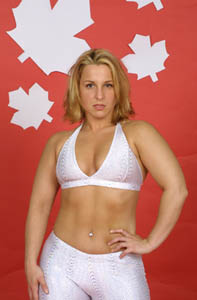 “Going to Mexico is always great. It’s one of my favourite places in the world because everyone is relaxed and they respect the work in the ring,” she told SLAM! Wrestling, in an exclusive interview last week. “The sport is shown everywhere in the newspapers, TV, and more – unlike here where the Internet is almost our only way to promote ourselves. In Mexico, lucha libre is serious stuff.

“For this tour, I had the pleasure to be featured in a main event against one of my favourite Mexican grapplers, Polly Star. I was pretty happy about our extreme match and I should go back in the upcoming weeks to defend my title once again.”

The 24-year-old French-Canadian has been successful in overcoming obstacles overseas which have proven time and again to be major stumbling blocks for many foreign wrestlers. For instance, although she is bilingual (English and French), she faced language barriers in both countries. Also, Mexico and Japan demanded significant adjustments, such as wrestling on the right side of the body (in North America wrestling holds are executed on the left side), trading holds at a quicker pace, and working an ultra-stiff style of wrestling. She believes these experiences have contributed to her already impressive package as a wrestler.

“I’m a lot more focused on my ground work than I used to be before. Also, I hit a lot harder than before. I’m now known as one of the stiffest wrestlers in the province [of Quebec],” she said with a laugh. “Every time I get in the ring, fans are chanting, ‘Stiff, Stiff!’ – I also learned how to work with a bad knee and got back into doing some high-flying stuff.”

LuFisto is applying the doctrines learnt internationally, and her knowledge of the business attained over the last seven years at the “Torture Chamber” – a wrestling school she operates alongside fellow indy worker Dru Onyx. The school, which is associated with the Championship Wrestling Association out of Quebec, opened in January and is now home to around 20 students. The students vary in experience, from beginners, to wrestlers looking for more training. She explained to SLAM! Wrestling how this opportunity came to fruition.

“The owner of CWA in Quebec wanted to have his own wrestling school. He asked some wrestlers to help him but they never shown up. So knowing that I had taught wrestling before and that I could give my students a lot with my background, he asked me to be in charge of the school. We then decide that Dru Onyx, another wrestler from Quebec who’s been travelling around the world would be the perfect match.”

The name of the school is fitting, taking into account the attitude LuFisto has towards wrestling, and she expects the students to be disciplined and willing to deal with the inevitable physical pain associated with training.

“The students must expect pain,” she explained. “Yes, you’ll get hurt and there is no way to get away from it. I like to teach them the Japanese style where we hit hard and where nobody complains. This is not ballet and I don’t want my students to learn how to dance in the ring, I want them to learn how to fight. So yes, there is discipline. However, I want them to have fun while they are learning.”

Over the years the 5’3″, 148-pound dynamo has made a name for herself as a hardcore wrestling specialist, particularly because she’s well-versed in all areas and knows how to mix death-defying bumps with subtle ring psychology. It seemed appropriate to ask her what she would say to a prospective student that walked into the “Torture Chamber” and said, “I want to be a hardcore wrestler.” Not surprisingly, she has heard that statement before, and has a very strong response.

“[I say] show me how good you are on the mat and we’ll see if you can do hardcore then,” she explained. “I also show them my scars and tell them about my injuries. Being hardcore is an extra. It won’t make you a good wrestler. Anyway, what is the point of doing hardcore when you can’t apply the moves and basics? Hitting somebody with a chair is easy; using the chair in combination with a nice wrestling manoeuvre, there is the beauty and originality of hardcore wrestling.”

Compared to previous years, LuFisto has maintained a relatively light wrestling schedule in 2004. This is because, in her words, “I’m a busy woman.” In addition to running the wrestling school, she’s increased her involvement behind the scenes with the CWA by producing graphics, video, and the website for the company, as well as working towards obtaining a diploma in Multimedia Design. She completed the course on April 23, so one can expect to see her involved more inside the ropes in the coming months.

LuFisto relishes the opportunities afforded to her by the CWA, and asserts that the company is starting to develop a strong fan base.

“I love working for CWA because… I can do a lot more than just wrestle,” she said. “I train students and especially, I work on the multimedia aspect of the company too and I love it. The crowd is great and crazy and, while they were quiet at the beginning, the fans are really into it right now. They come from all over the Province, plus some fans are even coming down from New York to see me wrestle! What’s also great is that most of them will stay after the show to thank you for the performance and the great time they had. It is a very fun place to work at.”

In June, she will be celebrating seven years in the business. She took a moment to reflect on what has been a tumultuous career, one filled with dozens of sacrifices, and myriads of obstacles.

“The journey has been crazy,” she admitted. “I’ve had a lot of pain, done a lot of sacrifices, most of the time for not much. However, I’ve learned from the obstacles and in the end, I believe it has helped me to become a better person. However, I’m mostly disappointed about the fact that I wanted to live from my work in the ring and that it won’t happen. Actually, that’s why I decided to go back to school and get a decent diploma. I’m trying to be realistic now and the pill is hard to swallow.”

But LuFisto wouldn’t trade her experiences in wrestling for anything in the world. Throughout the duration of her career she has given everything in her body and then some to prove her worth on the North American scene, and achieved her goals of wrestling in Mexico and Japan. She still has a couple feats she’s hopeful of realising before she hangs up the boots.

“The only thing I wish I can do before it comes to an end is be part of one WWE ‘dark’ match in my hometown, and win the main title of a promotion – the only one that is missing.”