It’s no secret that one of the top names currently on the independent circuit is AJ Styles. The current NWA champion had made an impact in every promotion he has been in, and left fans speechless with his breathtaking moves, lightning quick speed and overall grasp of the art of wrestling. Now those who haven’t yet checked out Styles can do so with the new DVD, Evolution of a Phenom: The Best of AJ Styles.

The two and a half hour DVD is made up entirely of matches from the popular Ring of Honor promotion. Kicking off with his debut match at Night of Appreciation on April 27, 2002 against Low Ki, the disc goes chronologically through to his NWA title defense against Chris Sabin at Wrestlrave on June 28, 2003. This is especially beneficial to those who are not completely familiar with RoH, as storylines are explained and unfold through the disc. 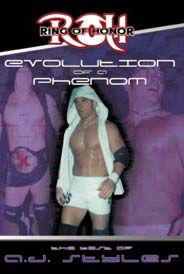 Between those two matches exist some of the best wrestling available, as Styles faces Indy favorites like Christopher Daniels and American Dragon. Daniels is featured twice on the DVD, and both matches are absolute classics.

Another must-see match is Styles’ tag title defence with Amazing Red against Mark & Jay Briscoe. The two teams feuded during the spring and summer of 2003, resulting in some absolutely breathtaking battles. Many to consider their “Night of Champions” match be the best of the bunch, but if you like the match it’s advised to check out their other battles as well.

The only match lacking commentary is Styles’ battle with Johnny Storm during a card in England co-promoted with the Frontier Wrestling Alliance. The English crowd is behind Styles from the beginning, as Styles keeps coming up with innovative ways to try and secure the Styles Clash on Storm.

That is one of the best things about the DVD, is that it allows for people who haven’t really seen much of the independent scene to see for themselves why people like Styles, Ki, Daniels, American Dragon, Storm, Sabin, Xavier and the many other indy stars have such a huge buzz about them.

The only negative about the DVD is the same complaint directed at the early RoH releases the matches are a part of — often times dark and having a few moments that it is hard to see the match, it is interesting to see the production get better and better as the company grows. Despite the lighting issues, the matches more than make up for that.

The DVD won’t be of interest to the rabid RoH collectors who own every show the company has produced, unless they want Styles’ matches on one convenient DVD. As well, this is hardly the be-all and end-all of Styles’ work. His work in other promotions is just as awesome, as well as a number of matches in RoH not included in this compilation, but this is a great introduction. Those who want to check out incredible wrestling, I highly recommend you grab a copy of Evolution of a Phenom.

You won’t be disappointed.

Evolution of a Phenom: The Best of A.J. Styles can be ordered from the merchandise section of www.rohwrestling.com. It’s also available in VHS format.