LAS VEGAS – True to form, Bobby ‘The Brain’ Heenan was not lost for words when he was unexpectedly given the Cauliflower Alley Club’s top award Saturday night.

Smiling at the podium, as he had been all night as co-master of ceremony with Mike Tenay, Heenan recovered after being introduced as the Iron Mike Mazurki award recipient by Nick Bockwinkel.

“You got me,” the plaque-holding Heenan deadpanned after the standing ovation subsided. 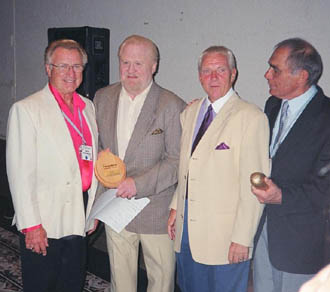 “Now I’ve got to find a place tonight to pawn this thing.” Putting away his humour for a second, Heenan then thanked the wrestlers and promoters who made his career possible, from his debut at 17 in Indianapolis in Dick the Bruiser’s promotion to Verne Gagne, Sam Muchnick, Paul Boesch, Frank Tunney and Vince McMahon.

“It was amazing what I accomplished. But I didn’t do it by myself, I did it because of these people I managed,” Heenan said, pointing out Bockwinkel in particular. “I couldn’t have done it with ham and eggers. … I was like croutons on top of a salad.”

Then, as he was leaving the podium, Heenan thought of one more line, waving the award at the crowd. “This was a surprise. I thought this would be a lot bigger.”

Another other major award of the evening was the Lou Thesz Award, which was given to Antonio Inoki by Lou’s widow Charlie Thesz. Before he died, the former world champ made up a list of five people who he felt should have an award named after him. Inoki spoke to the crowd through an interpreter, saying that it was an honor to receive an award from someone whom he considered a teacher.

Danny Hodge was given the Art Abrams Lifetime Achievement Award. As one of the greatest amateur wrestlers ever produced by the United States, the first wrestler on the cover of Sports Illustrated, a multi-time and long-reigning NWA Jr. Heavyweight champion and a stand-up human being, Hodge was a deserving winner. Humble on the podium, Hodge offered his help to anyone who wanted it.

“If there’s some of you that haven’t learned all the holds yet, I’ve got a little time,” he joked. (During the afternoon, he was seen demonstrating holds on the floor with a couple of willing victims.) The only other award that is not announced ahead of time is the Future Star Award, which was presented to second-generation female wrestler Cheerleader Melissa Anderson.

The daughter of California worker Doug Anderson, Melissa was trained by Christopher Daniels and works primarily for All-Pro Wrestling, but has also done trips to Germany and Japan to work. “What a shock it is to be standing up here in front of all you legends,” she said, finding it hard to believe that she had progressed from the days when her father would go to the matches with his “gimmick bag in one hand, me in the other.” Other award-winners, Heenan one-liners and note-worthy events from the weekend include:

Baron von Raschke: Introduced by Heenan as one of only three people that he’s never heard anyone say anything bad about (along with Ray Stevens and Red Bastien), the Baron goosestepped to the podium and thanked everyone from his dance teacher in high school (who doubled as his wrestling coach) to Mad Dog Vachon, who convinced him to be a German heel. Heenan joked as the Baron left the stage, “Seen one German, seen them all.” George ‘The Animal’ Steele: It was Jim Myers that did the talking instead of the semi-articulate Animal. “They shut me up for a lot of years,” he joked. Steele talked about how he saw the business changing to showbiz during his career, noting in particular Paul Vachon’s slapstick wedding on the old Tuesday Night Titans program and his instructions as a WWF road agent to allow a reporter into the dressing room. Steele also talked about how tough wrestlers are, and played up the Pro Wrestling Hall of Fame in New York State.

Wild Bull Curry: A posthumous award was given to Curry, and was accepted by his son Flying Fred Curry and his grandson Rocket Curry. Flying Fred brought up the Texas Brass Knuckles title, which was created specifically for his father. “He was the original hardcore champion,” he said.

Lester Welch: One of the legendary Welch clan, Lester was quick to thank his family for helping in his success, and for travelling to Las Vegas to see him receive an award.

Charlie Smith: A long-time southern referee, Smith said, “Don McIntyre told me that referees were a dime a dozen. Well, I made a lot of dimes over thirty years in the business.”

Sandy Parker: The native of Vancouver, B.C. now lives in Las Vegas. She wrestled for years, after learning the trading under Lou Klein in Detroit. She said that she regrets three things: 1) She didn’t save her money; 2) She didn’t keep a diary; and 3) She was born 10 years too soon.

Moondog Ed Moretti: Currently involved with the Portland Wrestling promotion, Moretti was a solid hand for years after coming out of San Francisco. He paid thanks to many who helped him along the way, including Playboy Buddy Rose, Red Bastien, Heenan and Roy McClarty.

Paul Jones: He was Number One as both a wrestler then a manager. Jones paid tribute to his son, who convinced him to come to his first CAC reunion last year and promised to not miss another. Limping quite noticeably, and struggling up the stairs to the podium, Jones delivered a rant of sorts at Vince McMahon. “We’ve all paid the same price, travelled the same roads, had the same roads, had the baloney blowouts and then got cheated on the payoffs.” He condemned the WWE owner for coming out and saying that wrestling is fake. A price is definitely paid, said Jones, saluting the “guys who paved the way for Vince McMahon to make millions.”

Margaret Garcia: Upon reaching the stage, she curtsied to the audience as a thank you for inspiring her while her while growing up. “Thank you for being there and have an input into my life,” said Garcia, who was known as ‘The Mexican Spitfire’ during her career, which started in 1950s.

Percival A. Friend: The former manager talked about all the happy moments from his past year, and thanked the many who made his career possible. “Many are chosen but only a few are tapped to be in the main event,” Friend said.

Ed Wiskoski: “I want to thank everyone because I really wasn’t that good,” joked the former Colonel DeBeers. He shared a wry philosophy he once was told by a wrestler: If I ever won a million dollars, I’d put it in the bank and wrestle until it’s gone.

Billy Darnell: A top junior heavyweight of his era, Darnell managed to work his way all to the top of the profession as a challenger for the NWA World Heavyweight title, despite his supposed size limitations. His speech was short and sweet, mentioning that he got into wrestling by accident.

Ann Casey: The southern belle was introduced with some great patter with Heenan and Tenay. “She could really fill out a leopard skin bathing suit,” said Tenay. “So could Jimmy Snuka,” retorted Heenan. Casey then read a poem that she wrote.

Omar Atlas: Having worked against Jesse Ventura in the latter’s first ever match, Heenan joked that “he should be the governor of Mexico.” Atlas spoke very, very briefly, after which The Brain said, “he’s been on the road so long he should be called Road Atlas.”

Playboy Buddy Rose: Paying tribute to his trainer Verne Gagne, sitting in the front row, Rose said that his training was “the toughest thing I ever went through in my life.” Rose thanked Moretti for convincing him to come to the CAC, and even paid tribute to his webmaster Kurt Nielsen.

The Ortons: A special family award was accepted on the part of Bob Orton Jr. for his father, Bob Sr., his brother Barry Orton (Barry O) and his son Randy Orton. “I was always known as Bob Orton’s son, now I’m Randy’s dad,” said Bob Jr.

After Father Jason Sanderson and Tom Burke paid tribute to the wrestlers who have died over the past year, Bruce Hart gave a 45-minute version of last year’s state of the business address, inspired by the death of his father Stu this year.

The CAC often hands out some fun awards too. Red Bastien handed the Golden Potato Award to John Tolos. “He gave me more potatoes than they raised in Ireland in the last year,” Bastien said. Tolos was jovial on the stage. “I was a king spudder,” he joked, referring to a wrestler’s tendency to hit too hard. The Golden Greek then turned a bit sombre and talked about all the friends that he misses. On the way out, Heenan and Tolos shared a kiss, after which The Brain cracked was “like kissing Mr. Ed.”

The evening began with the late Hard Boiled Haggerty’s daughter Donna singing “God Bless America” as a tribute to her father.