Stojack was a Pacific Northwest star

Recently inducted into Ring Around The Northwest‘s Hall of Fame, it’s worth pointing out that Frank Stojack, the light-heavyweight champion of the world in the 1950s, was born in Canada.

Stojack was brought into the world on February 11, 1912 in Wycliff, British Columbia, a tiny speck on the railroad map back in the day, not far from Cranbrook deep in the Rocky Mountains. 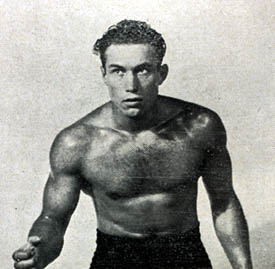 As a child, he moved to Tacoma, Washington, where he attended Lincoln High and got involved in the pro wrestling game while still in school, billed as an amateur.

According to wrestling researcher J Michael Kenyon, Stojack went on to football notoriety with Washington State and the Brooklyn Dodgers of the fledgling NFL, and then turned to the mat to make most of his living over the next 20 years.

Mike Rodgers had this to say about Stojack’s career in his Ring Around The Northwest’s Hall of Fame bio:

“Frank Stojack was one of the greatest wrestlers in Northwest history. His biggest victory was winning the Light Heavyweight Championship of the World from Gypsy Joe in August 10, 1953. He was a councilman in Tacoma and also worked in law enforcement. He served as Pierce County Sheriff, [which] he won in a 1958 election. His favorite move was an airplane spin. In 1947, he won the Pacific Coast Junior Heavyweight title, a title he held numerous times.”

A Ring Side Review program from Boise, Idaho from November 1951 shows that his fame extended beyond just Washington State and Oregon. “Stojack has the greatest following of fans of any wrestler that has appeared at the local arena,” the program reports, adding that Stojack is “quiet, reserved and courageous”, “clean living, always in first class condition” and a “fearless competitor.”

John Buff was a wrestler and referee around the Pacific Northwest for 26 years, starting in 1950, and remembered seeing Stojack work on the carnival circuit. “Frank Stojack was one of the reasons that I got into the business in the first place,” Buff said. “When I was in about the seventh grade, I was 13 maybe, I went to a carnival. He was on the platform, he was wrestling takes on all comers. I spent all my money watching he and some other guys. That was the first time that I’d ever seen pro wrestling and I knew that was what I wanted to do.”

Buff only faced Stojack in the ring once. “He was a big name around here, he was from Tacoma. He wore his football shoes as wrestling boots without the cleats. That was always kind of a trademark. He had a real hard body and was real serious. Nobody ever took Frank for anything but, he was a straight wrestler. There was no baloney. They believed in him.”

In the book, Hey, Boy! Where’d You Get Them Ears? Paul Boesch wrote:

“On a tour of the Pacific Northwest, in 1954, Gypsy Joe ran into a tough customer named Frank Stojack, a former Washington State and professional football star. Stojack took the title away from Gypsy Joe in Spokane, Wash., and toured the country, defending it.

“But Stojack, and (Al) Haft, (Fred) Kohler and other promoters, did not find the light heavyweight class profitable. Once again it faded into almost total obscurity.”

Al Fridell owned a gym in Seattle where the wrestlers used to work out at, and got into the mat game that way. “One night I was on a wrestling card down in Tacoma and [Stojack] was there. Then we had a little talk. That was about it. I was a brand new wrestler and he was an old-timer at it, he’d been around a lot longer. He looked at me like all the old-timers looked at the young guys, ‘Who is this kid?'”

Stojack was not a razzle-dazzle wrestler. “He was a nice enough guy. I didn’t wrestle him that night, but I talked to him for a little while and he wished me well. Later, when I became a police officer, he talked to me about that too,” said Fridell.

Throughout his wrestling career, Buff worked as a police officer too, and recalled Stojack’s stint as Sheriff of Pierce County, in the Tacoma area. “I think he made two terms, until he quit. He quit on his own, he didn’t get voted out. The funny thing about it was, he was big in Tacoma, his home town, he was on top of all the cards. That’s what got him the sheriff’s. But he did good.”

Fridell agrees. “[Stojack was] “always Mr. Honest, Mr. Straight”, and in the end, Stojack was basically asked, ‘Why don’t you become our Sheriff?’

“He was always a nice guy, a straightforward guy. The guys all liked working for him, I understood, the officers that he had working for him later all liked him,” said Fridell, who was in policing in Seattle for 27 years, and Tacoma for another three.